Those of you who decided to join me–and there is still time for you to still join if you haven’t–today is the day, 100 Days of Summer Challenge. Now ’til September 8th I will be going with NO SODA. As in zero, zilch, nada.

I made sure to clear out my fridge and pantry of any leftover 12 packs of coke by binging this past week lol! Luckily, my husband doesn’t care for soda so he doesn’t mind going without it at all.

I’ve been thinking. There are quite a few foods that I eat because it tastes good with a cold coke. Pizza, In-n-0ut, popcorn, basically anything salty. I have a good feeling that because I’ll be leaving the soda out, I probably won’t want to eat too much of what I ate before. This could really work in my workout and training favor.

The response for the 100 Days Challenge has be really cool. I’ve loved some of the ideas people have been sharing on Instagram and on the blog (and in my moms’ group).

To name a few. I’ve mentioned other ideas in previous posts.
I’m excited to see how everyone does and how long we can go. Maybe we can make some of things a permanent fixture in our lives 🙂

Hope you’re having a good weekend and that you decide to join in the summer fun!

–Are there things you eat because it goes good with something else? 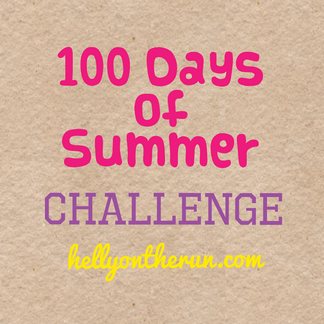 Marathon training #2 starts mid June and in celebration I’ve decided to kick-start it with a fun 100 Days of Summer & No Soda! If you’ve been with me a for a while, you know that me and soda are pretty close buddies. I am interested though, in seeing how/if my body changes through training and no soda. This curiosity is strong enough to commit to 100 days of eliminating it from my daily life. 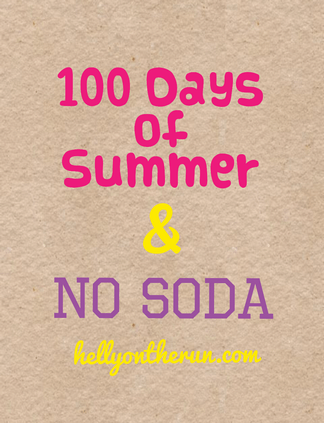 I have a good feeling I’ll go through some tough days, so, I would LOVE it if you joined me this summer. What do you want to commit 100 days to? It doesn’t have to be deprivation like me and my no soda, but it could be something like 100 Days of More Water or 100 Days of More Me (where you devote something however small to you). I know that Runner’s World is hosting a Summer Running Streak that started Memorial Day to 4th of July,–why not extend it to 100 days 🙂

I’ll leave you with a couple of days to think about it. I hope you decide to keep me company! ❤ ETA: This will start June 1st and end Sept. 8th.

–What ideas would you throw in to the 100 Days plan?

The third Thursday of the month Roadrunner Sports holds an Adventure Run. I went to my first one last month and talked about it. Yesterday, was my second time and this time I brought along my husband. I wanted him to take a glimpse into the sometimes questionable behavior of runners and we sure didn’t disappoint.

A quick recap of what the Adventure Run is all about. It’s basically an hour run where you try to go to as many places on that particular day’s map to get raffle tickets for awesome running related prizes–socks, fuel, clothing, and shoes! to name a few. Some places are close by, some places are 2 miles away. The goal is to get as many tickets as you can and make it back by the 7:30 cut off time. The Adventure Run requires a light since you’re basically running around town at night. Good times.

So, before the Adventure Run starts, there are several booths of different business, races, products advertising and wanting to show off their stuff. They entice you with raffle tickets. Nothing excites a runner than the opportunity for free running stuff. At these booths, like at the locations you visit during the run, requires you to perform a task. My husband watched as I did 5 one legged squats at one booth, and joined me for 10 pushups at another. (He did an extra 10 for extra tickets. Great guy!) He didn’t want to join me at the next booth.

Two members of my running group were manning the Ragnar Trail Races booth. If you haven’t heard of Ragnar, you should definitely check it out. Ragnar Trail is a trail race like no other where you grab a few of your closest (or not) friends and run relay AT NIGHT for about 50 miles. Sounds fun right!? I’m hoping to do Ragnar Trail or the Ragnar Relay Series which will take me and my pals 200 miles across the state of Arizona. I can’t decide which one to do!

Anyway, at their booth they were giving away extra tickets to those who could stuff as many marshmallows in their mouth. This took me back to my childhood days where my brother and I stuffed insane amounts of gum in our mouths to see who could blow the biggest bubble. I could do this.

Me deciding if I should embarrass my husband or not

Alright, let’s do this!

I didn’t win unfortunately but I did hold my own and managed to score a few extra tickets lol!

After the marshmallow event, my husband and I took a pre-run pic:

LOVE when we can run together!

5.25 miles later and without a minute to spare, we were done. These were no easy miles either as my average pace ended up being 8:55.

There was a good crowd waiting for the raffle to start and while my running group had several winners, my husband and I went home empty handed 😦 We had a great time though and laughed at ourselves quite a bit and that absolutely made everything worth it 🙂

–How many marshmallows can you squeeze in your mouth? Go ahead and try it, I’ll wait…

–What funny/interesting/out-of-the-ordinary game(s) have you won?

Don’t forgot, your chance to score a FREE pair of marathon PRO Compression socks is HERE!!