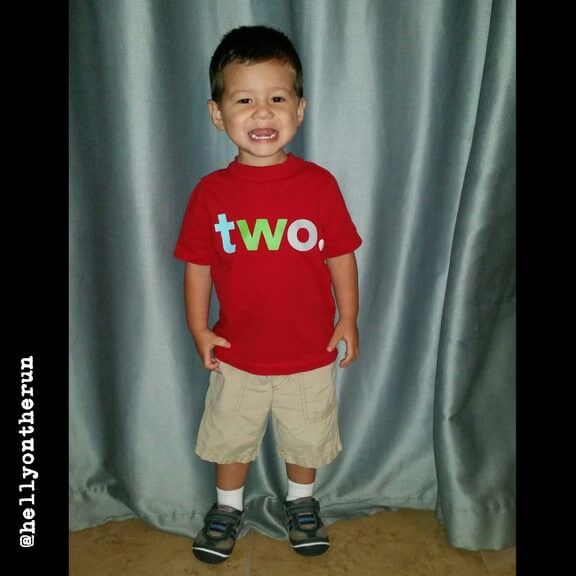 This year went by so ridiculously fast; I can’t believe I have two toddlers!! Last year, when he turned one, I thought it would be fun to start a birthday pizza tradition 😀 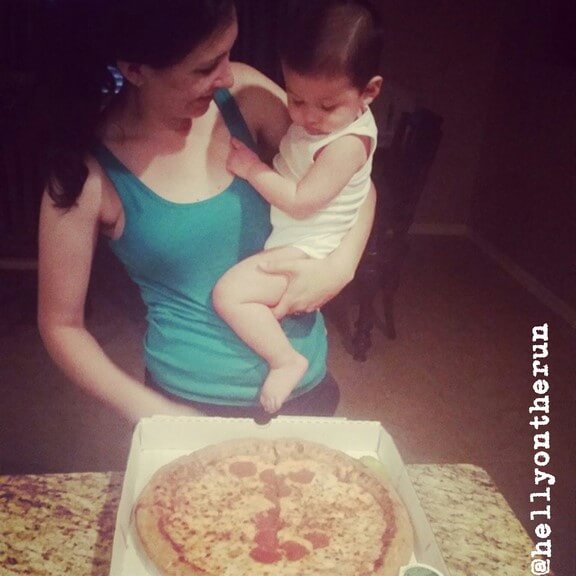 Tomorrow is his big birthday party so this mama is a party planning. 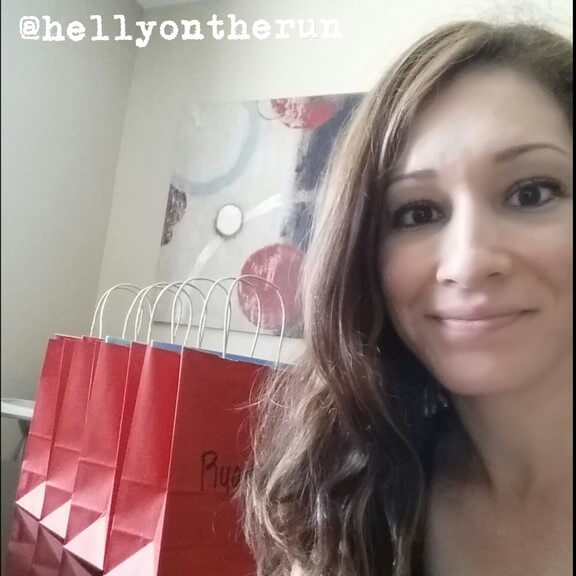 Will there or will there not be a piñata? You’ll have to wait for my Monday training recap!

Have a great weekend friends! ❤ , helly

–Did you have piñatas at your birthday parties?
–Did you mom/parents have any fun birthday traditions? Or do you have any you do yourself?

We are officially 1/3 of the way through training!!

Monday was my usual 45 minutes on the bike. I did some core strength training after but nothing too exciting.

I did double duty on Tuesday though, meeting up with the 5 at 5 crew in the morning and then with a local running store group in the evening.

The morning run was a double whammy of heat and humidity. Seriously, it was 5 in the freaking morning!! But I was still able to pull off negative splits and that made me really happy. Especially that last mile–8:49! I’ve been seeing a few 8s as of late and it’s making me do happy dances like whoa.

It was Newton demo night and I tried on a pair of Kismets for this run. I actually liked them and am very much intrigued. Anyone run in Newtons? Tell me everything.

Wednesday morning found me doing some more core strength training and then I hit the track in the evening for some speed work.

It was Christmas in July and I wasn’t sure which direction on the track I should go….

The plan called for 6x800s again and this time I was able to complete all of them with no allergy attack interruptions.

I am very, very happy with these times.

I was starting to feel the fatigue of the double on Tuesday and the evening speed work on Wednesday that waking up for the 5 at 5 Thursday morning took all the energy and convincing…yet I somehow managed to crawl out of bed and get my butt on the road.

A friend (riding the struggle bus with me) and I decided we’d do 4 instead of 5 and it was the best decision ever. We decided to take it super easy too at a 10:26 average. Both of us had plans to run again later that evening, meeting up with the rest of our run club for that month’s Road Runner Adventure Run.

The theme was beach/pool:

I’m the one modestly trying to cover my coconuts ha!

We didn’t win anything in the raffle but we had a blast nonetheless.

Friday was a major rest day. Two double runs in one week–I needed it, especially because

I was very close to reaching my #TeamRMHC charity goal so I decided to hold a fundraiser to get me over my goal amount. One of my friends in my run club had several ideas for me and ultimately I decided anything related to food would be best.

My run club has several hundred members in it, with about 80-100 really active ones. I posted on our Facebook page that I would be holding a burrito sale after our Saturday morning run and that I’d be taking pre-orders. Holy macaroni do people like their burritos!! I had 40 pre-orders on that post!!

I met up with them at 5 to see how far people were going (to gauge burrito delivery). Most were doing 8+ so I had plenty of time to get to burrito making.

My husband had ran 15 miles but started at crazy o’clock so he could help and my mom was manning the kitchen and together we cooked and rolled burritos. The tortillas were on the small side so we decided to make two smaller burritos for each order. In all, we ended making over 120 burritos!! We had a blast and kept saying how much fun this was lol!

My run club brought chairs and plopped themselves in the parking lot to eat their breakfast after their run and we ended up having a burrito tailgate party.

Since I was on burrito duty Saturday, I had to move my long run to Sunday. I had 15 on the schedule and knew I had to get an early start. I decided I’d meet up with my MRTT ladies and ran 3 miles to our meet up location. Then, with my buddy Jennifer @We’reRunningAMarathon?, I ran another 7. And finally, I ran a 5 mile route back home. It was an interesting run as I had several stops within, but I felt good the entire way and managed to stay in my 10:00/mile long run pace.

This was my biggest weekly mileage at 32.36. Luckily, I’m feeling pretty good and not fatigued with the increase in mileage…yet, ja! 🙂

How was your week? I hope you have a great Monday!! ❤ , helly

–How do you handle heat and/or humidity?
–Do you like doing two-a-day runs?
–Are you a breakfast burrito fan?

I want to say I’m all about the swag but I’m not lol! I just like a good race and if they give a medal or shirt, extra bonus. That being said, I’ve run some races with some pretty sweet swag and I’ll share them with you today 🙂

This is an expensive race, not gonna lie, but you’re paying for a great race and great swag. I’ve had a blast the past two years I’ve run the race and have actually used the jackets they’ve given. Often times, we get a shirt and it becomes lost in the dark corners of our closets, but the jackets the Hot Chocolate race gives out are of good quality and stylish–you want to use it. Plus, it’s cool being out and about and seeing someone else wearing it. I always give and get a smile when I see people with their jackets on 🙂

In addition to the jacket, you get a cup of hot chocolate and treats AND a medal! 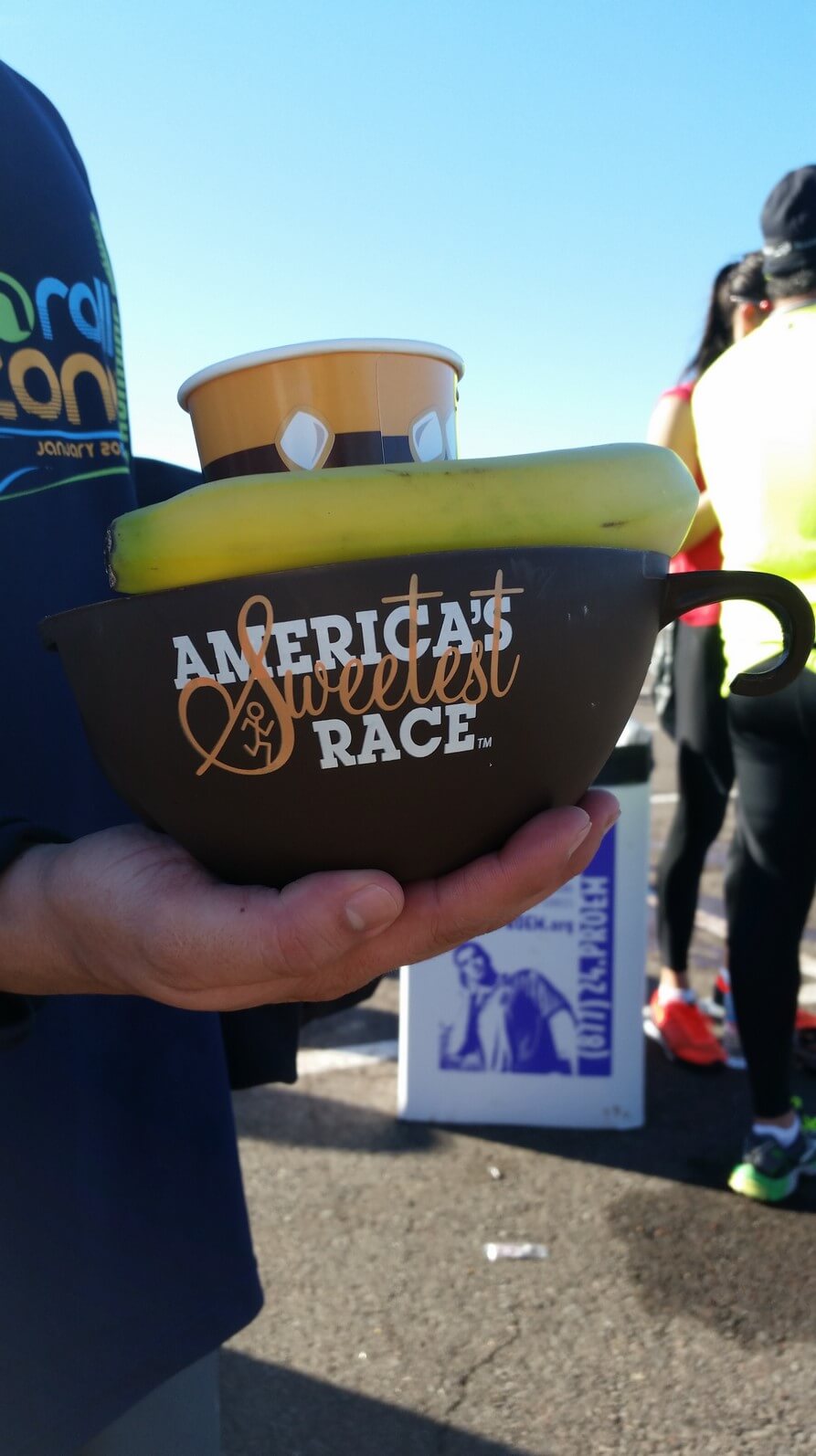 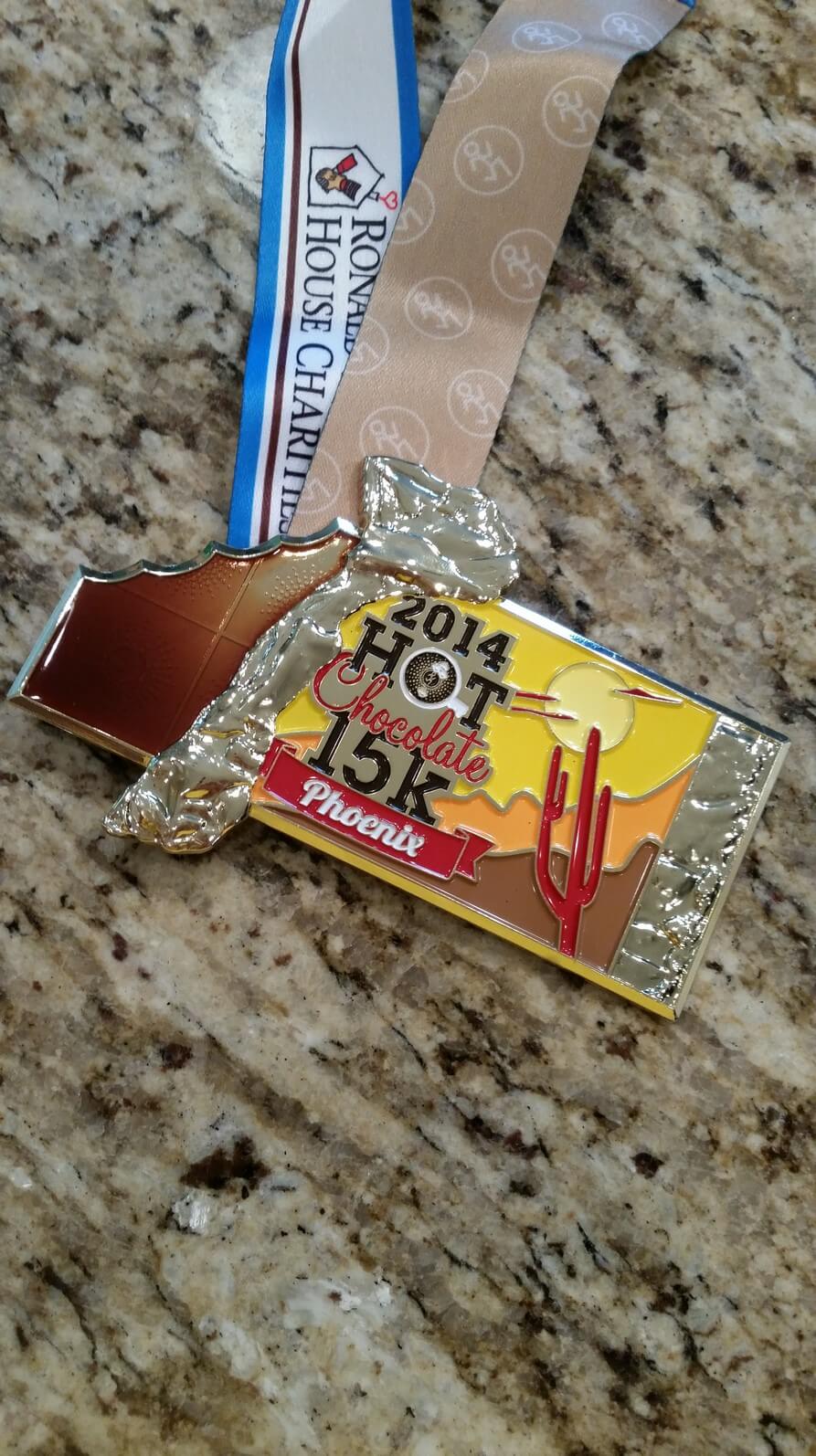 I love trail running and if you want to run a trail race, you have to do an Araivaipa one. For this swag, you get a shirt (again, another one you can actually use) and a beer cup. No medal, but I do use that cup pretty often 😀

For overall winners, you still don’t get a medal. You get a more unique award that differs each race. This is the hardware from badass Run EMZ who placed 1st female overall in a 100 miler (yeah, you read that right):

This was seriously THE funnest race I’ve run. It didn’t produce my fastest time at all but it was the fastest in that time was a-flying!

The swag for this race lives up to the hype of the race itself. Each year it’s something different and this year I got hooked up with a one shoulder bag pack–very functional and useful, a race shirt (that is very stylish and wearable), a poster of the race, and a finisher’s medal.

At the end of the race, there’s a buffet as you leave the finisher’s area. I’m not kidding. A BUFFET. They have a chip table with different types of chips, a fruit table, a cereal bar table, a soup kitchen!, a candy table–I mean, you don’t have enough hands for all the food they give out at the end.

Probably one of my favorite races ever and I wish I wasn’t so far away so I could do it every year.

First, you get your race swag from a Marine. 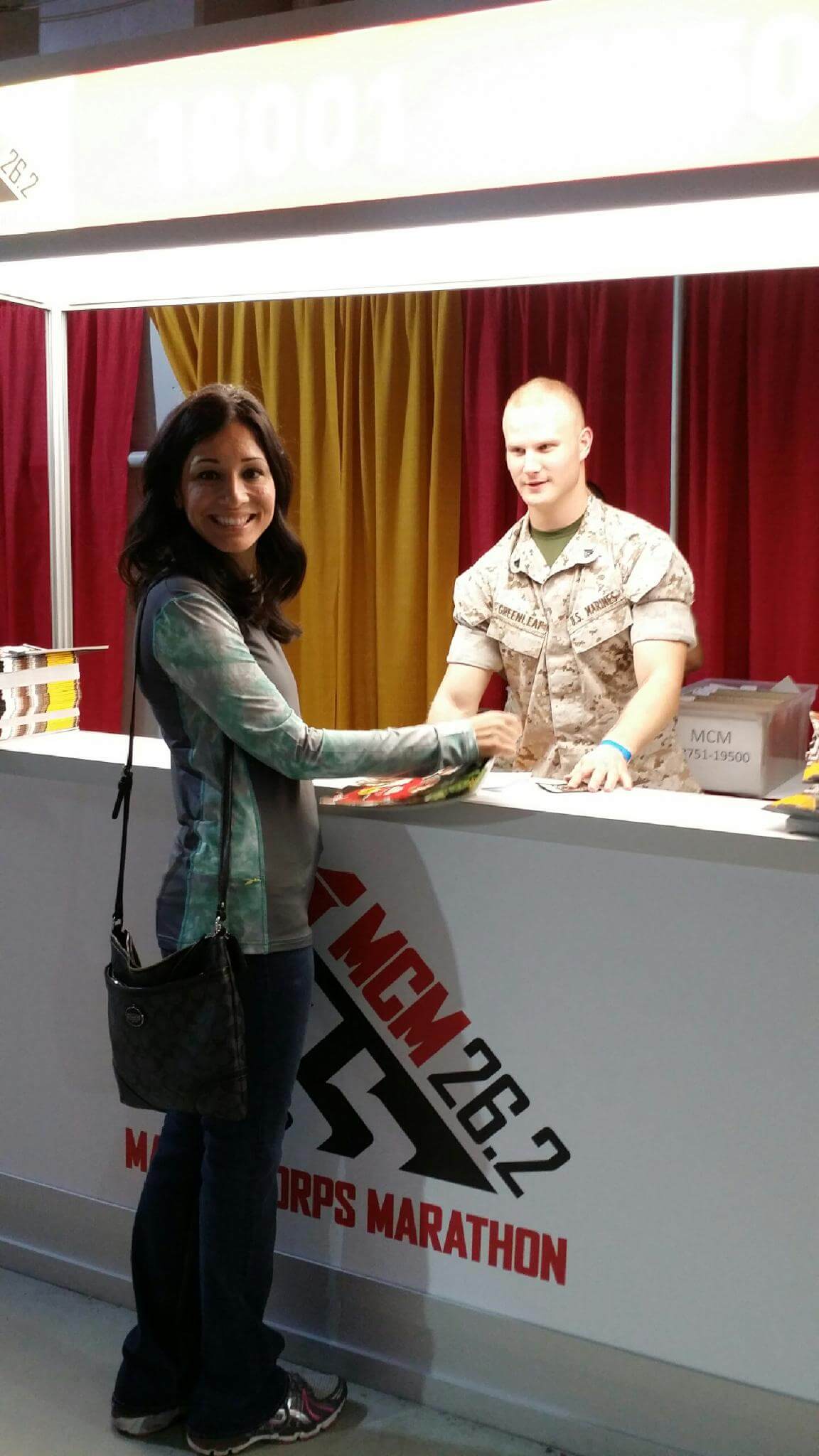 Second, I really enjoyed the Expo and they offered tons of items race related at affordable prices. Yeah, this happened. 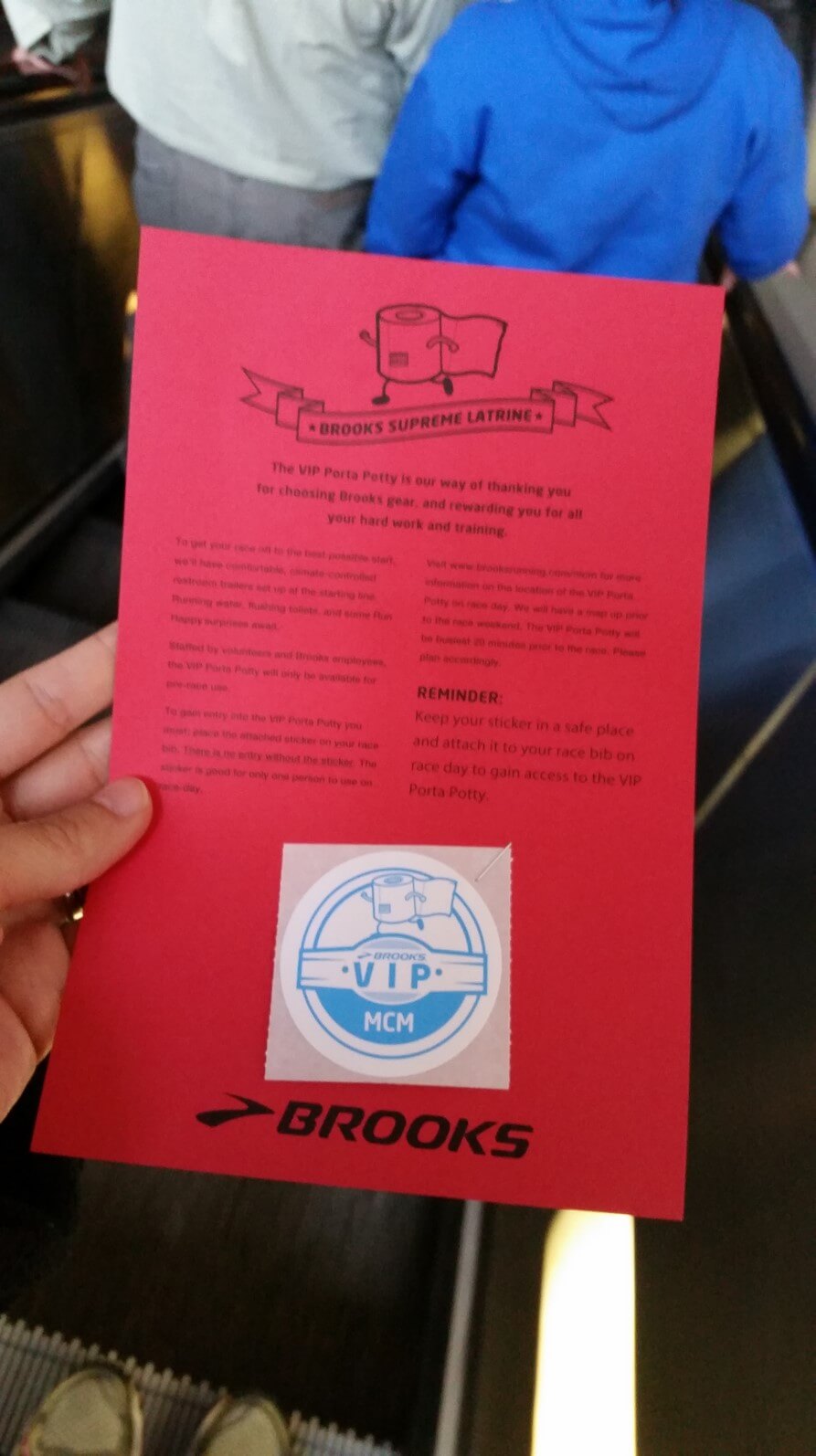 This pretty much means you spent too much money.

A lot of people weren’t thrilled with the long sleeved given to us (I actually didn’t mind it. It looked Marine-ish which is what I’d expect from the Marine Corps Marathon). But I couldn’t help myself get another piece to add to my MCM wardrobe. 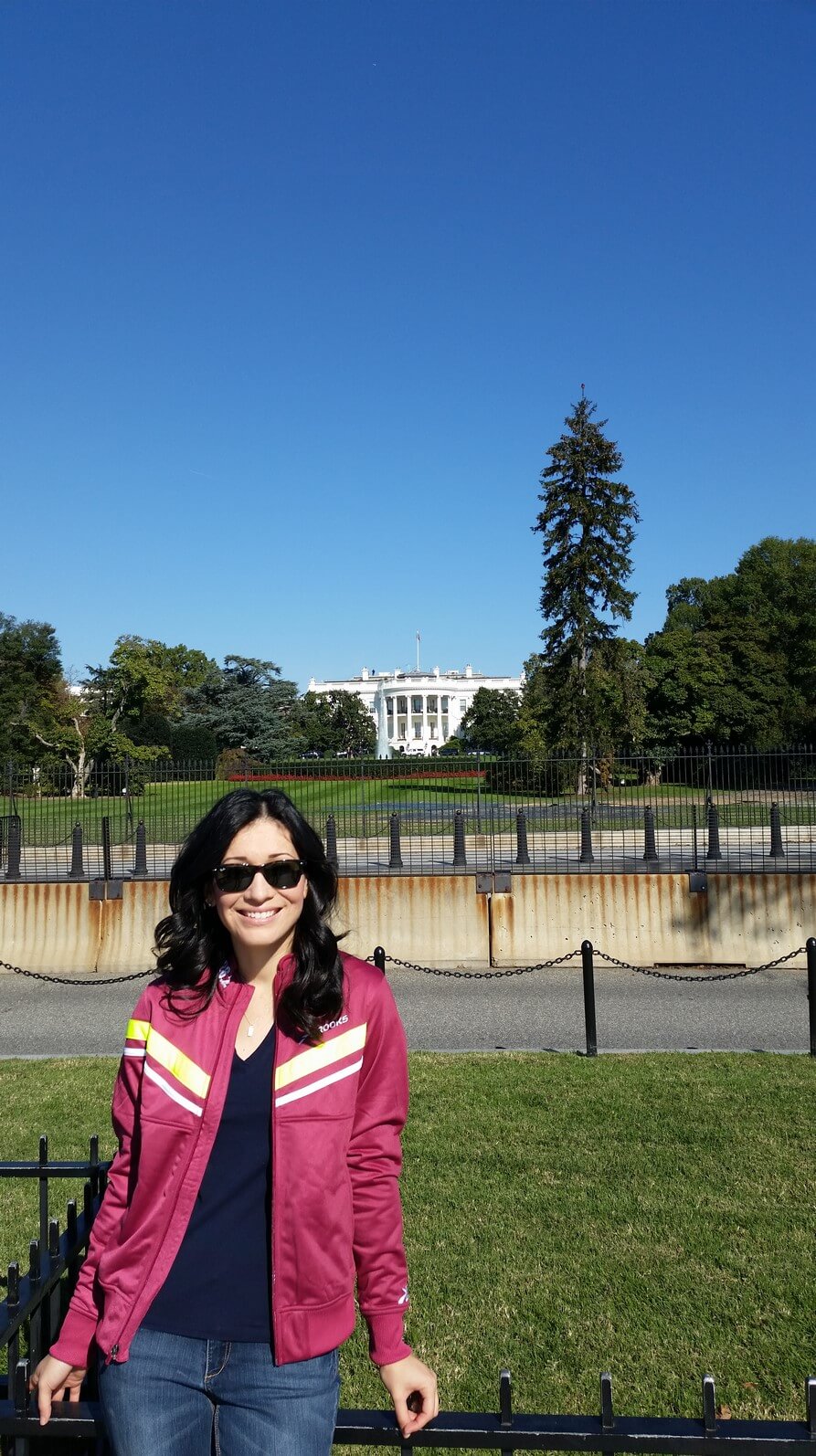 Taking my new jacket for a stroll by the White House–nbd.

And then of course, the medal. 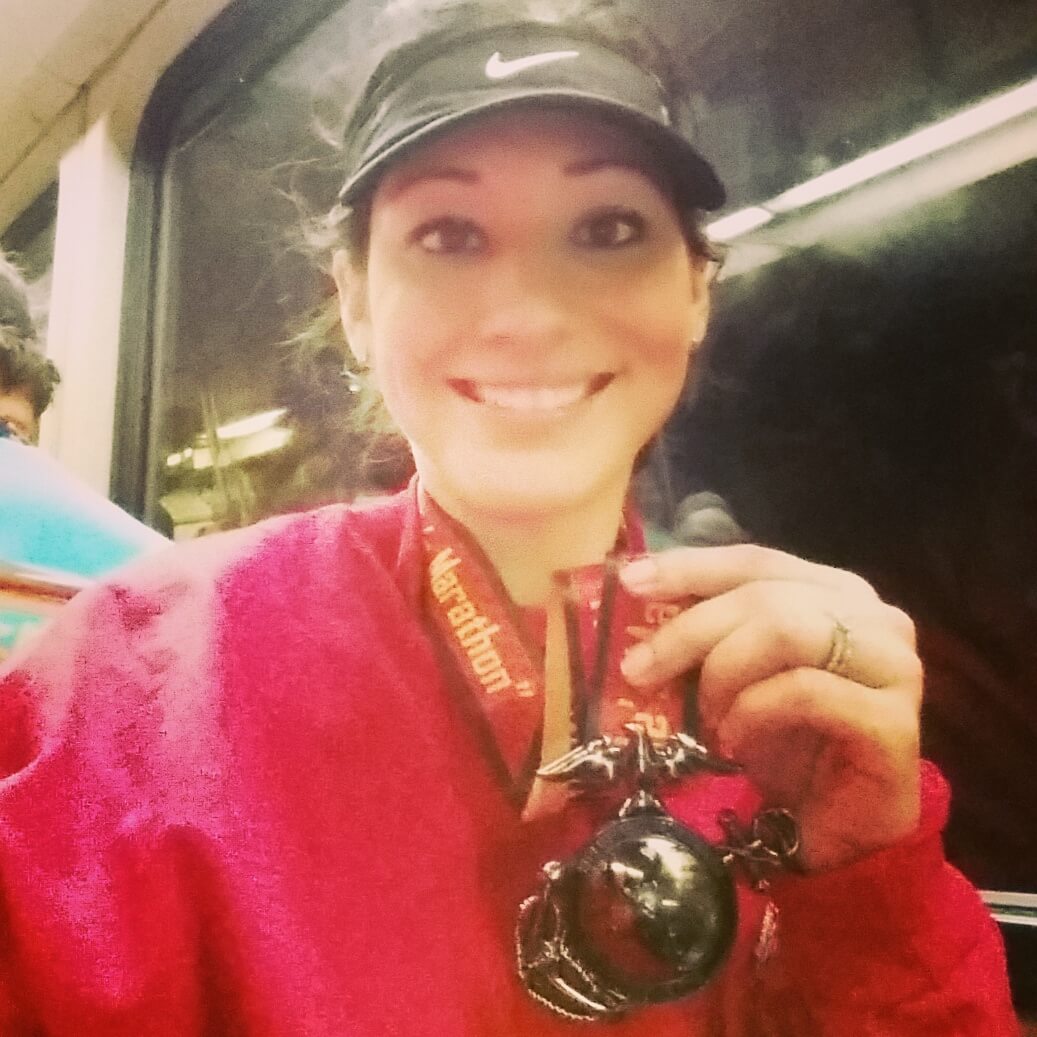 Their medals are legit. It is seriously the most awesomest medal in my rack — and it was my first marathon so there’s that too ja!! 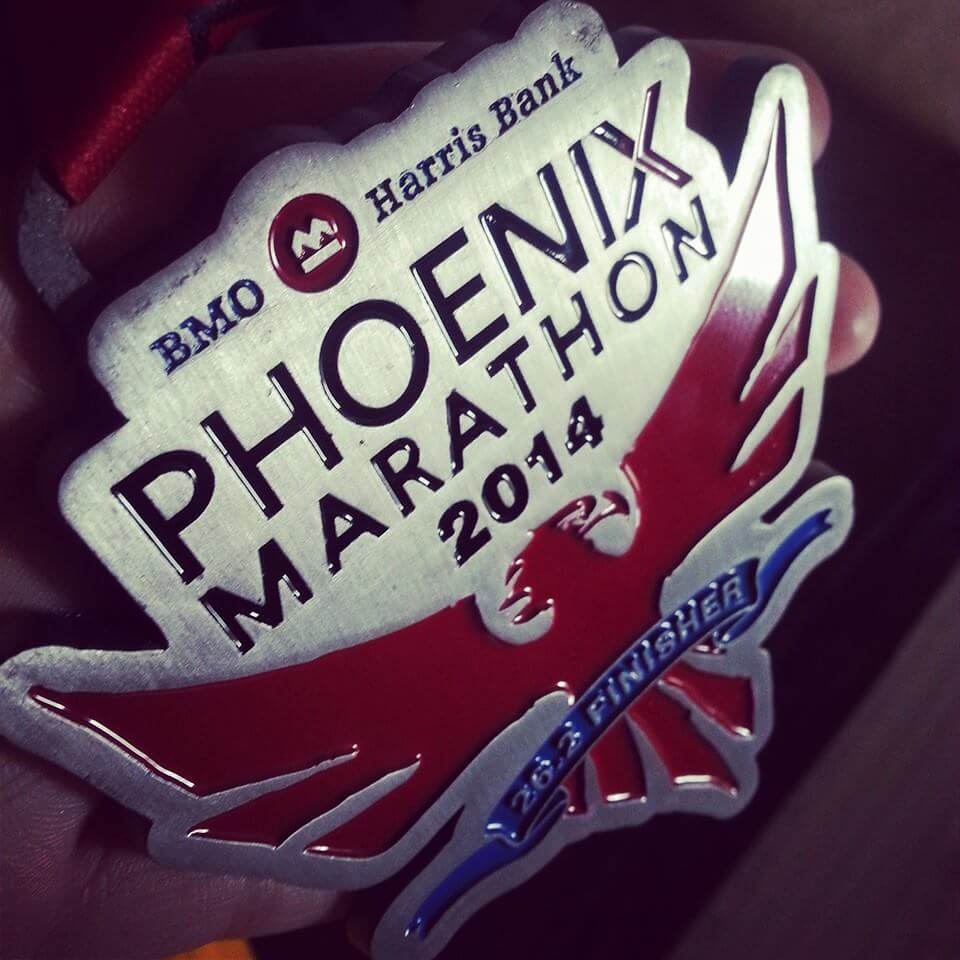 I didn’t finish 2015’s marathon (ugh.) but the race shirt they gave is still the best one I’ve gotten from a race–a racerback and good quality material. However, I’m always reluctant to wear it (because I didn’t finish the race– btw, I hate typing that) but my running friends tell me to heck with it, I trained for that marathon and ran half of it so wear it with pride. It really is a nice shirt.

There you have it! I hope everyone has a great weekend!! Who’s racing? Make sure to share your swag on social media 😀 ❤ , helly

–What’s your favorite race swag? Did the swag live up to the race?

–Any races with sub-par swag items?