Part of my recap for my training this past week includes a half marathon race.

The Gilbert 1/2 was an anticipated race because it’s local–like less than two miles away from where I live. This being the case, the route was along roads and canals that I frequent making the course advantageous to me in some ways.

I woke up and got ready, dressed in shorts and my run club shirt. I packed an extra set of clothes in case I wimped out being so exposed. (Yep, I later redressed in my car.)

I met up with my run club amigos near the start and we talked about how silly we were for being so cold–considering those in the east coast were suffering through record breaking snow.

I chit chatted with Harry (who ran a 1:34!) and he pep-talked me into running the race hard. I had been going back and forth between treating the race more like a training run–considering I’d run a marathon 4 weeks earlier) or taking advantage of the familiarity of the course and attempting another sub 2 hour–maybe even PRing.

I decided on the latter.

The first four miles were great. I was feeling pretty good and well under the pace I needed to sub 2. I made a mental challenge to try and continue to keep my splits under 9 minutes. The next 3 miles were pretty darn close but still successful.

Then I started feeling twinges of pain in my groin around mile 8 and felt myself slow down considerably. I felt that I was still on pace to get a sub 2 though and didn’t let my spirits falter despite registering the next 2 miles well above 9 minutes.

I don’t know what the hell happened to mile 11 and it wasn’t until after the race that I saw it had been an almost 10 minute mile!Somehow, I had missed hearing the beep of the split and failed to see how much my pace had slowed. To me, I felt like I had still been maintaining pace (funny how that happens huh?)

I attempted quick math in my head to see what I needed to do to finish strong but saw again, for the millionth time in my life, how much I struggle with simple addition and subtraction. I decided to just finish as strong as I could so when I saw mile 12 approaching, I began to speed up.

And that’s when my calves awoke. The worst calf cramping I’d ever experienced joined me on that last mile. I cursed and swore and yelled at myself (in my head) that there was no way in hell these cramps were going to keep me from sub 2ing.

I hopped, tip-toed, skipped–did whatever I could to cross that finish line without stopping, trying my hardest to not lose that sub 2. 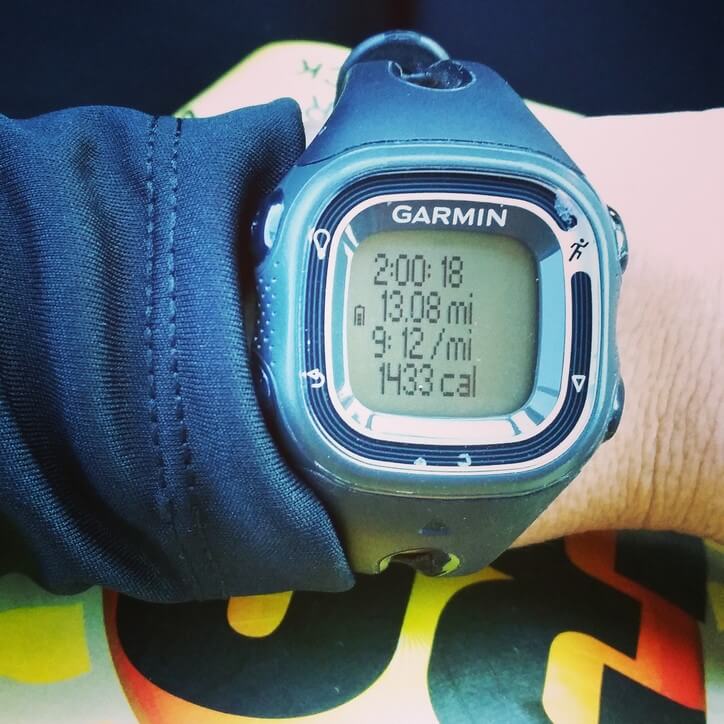 And I have absolutely nothing and no one to blame but myself.

I was upset that at mile 7, I had already been celebrating. 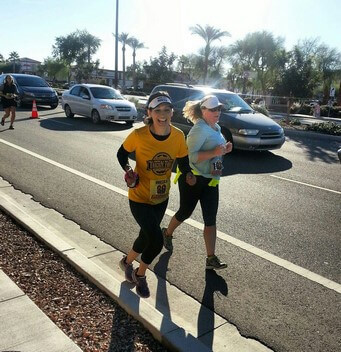 I have no idea where I was here but I apparently was still in high spirits.

It took a few minutes for me to regroup and set aside my own frustrations to focus on my friends, several of whom had achieved a major goal of sub 2ing for the first time. They had been training long and hard and it really was no surprise they’d done it. They’d trained and ran a smart race (unlike me). I took several pics with them and helped them celebrate a well earned PR. I sincerely was/am happy for them as they truly deserved that accomplishment.

When I walked back to my car, I sent a message to my husband to call me as soon as he could. He’s been out of the country for several weeks and it’s been so hard without him. I really needed him at that moment.

He called me and just like I knew he would, made me feel so much better. He let me know what a dummy I was but told me that this was what I needed. That I got much more from this race than what I would have gotten had I actually subbed 2.

And he’s so right.

When I got my sub 2 earlier this year, I had worked so hard for it. I put months of training (this was 6 months after having my second baby!), studied the course, practiced my splits, thought about it constantly. Crossing that finish line at 1:58:11 was seriously one of my biggest accomplishments ever–even surpassing running my first marathon. I was so emotional and so proud of myself.

I didn’t deserve this sub 2 and now, a couple of days post race, I’m really glad I didn’t get it.

The rest my training week prior was somewhat uneventful–well, kinda.

On Monday I met up with my co-workers and did more stadium drills. On Tuesday I ran 4 miles with my run club at half marathon pace (ja!) and I took a rest day on Wednesday.

Thursday was the last Adventure Run my local shoe store was hosting so a bunch of people from my run club met up to run it. A lot of us were taking it easy considering we had the race that following Saturday.

I was happy with the 3 miles we mapped out but as we were reaching the end, my throat felt scratchy. Then I started to feel my palms itch. And then my legs.

I was having another allergy attack.

I was able to finish and I sat down to organize my tickets for the raffle and hoped the symptoms would just fade away.

I told a friend I was feeling an attack coming but that I felt okay enough at the moment to drive myself home. I promised to text her as soon as I got there. As soon as I got home, I took some Benedryl and lay down.

The race on Saturday looming, I wondered whether or not I should run it. But yeah, we know what happened lol!

I’m frustrated that these attacks keep happening and that I’ve never gotten a clear explanation on what causes them. The doctor said it was just Exercise Induced Anaphylaxis and that there are really no preventative measure besides not running. (Yeah, no.) He suggested I take allergy medicine prior to each run but I don’t like that idea. It figure it’s just something I’ll have to deal with. It doesn’t happen every time I run or exercise and luckily I can feel the symptoms as they arise and take care of it as soon as they come. It’s just scary and frustrating.

Anyway, how was your running weekend?

Have you ever had a character building run/race? What are some things you’ve learned from running?