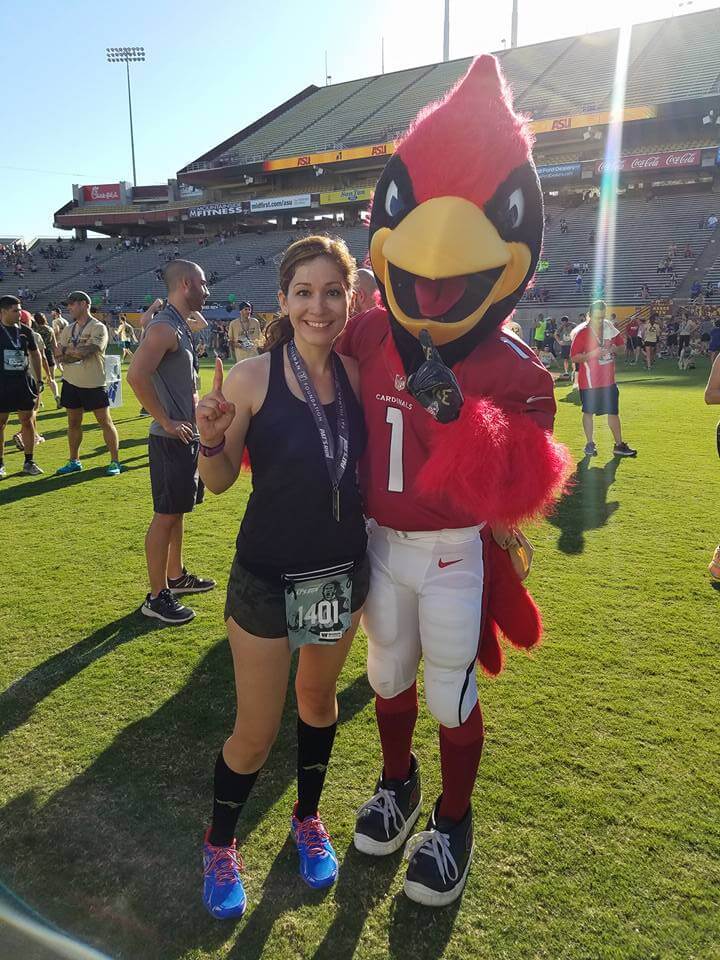 Happy Marathon Monday!!! Wow, how incredibly inspiring was this morning? I was lucky to be able to watch on t.v. and track friends online. I could tell that the heat affected many but there were some who still rocked it despite of. Congrats, Boston finishers!!! #jealous ❤

Okay, for those of you have been reading for a while, this will not come as as surprise. Two weeks of logging my food intake was…..not pretty. I’ve always been incredibly honest about my eating habits. It’s the hardest part of fitness for me by faaaaar. I can workout like no tomorrow, but when it comes to food, I have THE WORST self-discipline ever. 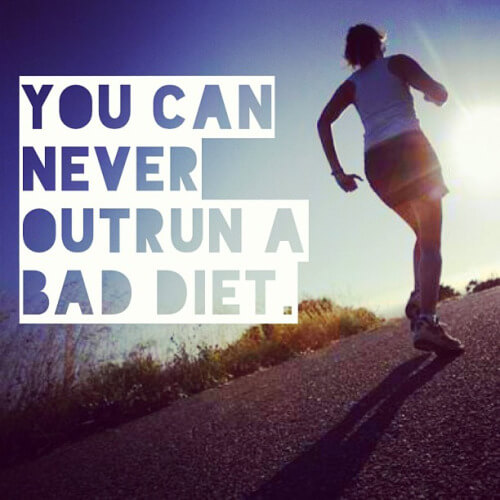 My coach wanted me to log two weeks’ worth of food entries to see what she was working with. I’m not sure to what capacity she’ll help with this part of my training, but you’ll soon see that ANY help at this point is well needed.

I’m not this bad anymore, I swear. I’m down to a single row of just Coca-cola

I wanted to be honest, and I was from the beginning when I told her my diet sucked. I didn’t try to really “clean” up my food intake during the two weeks because I wanted her to see how I really eat. I was definitely embarrassed some days, because I knew she’d be seeing that entry at some point, but maybe that was a good thing? I also was forgetful, not because I didn’t want to put in what I ate (I swear!) but having to input all my meals was tough in what’s always a hectic day in my life, lol!

Okay, here’s a peek of what we’re dealing with here. (These are not consecutive days, btw–but they might as well be, lol) 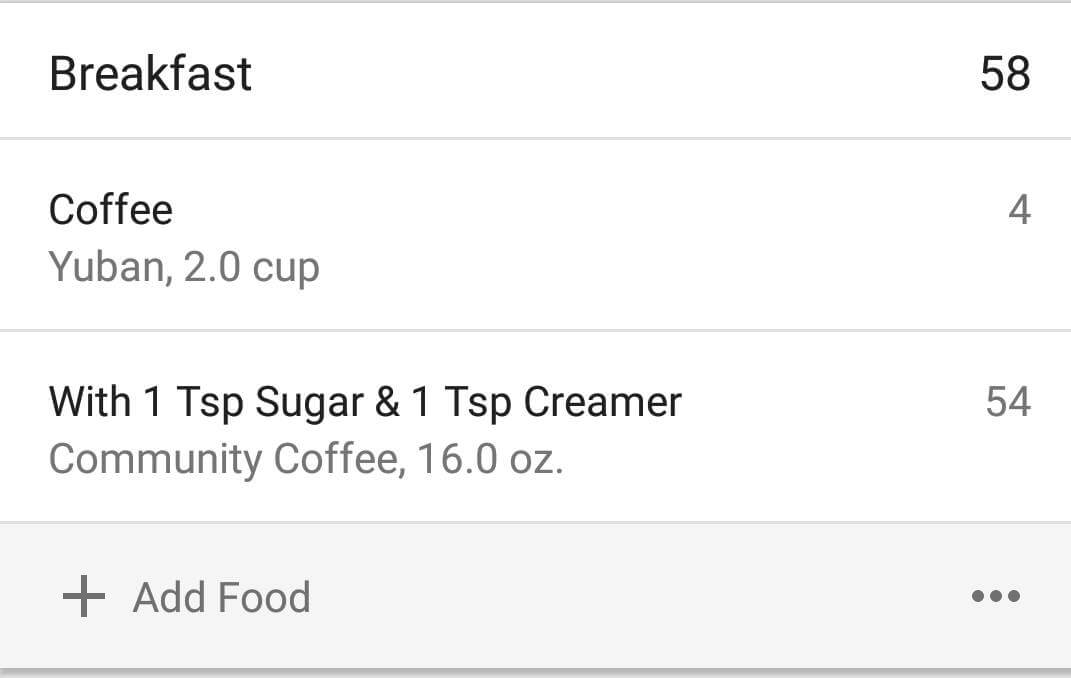 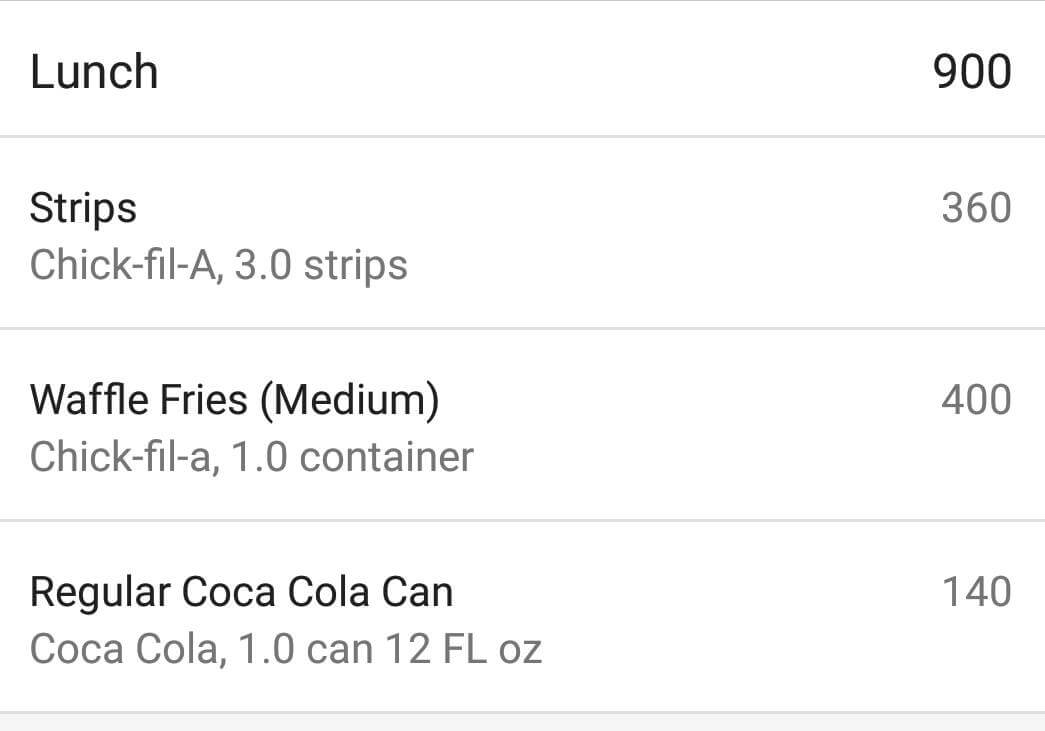 coffee for breakfast, again…..and believe you me, I wanted more than 4 slices of pizza for dinner

Another winner of a day below…. 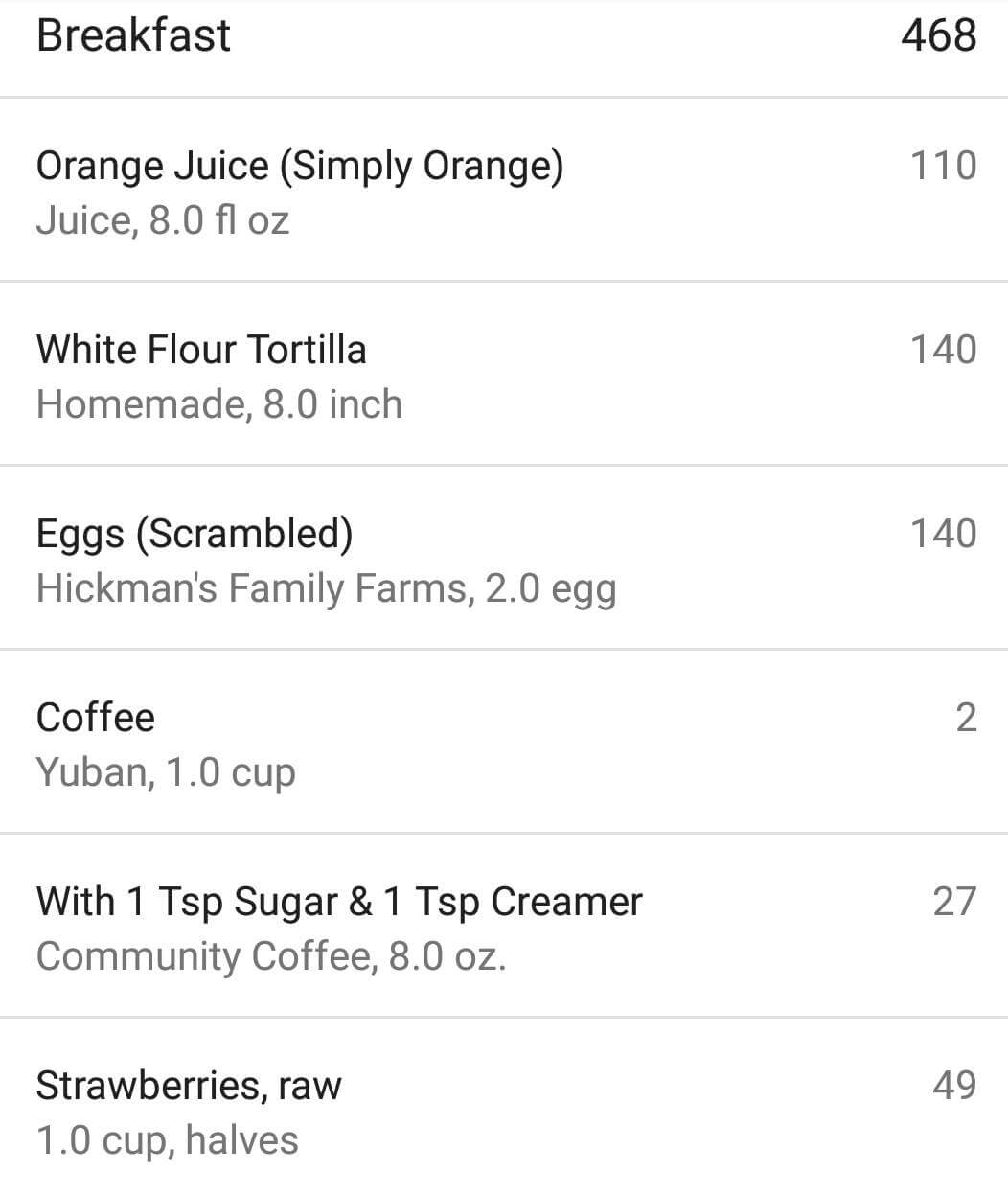 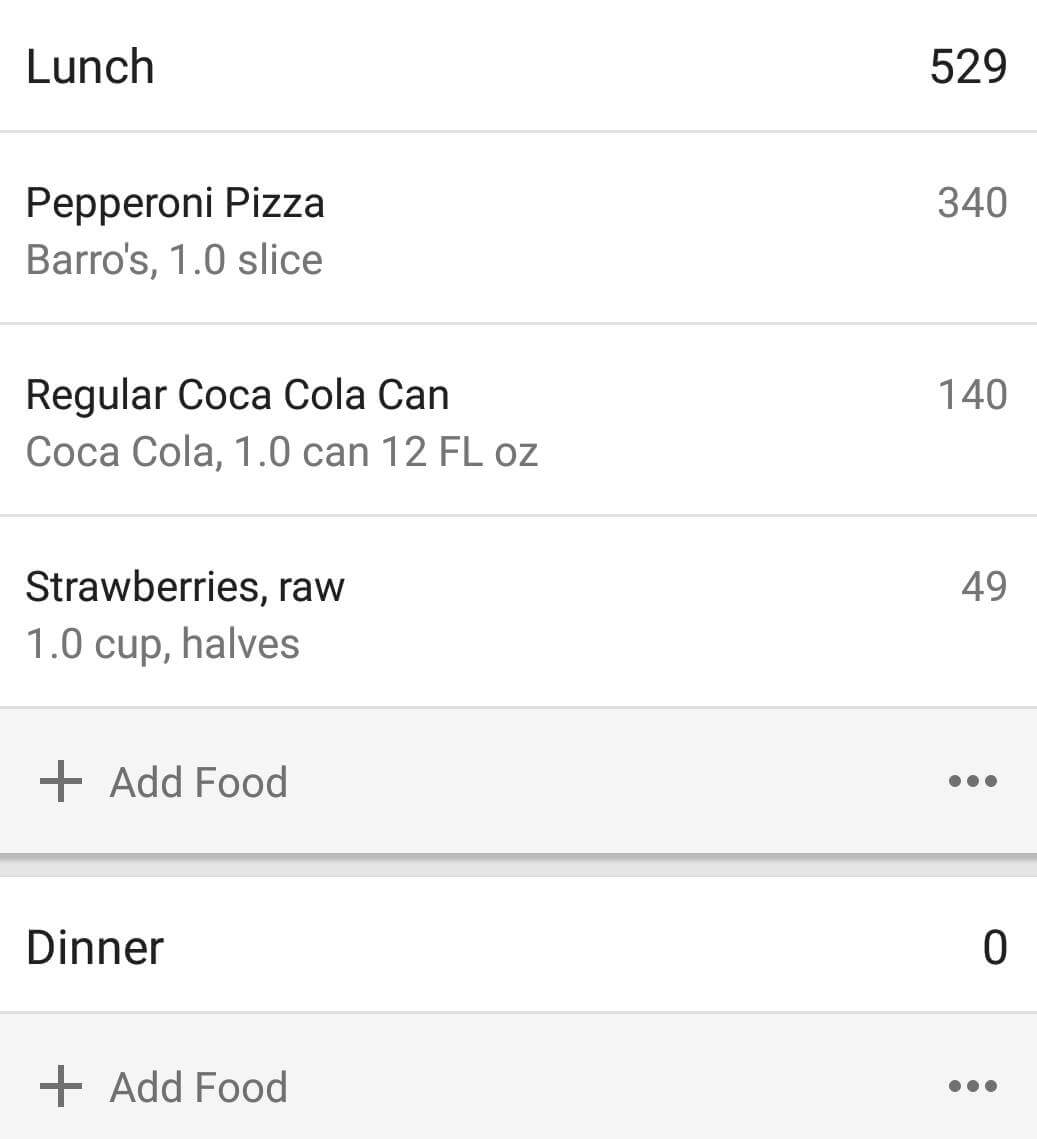 Well, I like pizza…as you can tell. The thing is, there’s this place called Barro’s Pizza that has uh-mazing lunch specials–like 2 huge slices and a drink for $4.25!!!

In all honesty, I feel like logging in my food has actually helped in a way. I see first hand how many calories each thing is which is new to me. It does make me a little more conscious of what I put in my mouth.

But at the end of the day, I know I like bad food. And I know that the only way I can better my diet is to keep my goal in front of me everyday. If I didn’t have a reason to change my diet, I honestly wouldn’t. Do I think changing my diet will be the difference between BQing or not BQing? I don’t know; but, I do know that I don’t want to attempt to BQ the rest of my life. If I can do everything I can, and set myself up for success on my first try, why wouldn’t I give it a shot?

It’ll be hard, just like trying to run 8 minute miles for 26.2 miles will be hard–but how does that saying go?

Hard is what makes it great.

–Do you struggle with your diet?

–How often do you eat pizza?

–What tips do you have for me to help curb my love of fast food and soda?

I’ve always been an active person. For as long as I can remember, I was running, playing basketball, throwing a football–doing something. In that aspect, I’m a natural athlete.

BUT, I’ve never been really good at any one sport. I could do most pretty well, but excelling? Yeah, no.

There were times when I wished I was the star, the go-to one on the team, and I think maybe I did have it in me to be that person. But I knew I was the reason I wasn’t.

Self-doubt is a killer.

Basketball was my sport in high school. I was a gym rat and lived and breathed basketball. I went to every open gym and practiced my shot, and I had a very good shot (still do 😉 ). You’d think I was the star of the team.

But, when it came to game time, I would always choke. I would get so nervous that I would often pass instead of shooting.

When I started running a couple of years ago, I knew that I wasn’t the best/fastest runner out there, but I also knew that like with basketball, I could get better if I practiced. I’ve seen myself become faster as time has passed and my confidence has grown.

Yet, with qualifying for Boston being “the big game,” I’m nervous I’ll choke. Again.

I knew I needed help if I wanted to qualify for Boston. Not so much because of the time needed, but because of the belief needed to achieve it. For me, qualifying for Boston isn’t so much about running the actual race, but believing I can actually get there.

My coach is Susan Loken and her coaching tag line is Believe Train Become. When I was recommended to her and saw it on her website, I fell in love with it, and with her, instantly.

“The first step in achieving any goal is to believe – believe in your purpose, your potential, and your ability to succeed. That is the basis of BTB Coaching.”

I wanted a coach who would challenge me, not by giving me a prescribed pace, but to ask me, “What. Can. You. Do?” Because I have a tendency to sell myself short.

Before the DBacks Race Against Cancer 5k, I asked coach how I should run the race.

You know what? Had she told me to run XX pace, that’s what I would’ve done. And I probably would’ve never tried for a sub 7 minute mile (and I wasn’t really trying, I was just running as fast as I freaking could because that’s what she said to do in mile 3, LOL).

This morning’s track workout was a doozy. It was a Ladder Workout, different to the ones I’ve done before (by distance: 400, 800, 1200, etc). This was by time…and by effort. Again, I wanted to know WHAT PACE I SHOULD RUN. But coach didn’t want me to worry about my watch, she wanted me to start at half marathon pace for 5 minutes, and try and go faster on each interval. For SIX MINUTES I ran under a 7 minute pace and for ONE FULL MINUTE, under 6!!!! Never in my wildest dreams did I think I could run this fast. That is the gosh darn truth.

But it’s not so much about the times, it’s about how I didn’t hold myself back. It’s these baby steps I know will help me face St. George head on–without fear.

It’s early on in the training, but I know that having a coach look after me, helping me tackle paces I’ve never done (and safely), while also helping me *believe*, will get me that BQ ticket–and something even more along the way ❤

–Have you worked with a coach before? How was your experience?

–Do you tend to hold yourself back? How/what do you do to negate self-doubt?