I’m not lying when I say I’ll be riding this high for quite some time. I still can’t believe last weekend, last month. If you missed my PR HALF MARATHON recap, read it here

I wanted to share a few more awesome moments from the race. It really was such a perfect day. The weather was amazing, all my friends were there, and to finish off with a good race–it just doesn’t get better than that.

Notice his pink water bottle. He borrowed mine for good luck ❤

and I love it so much. It makes me so happy that he loves running as much as I do.

I mentioned in my recap that I “roared” my way into the finish line. I wasn’t lying.

Early bird pricing for Phoenix Marathon is already available and you bet I’ve signed up!! Come join me on what is an amazing race with fun people (read Carlee’s post on how fun running with friends is 🙂 )

Great course!! (The half starts at the mid way point of the full.)

And the post race festivities are pretty epic. They seriously hook runners up!! I wasn’t hungry when I finished but if I had been, I would’ve been more than taken care of. There was french toast (like legit, thick, yummy toast), hot dogs (turkey options), bar-b-que, fruit galore, ice cream, chips, milk….it was a serious after party.

Have a great weekend everyone!!

–Do you have a funny finish line picture? Were you making a face, dancing, dying?

For the 3rd weekend in a row, I was able to snag a PR! I can’t believe the month of February. Can’t.

And here are my splits: 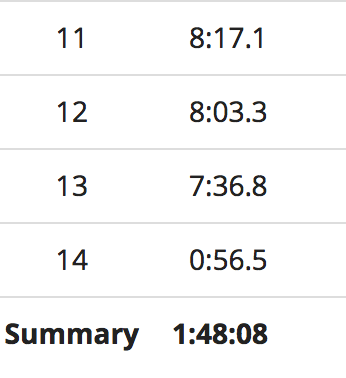 For those willing to hear the long version, here goes:

The Expo was on Friday, the day before the race (which btw, I really like Saturday races) and I really wanted to meet some Instagram/We Run Social friends from last year’s race. 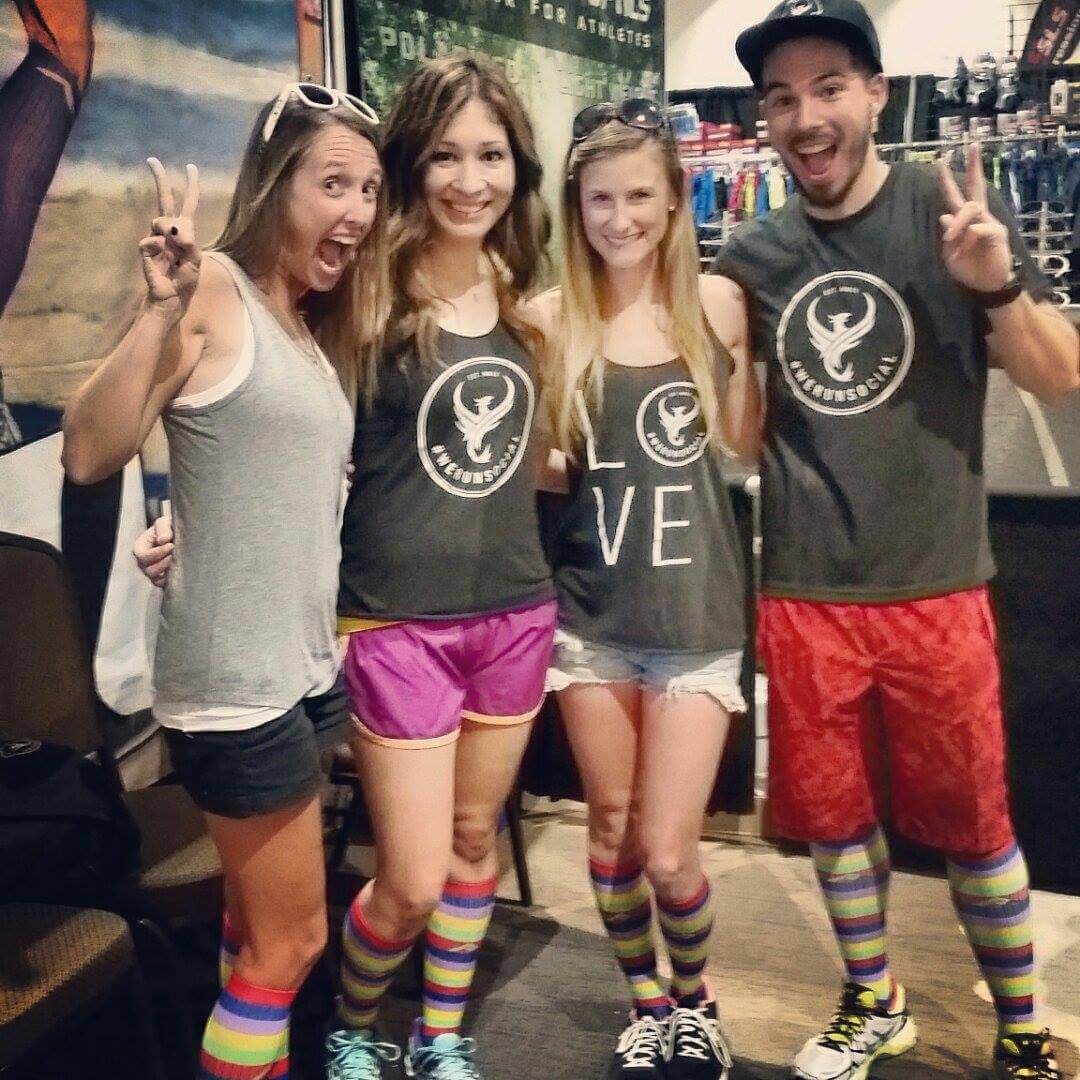 Carlee, Me, Kindal, and Brian

Both the marathon and half marathon started at 6:30 so my husband and I had to be there at the same time which was nice because we could drive together (he was running the full). Runners had to arrive suuuuper early to catch busses that would drop off runners at the start of the point to point courses, so we left at 4:30 and scooped up my BRF Runner Jenny along the way. It was pushing it because the last bus left at 5:15 and we got there right at 5. Traffic was insane and we decided to drop my husband off and he ran to where his busses were. But me and Runner Jenny had no idea where the half marathon busses were! I asked a volunteer who took out a map and pointed me towards the direction we had just come from. What?!? We went back and saw my husband and run club coach who told us, no, the half busses were the other way! Runner Jenny and I scrambled (and ran seriously about a half mile) to the right place and luckily on time.

After about a 20 minute bus ride, we reached the drop off point and I immediately got in line for the porta potties. It was a long line but I was able to do what I had to do just as the announcer called runners to the start line.

My long time buddy Nadia was with me and planned to help pace me to a PR (which was my goal, but I seriously had no idea I would do it by so much). She wanted to make sure I started conservatively, while I really had no idea what I was doing. Thank God for her because I know I would’ve started out too fast. 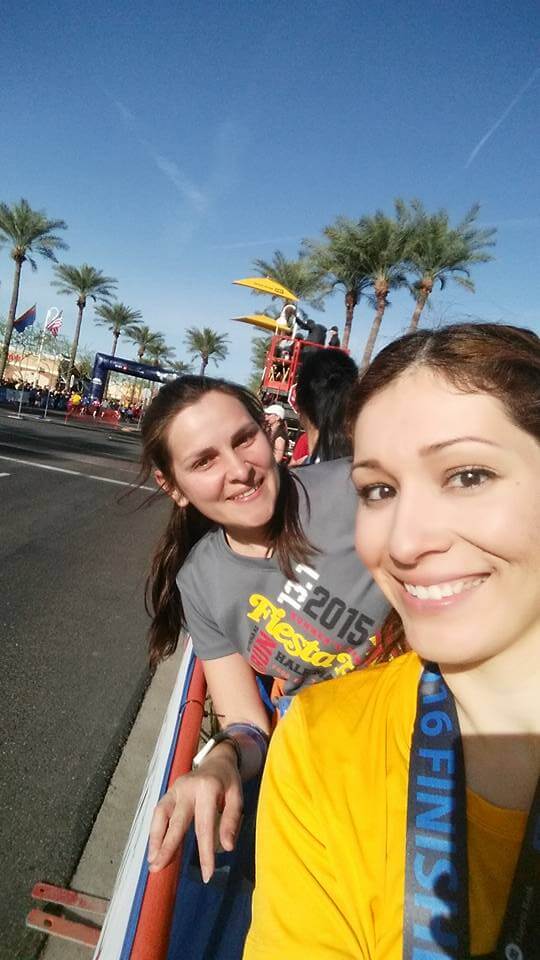 My beautiful friend, Nadia. Friends for over 20 years ❤

In my overly ambitious head, I wanted to be at 8:15, but Nadia wanted me closer to 8:30, at least at the start. We found the 1:50 pacer and decided we’d stick with him for as long as we could as he said the pace was an 8:23/mile and that was a happy medium for me and Nadia.

I began my attempt to get my I-pod ready; I had purchased a little shuffle thinking I’d avoid another FroYo music fiasco, lol. No such luck though because I had no idea how to make my playlist play. It would play the songs out of order and I didn’t know how to fix that. I started panicking a little, frustrated that I was dealing with this, but Runner Jenny was nearby and calmed me down, reminding me that before then, I never listened to music anyway. She was right. Music or no music, I’d be fine.

I never got the shuffle to play the songs in my playlist order and it ended up not being a big deal at all.

Mile 1 was navigating through crowds and it went by quickly at 8:24. We settled in and I just got in a zone, only looking at my watch when I felt it buzz a mile split. The pacer was actually going a little faster than planned as miles 2-7 were between 8:14 and 8:19. This pleased me as it was what I had wanted and I was feeling good. Really good. Sometimes I would feel myself start go a little ahead and then I would pull back, go a little ahead, and then pull back. Nadia’s presence a reminder of the plan.

And each time I felt the watch buzz and saw the mile split I would just grin. I was doing it! At mile 7, I unplugged an earphone, turned to the pacer and Nadia and said, “This is officially the longest I’ve ran at this pace!” I was doing great!

At mile 8, the pacer returned to his plan as the split buzzed at 8:21. I was a little bummed to see a 20something after feeling so good in the teens, and I told myself that if I was feeling good at mile 10, I would let myself pull away.

After mile 10, I dug my heels in and picked up the pace. I didn’t look behind me or next to me. I didn’t say a word to Nadia (who later ended up stopping to call 911 for a runner!), I just went, telling myself I had a 5k left and to leave nothing on the pavement.

Knowing I had a mile left, I was going for it. I knew the last mile was a decline and I used that and the adrenaline of having a sub 1:50 nailed to give it all I had at the finish. 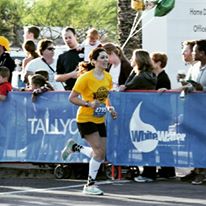 I roared my way into the finish line. I was so ridiculously happy. I couldn’t believe that in 3 weeks, I’d managed to PR in my 5k, 10k, and now my 1/2 marathon time. With the adrenaline I was feeling, I could’ve signed up for a full marathon this coming weekend! (Spoiler alert, I didn’t LOL)

I never once felt like I couldn’t do it.

Nadia’s plan to start with the pacer was perfect. I think had I tried to do it on my own, starting off right away at an 8:15 pace, I might’ve tried to go faster and lost control. I was lucky that the pacer went a little faster earlier in the race, closer to what I’d wanted, because that let me be consistent and I feel that was huge in allowing me to feel so good the entire way.

I’m also extremely freaking proud that I took the risk of pulling away after mile 10. I think the “old me” (I’m not sure what that means yet) would’ve been too scared to leave the pacer, afraid that I would burn out.

But I felt so confident in myself. I’ve never felt this way before. It’s like I just knew that I could go faster–at mile freaking 10! 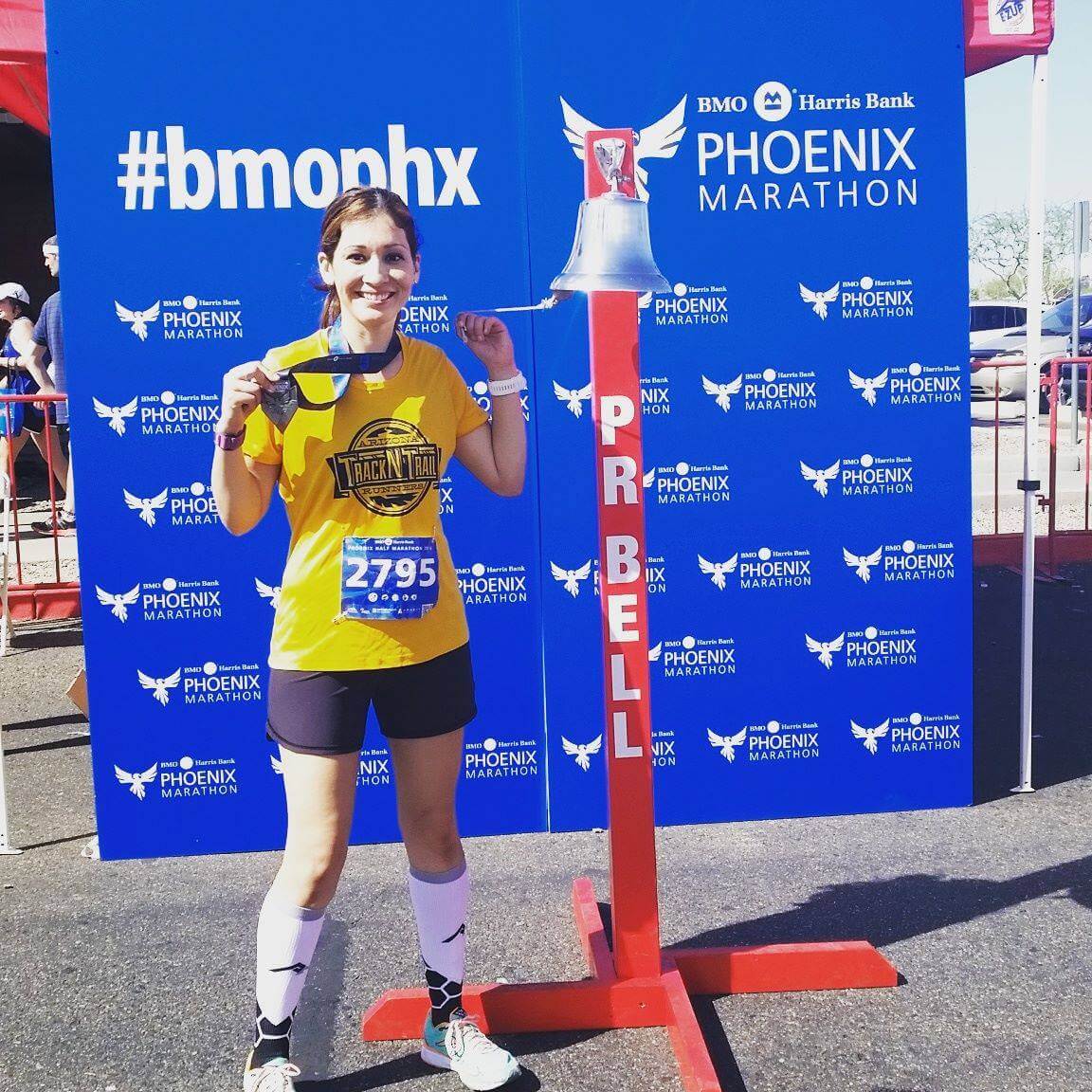 When I finished, I immediately grabbed my stuff from gear check. I had signed up to receive tracking alerts from my husband and sure enough, he had crossed the half way point already right on target.

Not long after, Runner Jenny and Nadia met up with me and we waited for my husband to finish. I got the 20 miler alert and then finally, we saw him. I screamed my head off as I saw him cross at 3:37:46!!! A PR for him too!!! 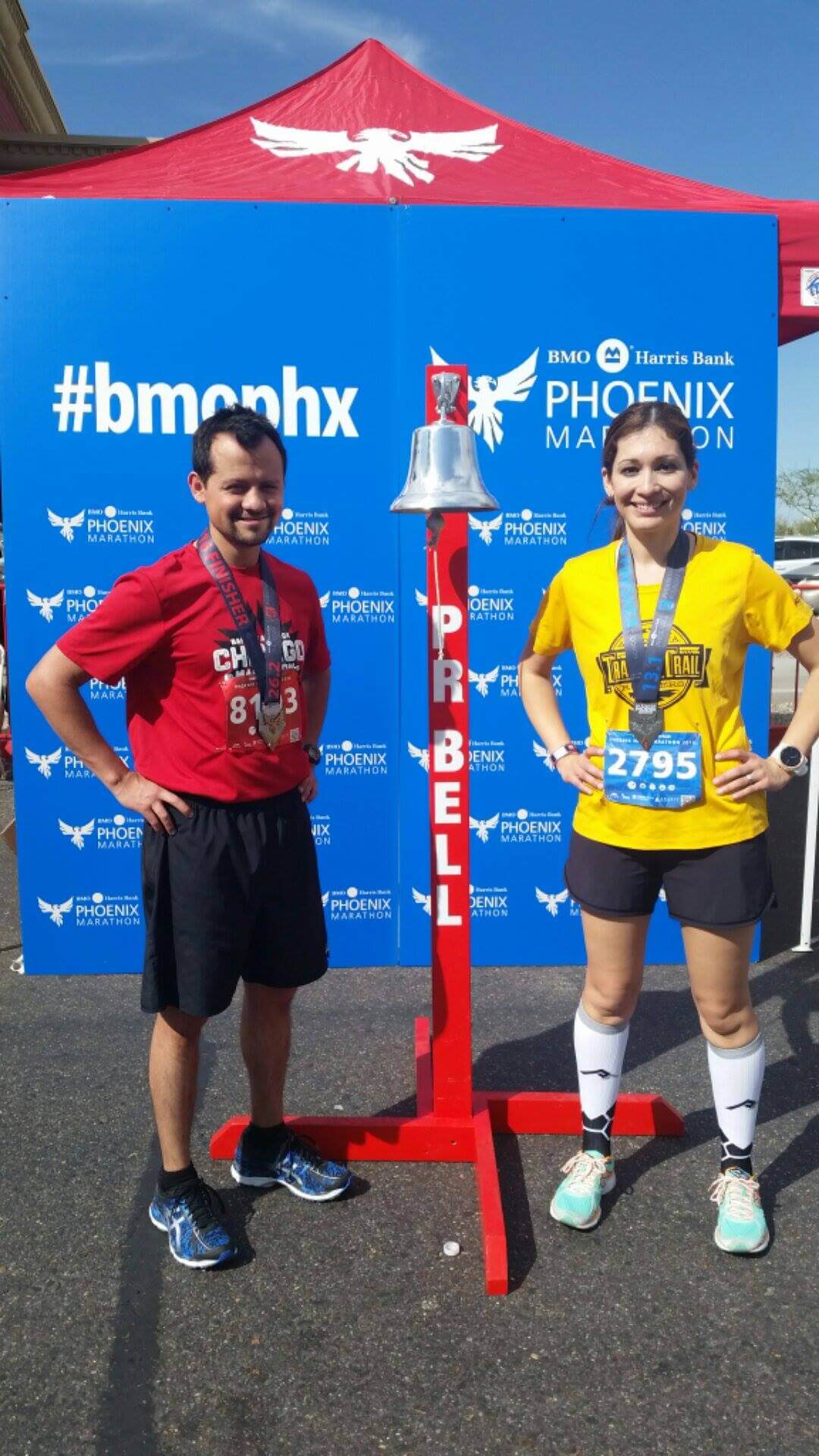 It was an absolutely fantastic day. Being surrounded by friends (my running club is amazing), having my husband with me, and finally feeling like I ran a race the way I knew I could has me the happiest girl on earth. I’ll be taking a break from racing (but not from my blog, so don’t worry 😉 ) and plan on riding this high for a long while 😀

Thank you all so much for your kind words on Instagram and Facebook and here. Thank you for following my journey. ❤

–How do you build confidence in your running?

–When’s the last time you felt you “nailed” a race?