I’m so freaking proud of this race.

It was tough and it was ugly but I finished–leaving nothing on the course. Nothing.

I knew from seeing the course elevation map that it would be hilly in the beginning, but I was really unprepared for how hilly it actually was. I knew as soon as I started that my goal of sub 2 hours would be a long reach.

I began with brf Runner Jenny and we took the first hill slowly–it was seriously right at the start. And the next one too. Except it wasn’t really all that slow for me as the first two hilly miles were 9:35 and 9:42–for me, that’s a really good pace going up.

For Runner Jenny though, that was cruising and at mile 3 I told her to go on her own. I just couldn’t keep up. I could see her every now and then turn around to see how far back I was ❤ , but I kept falling farther and farther behind. And then I couldn’t see her anymore 😦

So I decided to run my own race, only checking my watch when the mile would beep.

At mile 3 I settled in my own pace and miles 3 and 4 sounded off at 9:21 and 9:25. I had left my goal behind at the start so I didn’t have that pressure of trying to maintain a certain pace–I was just running. But I surprised myself at mile 5 with an 8:51.

It was right after this mile that as I was running along, I saw someone on the sidelines cheering people on. He had no sign or crowd and seemed to be cheering everyone, not just one particular person.

I veered to the right so I could high five him! I was surprised he wasn’t surrounded–I totally would’ve stopped to take a pic if I had had my phone.

Mile 7 sounded off at 8:54 and I was shocked again to see it be a sub 9–the downhill definitely helped. 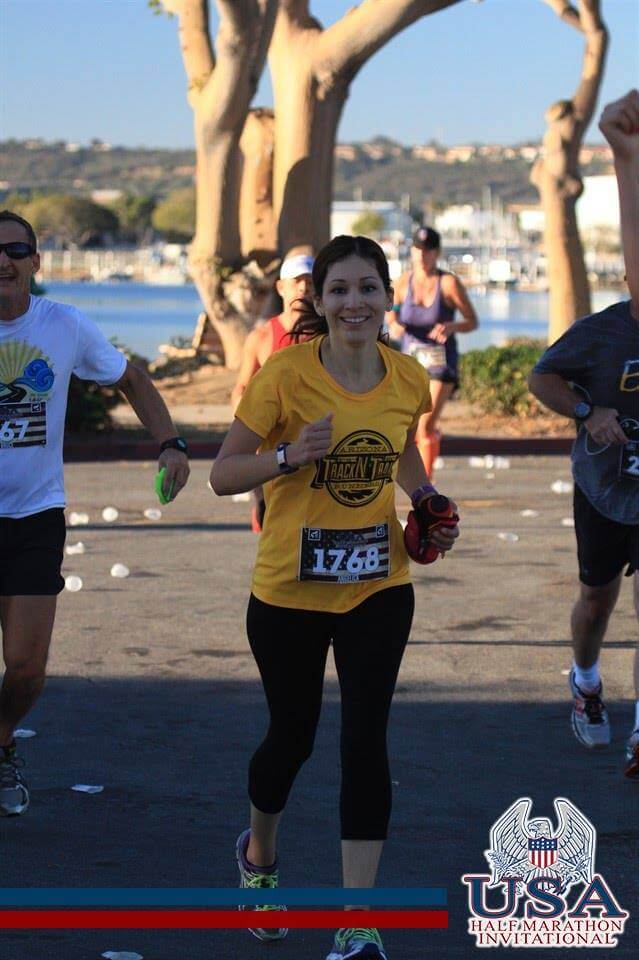 It was here that the course seemed to flatline but there were still some baby hills along the course. I cursed each and every one of them.

I managed a 9:13 mile 8 and was really happy to have it be a lowish 9. I started doing some math (I’m really not good at it) and I realized I still had a shot at a sub 2–I’d have to work though. 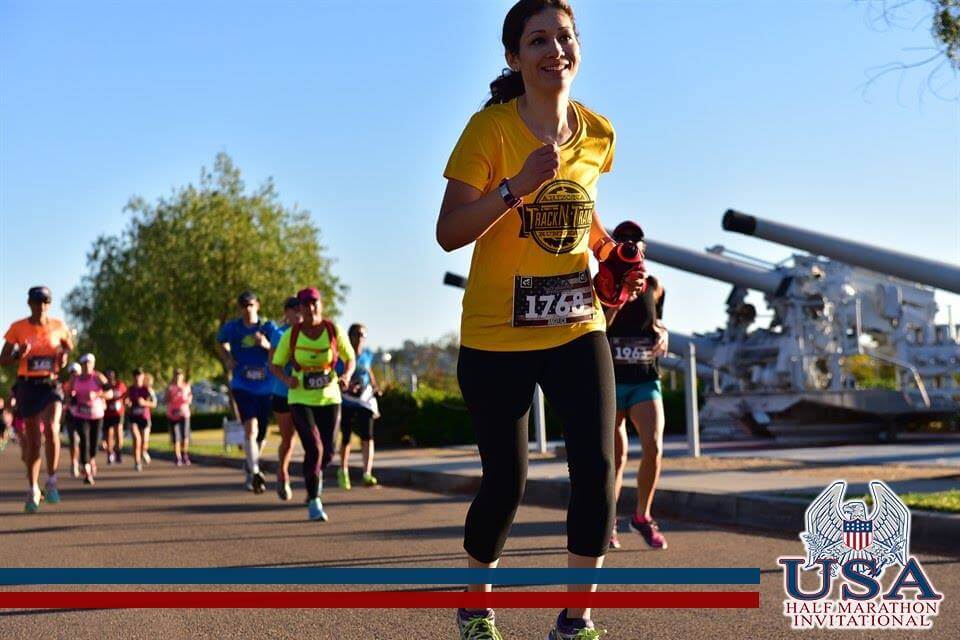 Then the cramps started. 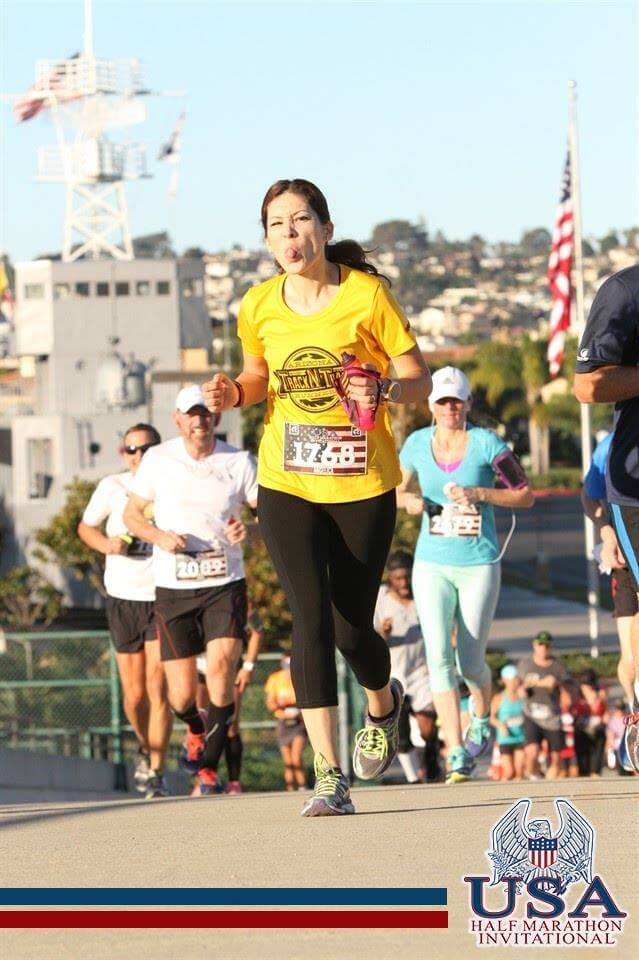 And then……. the mile from hell.

I knew I had one mile left. If I could just get through this mile, I’d get a sub 2. It would be ridiculously close, but it was possible.

Except it wasn’t. My legs cramped up into rock solid masses of crampage–it almost brought me to a complete stop. I was in so much pain, pain I hadn’t felt ever in a race. I saw the pacer roll past me and I wanted so badly to hang on. But I couldn’t. For the life of me, I could not run faster.

I turned the corner towards the finish line broken. My teammates were on the side line and I yelled for them to call for my husband. I knew it was going to be an ugly finish. I was limping, dragging my right leg (that one hurt the most). I had cramps everywhere–toe cramps, foot cramps, ankle cramps, shin cramps, calf cramps, hamstring cramps–my entire legs were cramping.

The announcer saw me approaching and said through his mic, “I don’t care if you walk, limp, crawl across the finish, just do it!!”

And that’s exactly what I did, screaming in pain and collapsing as soon as I crossed. 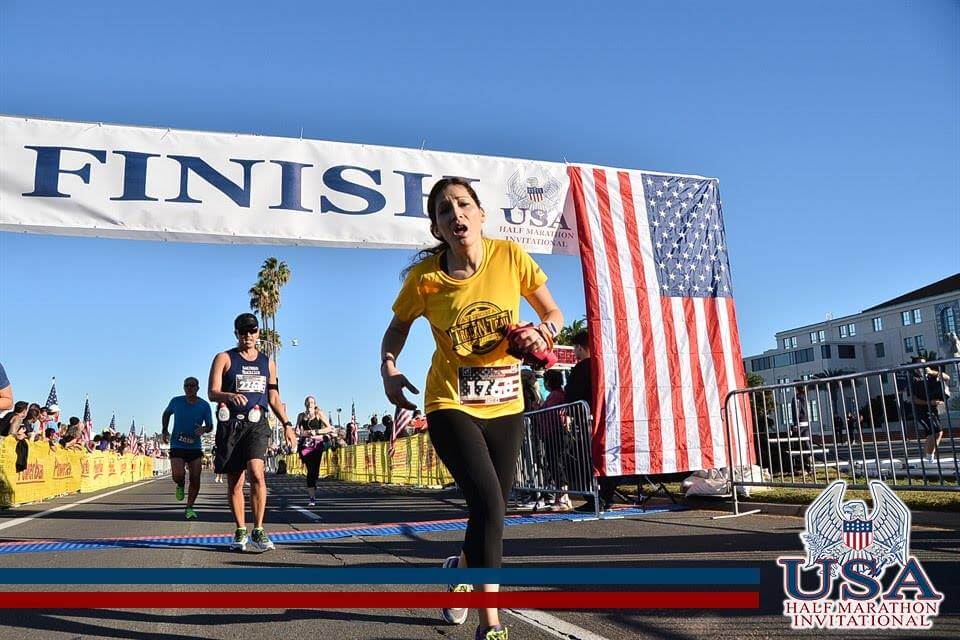 I was immediately picked up by the medics and my husband found me not too long after. I was screaming so loud; I’m sure there are people who I traumatized, but the pain was so intense–I felt like my muscles were ripping apart.

I was giving water and electrolytes and they placed ice all around my legs and it was a while before I started to feel better. Just when I thought I was in the clear, the cramps came back on both legs in full force. Screams again.

The medics asked what I had consumed throughout the race and I told them I had been carrying Tailwind (electrolytes) and had taken water at a few of the water stations as well–even my Gu at mile 7. I had no idea why this was happening; I felt like I had done everything right.

I know I need to get myself checked. I think my diet might be my issue–maybe I’m deficient in some vitamin or nutrient?? I don’t know, but it was definitely scary what happened to me and I def don’t want it to happen again.

I ended up crossing the finish line in 2:01:15 and I was so proud of myself for getting that close to two hours on a hilly course I was so unprepared for and with cramps the entire last mile (which I ended up running in 9:13 and realized I really had no chance of a sub two unless I had ran an 8 something last mile–I’m really bad at math).

Several of my teammates walked away with PRs (included Runner Jenny) and my husband snagged a new PR as well 😀 It was nice to have so much good stuff to overshadow my awful ending and once I was out of the medic tent, I was all smiles. 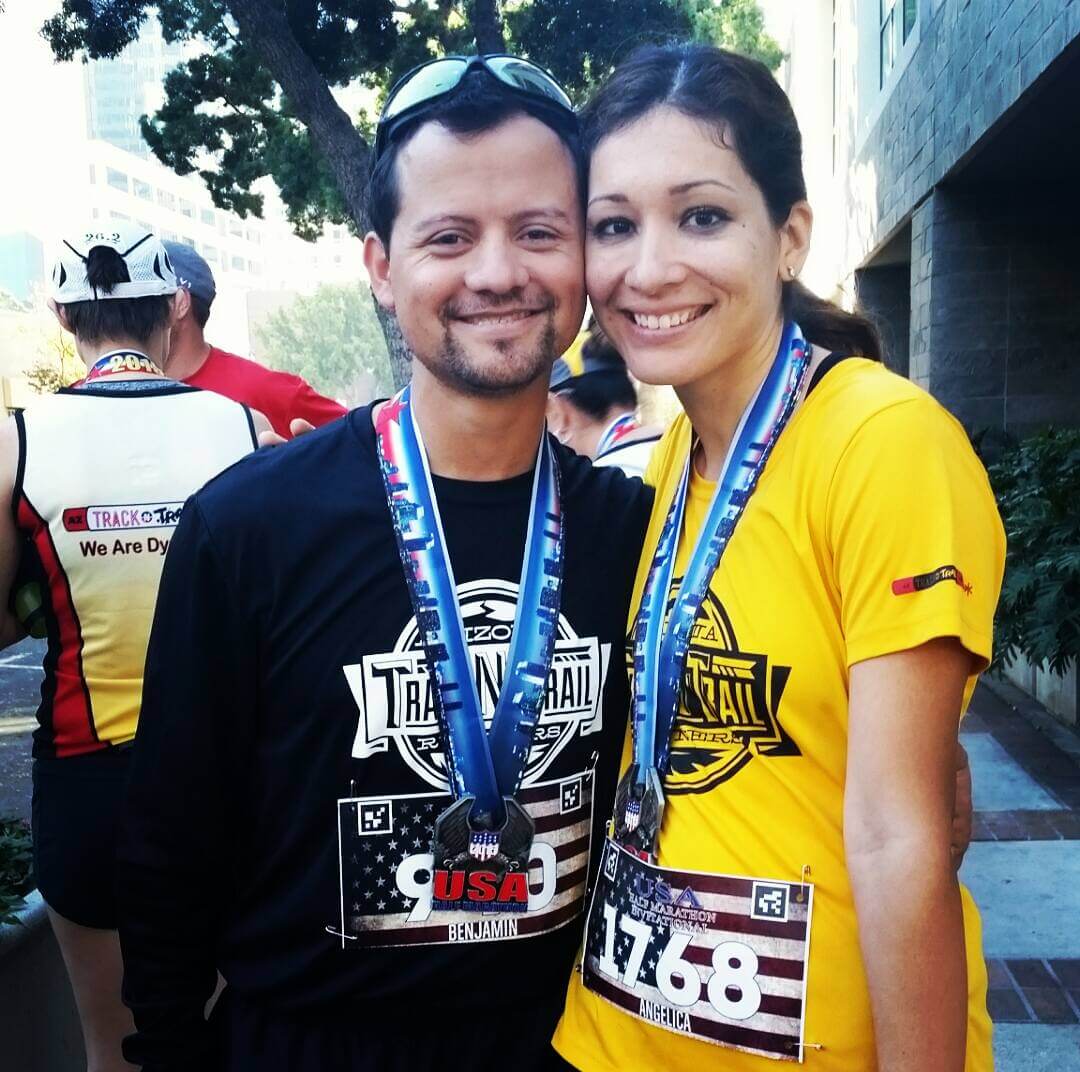 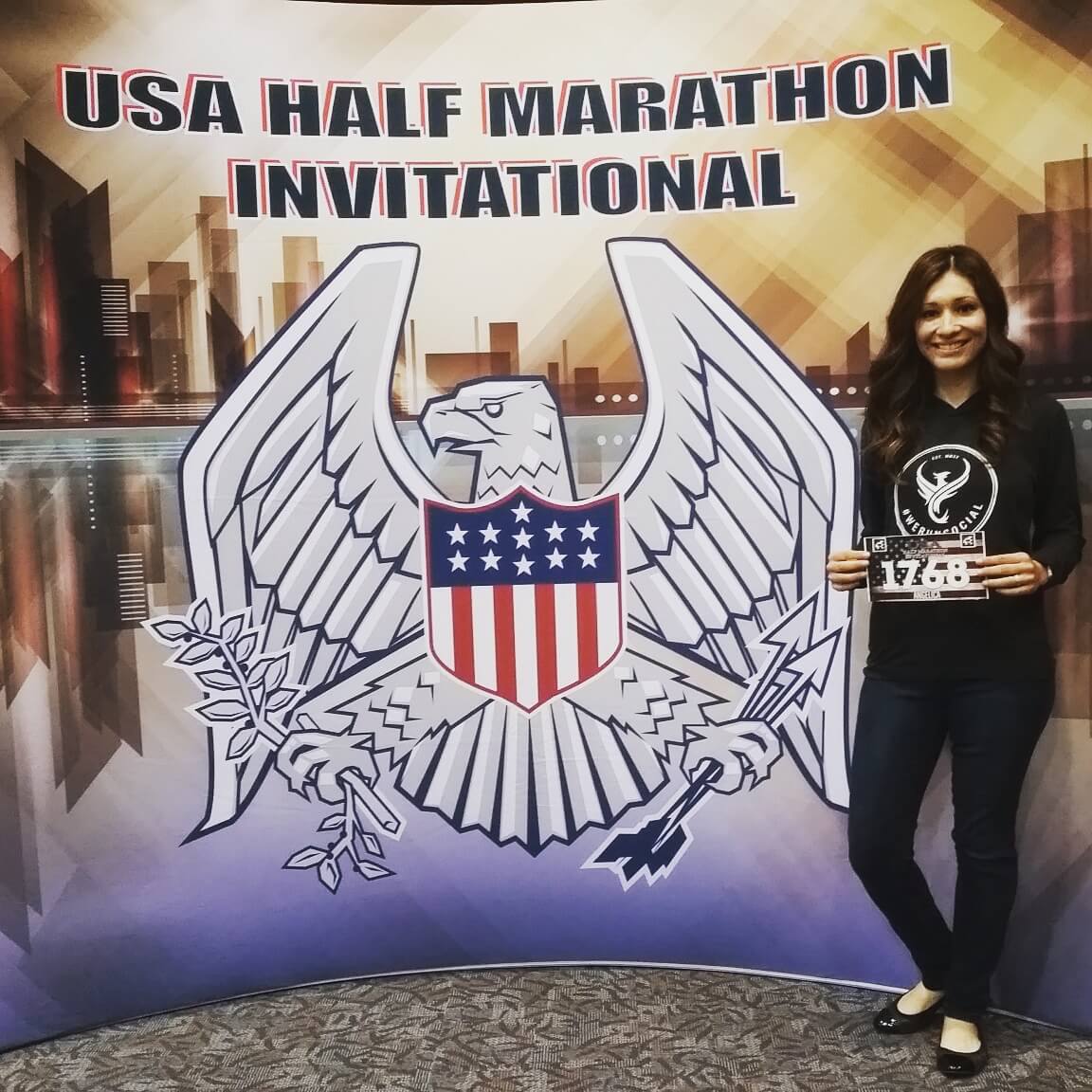 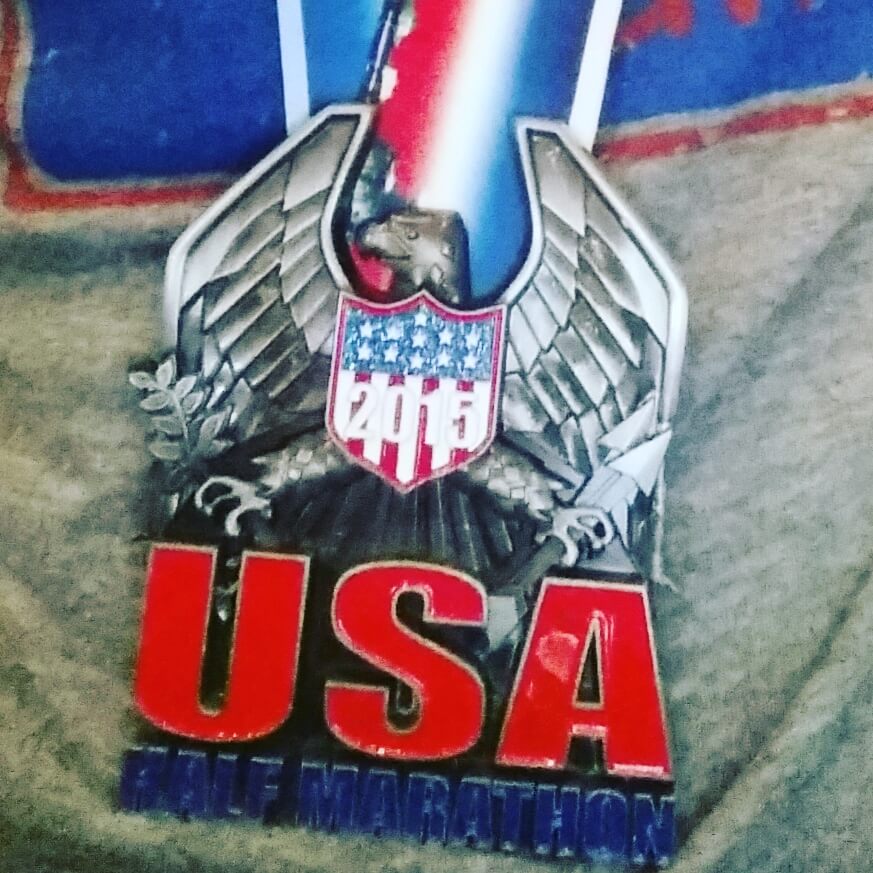 –Have you ran an inaugural race before?

–Do you like the idea of a qualifying half marathon?

–Ever high-fived an elite?