Well, that was ugly….

I had mentioned in Week 15’s Sunday long run how I was sick and that continued on to this week. That, coupled with life, it was an extremely rough week.

It was not difficult at all making sure this was done at an easy pace. I was still feeling sick–sweaty chills, stuffy/runny nose, achy body. Ugh…

This was supposed to be a strength run of 1 mile WU, 4×1.5 miles (w800R), 1 Mile CD for 9 miles total. But going in I had the absolute worst migraine ever. I rarely get them and when I do, it’s brutal. Nonetheless, I met up with my run club to get the workout done. As soon as I started running though, I could feel the pounding worsen with each step I took. It was awful. After the warm up mile, I started the first the interval and felt like I was running with a hammer hitting my head with each stride.

I just felt so sick that I just threw the workout out the window and worked on just finishing the route. 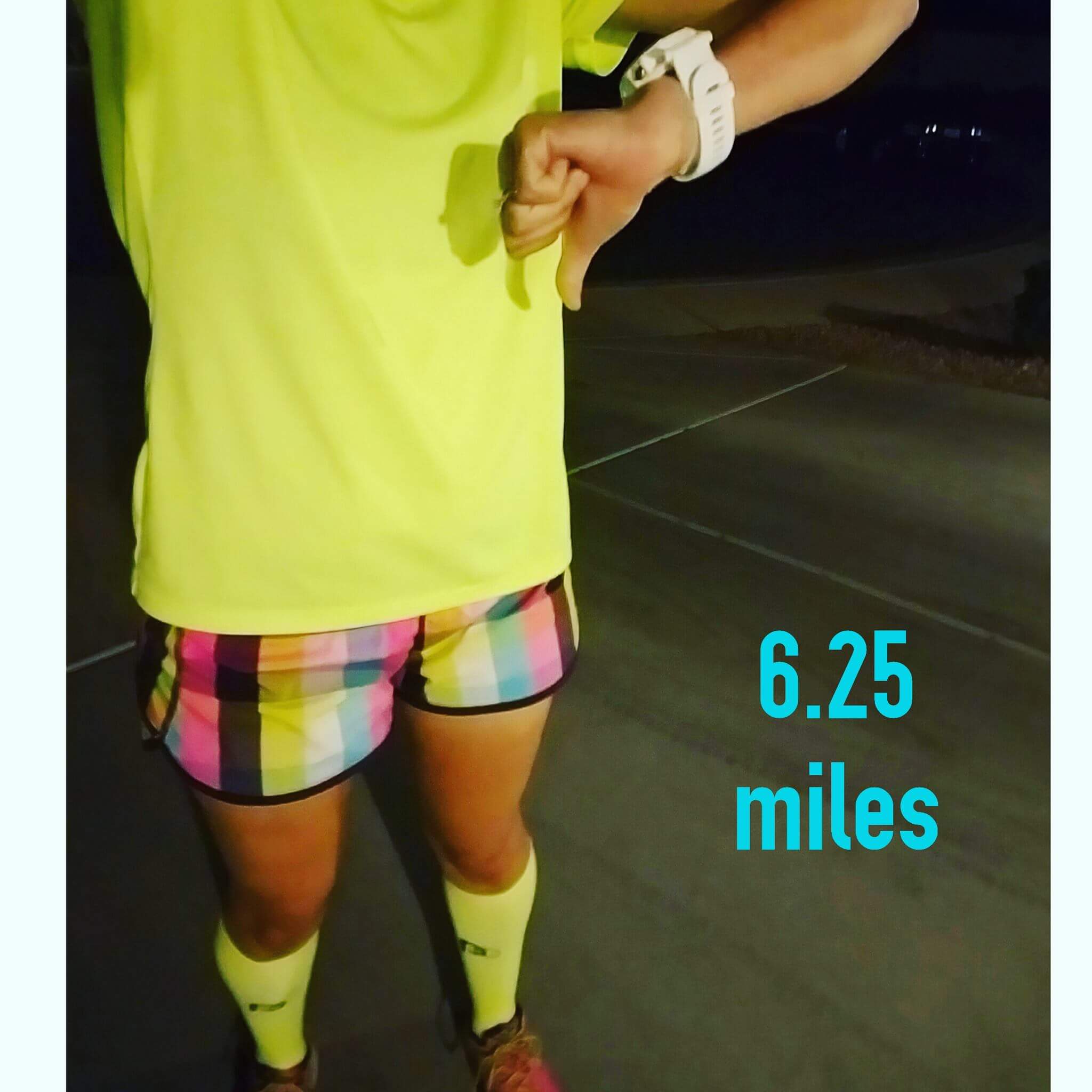 After yesterday’s awfulness and me still feeling sick, I decided I’d give myself two rest days, today and Thursday. My husband would be out of town on these days anyway which would’ve made running that much more difficult.

Early in the morning, my mom called to tell me that my aunt, her sister, had unexpectedly passed away. With my husband out of town, I wouldn’t be able to drive home til Friday.

I knew I’d be driving home early to be with my mom so I woke up at 4 a.m. to get this run done. It was bad right from the start. My tempo pace of 8:45 that had always felt comfortably easy was just H-A-R-D. I knew I was sick, I knew that I was grieving, but I still wanted to do well so I tried, I tried. And I wasn’t completely far off pace–5 to 10 seconds on some miles-but it honestly made me feel worse, like I shouldn’t be struggling so hard with 3 weeks left of training. 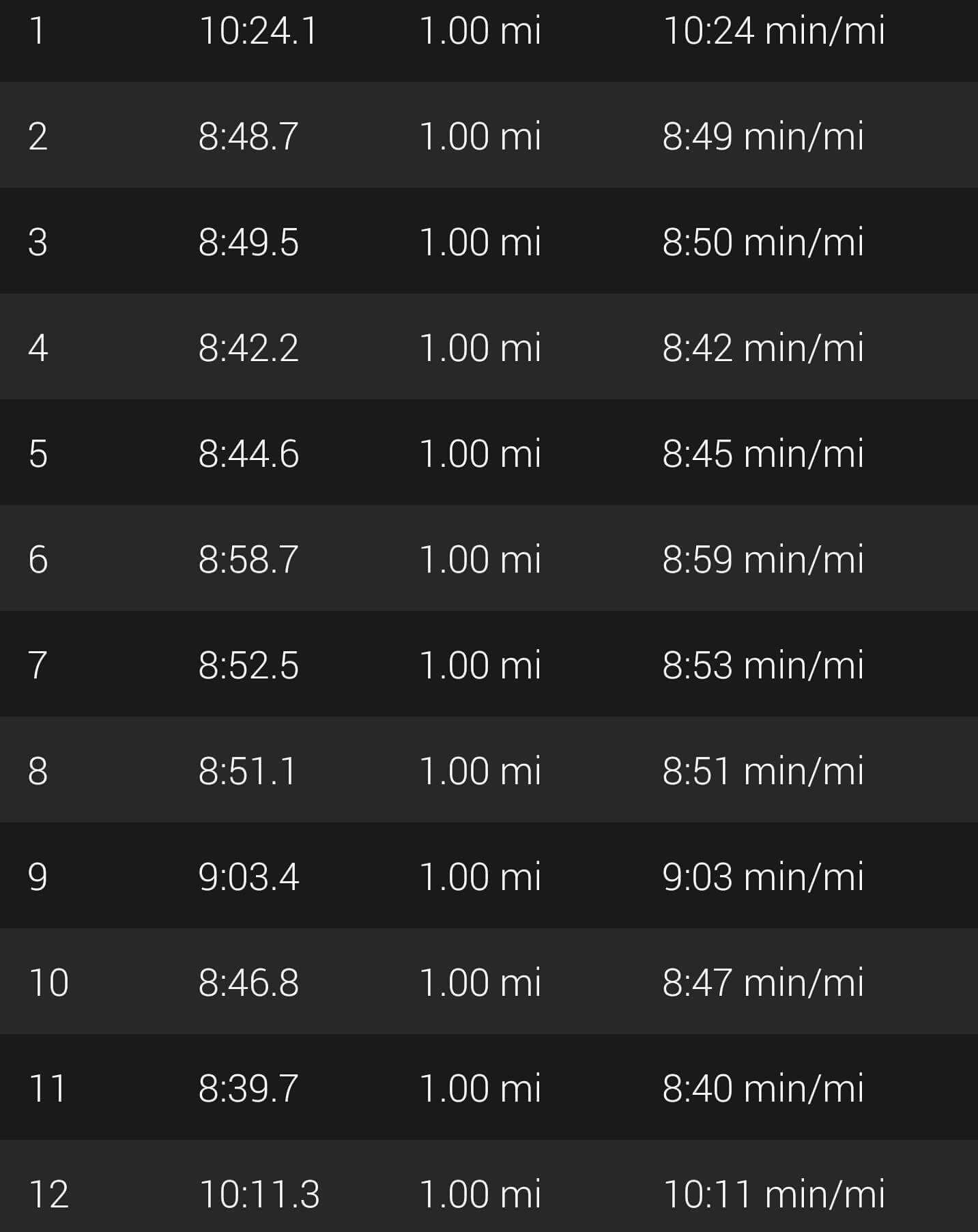 Anyway, I finished and then drove 4 hours south to help my mom with funeral arrangements. My aunt had died in Mexico and it was difficult trying to organize a transport to the U.S. plus funeral arrangements in one day; we only had Friday to work with. It was very stressful as we were on a major time crunch and by the time the day ended, I had never felt so sick and exhausted in my life.

I knew logistically it was going to be hard to squeeze a run in. The international transport was taking place early morning and the funeral immediately after. I thought maybe I could run once everything was done, but because I had been insanely busy the day before and still organizing arrangements Saturday morning, that by the time the funeral was over and my aunt was finally resting in peace, I could barely move.

And because I was crazy, I decided to drive the four hours back home instead.

It was my anniversary day and my run club had a 5k Halloween Run so naturally, we dressed up accordingly. 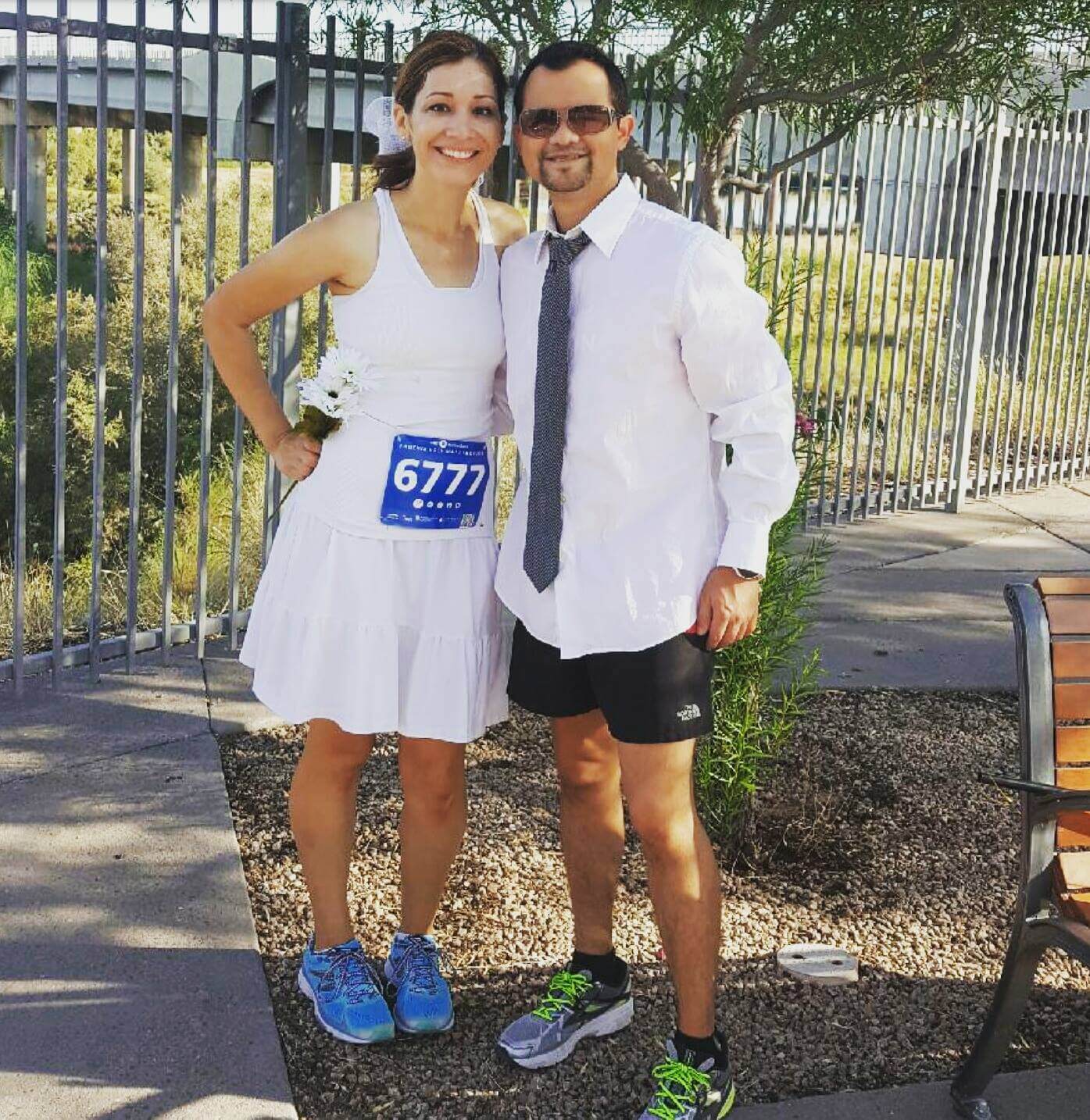 This “Runaway Bride” is never running away 😀 #6years

I have no idea how I was able to run. I had gotten into Phoenix late the night before and the run was early in the morning. But I knew I needed to get in miles so off I went… 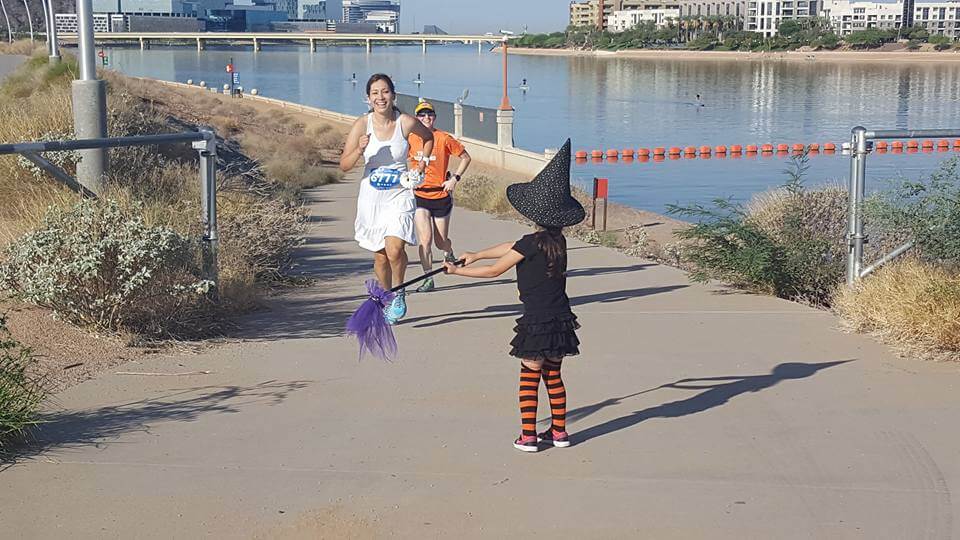 My daughter yelling at me to “Run faster mommy!!” ❤

Then, after a LONG nap, I got in some more miles in the evening. I wasn’t going to worry about pace–this was just about getting in miles. But, after a few miles I felt warmed up and things started feeling a lot better. The last three miles felt amazing and I was on cloud 9 and so ridiculously happy that I was ending a run on a good note.

Week 16 ended with 34.7 miles. Not gonna lie, for a while I felt like all my weeks of training, all the hard worked I’ve put in, was going to be lost because of this awful week. Right now, I’m just focusing on getting better and thinking positive. I know one bad/sick week isn’t going to derail everything and I just need to make sure that I don’t let negative thoughts take over.

–Have you ever gotten sick towards the end of your training cycle? Remedies?

We are less than a month away, folks!!! And the nerves are settling in…

Easy miles around my neighborhood. I feel like I’ve been trying to make these be slower but they’re not coming out as slow as I’d like. This struggle was pretty much the theme of the week. And I know I have to work harder as I want my easy runs to really be easy, especially as I get closer to Hanson’s “taper”.

I was a little late meeting up with my run club and rushed going into this run, unnecessarily, as I’d spent the afternoon Halloween decorating (priorities, right?). So my warm up was faster than I would’ve liked, there should’ve been an 800 recovery between the 6 strength miles, and my cool down should’ve slower. I was pressed for time going in and then pressed for time finishing as I had a dinner date with friends. My six miles were faster than strength pace–this whole run was just not exactly what it should’ve been, lol.

It is…BUT, my best running friend Jennifer had a run today and I wanted to squeeze in a good luck run with her before she left to tackle the Chicago Marathon (more on that a little later!).

Again, a little faster than tempo pace. I finally got it together a little after the first half…

I absolutely love this ^ quote. I feel like that’s something I’ve been working on a lot this year as far as goals and challenging myself–not compromising or settling and just going for it.

I moved my rest day to Friday since I didn’t get it mid-week. It worked nicely as we were driving out of town early morning.

We were visiting my hometown on the border and I got in some easy (too fast) miles along the fences.

I did my run on this side…

…and then had post-run tacos on this side.

This was the only run this week that was right on target pace, lol! My splits were kinda all over the place but it averaged out to be exactly what it needed to be 🙂

What I liked about our route, and this was done intentionally, is that we made sure to have long inclines throughout (to help prep for those darn NYC bridges).

It doesn’t look like much of an incline, but I could certainly feel it.

My motivator for this run was getting back so that I could track my BRF Jennifer at the Chicago Marathon. The rest of the morning was spent seeing her little runner figure move across the course (the Chicago Marathon tracking app was amazing!) and screaming out loud to myself. She was doing so well and then finished strong snagging a MASSIVE PR!!

I saw her hard work first hand leading up to her big day and saw what hard work brings. Yes, I cried. I was/am so freaking proud of her. This is a picture she shared–she’s done 3 marathons, all of them Chicago and all of them for #TeamFox. ❤

Total weekly mileage : 46.37 An overall great week. I need to get my easy runs back to being easy. I had been doing well in previous weeks, just need to get back there. I can’t believe the big day is less than a month away….

–Did you know anyone doing the Chicago Marathon??

–Do you find yourself compromising with goals you’ve set?

–Am I the only one that decorates for Halloween?

Here’s how the week went down.

The plan said 6 but I was pushed for time as I did these miles in the afternoon/evening and I was expecting visitors. It was a hot one.

I doubled down Tuesday first with my speed workout. It was 86 degrees with 66% humidity at 5 in the morning. Basically disgusting. Anyway, the goal for each 1000 was a 7:30 pace.

The first one I did on my own. Then, some of my run buddies were behind me and I invited them to join me on my workout. Only one took the bait. As soon as I told him what my target pace was, he nodded, programming it in his head, and then made sure I hit it each time. This guy was seriously amazing. It was such a confidence booster to see that I was running over a half mile at that pace and feeling like I could do a full one (which I’ll have to later, lol!). I honestly think that I psych myself out. I see a pace and just think I can’t do it. Because as soon as I had someone next to me, it was like I was totally fine going for it. I need to learn to do that BY MYSELF.

Later in the evening, I ran another 4 miles with some friends. In the rain. It was awesome. A little too fast and I need to reel it in, but it was a fun run nonetheless.

I don’t mention it, but I’m rolling and stretching each day. I’m not perfect with my MYRTLES but I get them in a few times a week and for sure on my rest days.

I did my warm up mile with my friends and since they had different workout plans, I did the rest of my miles on my own. Target pace for Tempo Run–8:45.

I’ve been venturing out for my Friday runs to get some hill work in. I want to be prepared for New York’s bridges, lol! Since it’s a hike to get to these hills, and I have to be back for my husband to get to work, I woke up at crazy o’clock to get ready for this run.

I actually woke up earlier than my alarm…ugh….zzzzz

Anyway, it was a good run. We went a little faster than normal for hills but I was fine.

I forget my husband’s also training for a marathon, lol! He took the first shift and did his long run which meant I would get the later, warmer start. It wasn’t too bad, 82 degrees, 66% humidity–and there were sprinklers.

My Moms Run This Town chapter meets at 5:30 a.m. and I did not want to be in the middle of 12 miles at 7 in the morning–I remembered yesterday’s run, lol!

So, I got up and did 4 by myself at 4:45 and then swung back to meet the group for my last 8. It’s not ideal; I don’t particularly like stopping and restarting, but I like my MRTT ladies and enjoy their running company. The target pace for Long Runs are 9:29 and I was happy I was able to stay close to it.

It was a 48.63 mile week. Another big one, another weekly mileage PR.

–How late is too late in the morning for you to run? 7 is too late for me. It gets ridiculously hot here.

–How early is too early for you to run? Clearly, I don’t mind seeing a 3 on the clock.