I’m currently on my spring break and it’s been nice to relax and have time to myself–Especially convenient as I try to recover from my marathon debacle and sickness. (I’m starting to feel better, finally!)

I’ve been doing some reading and there’s a few things that have caught my eye. Things I’m interested to hear what you think: 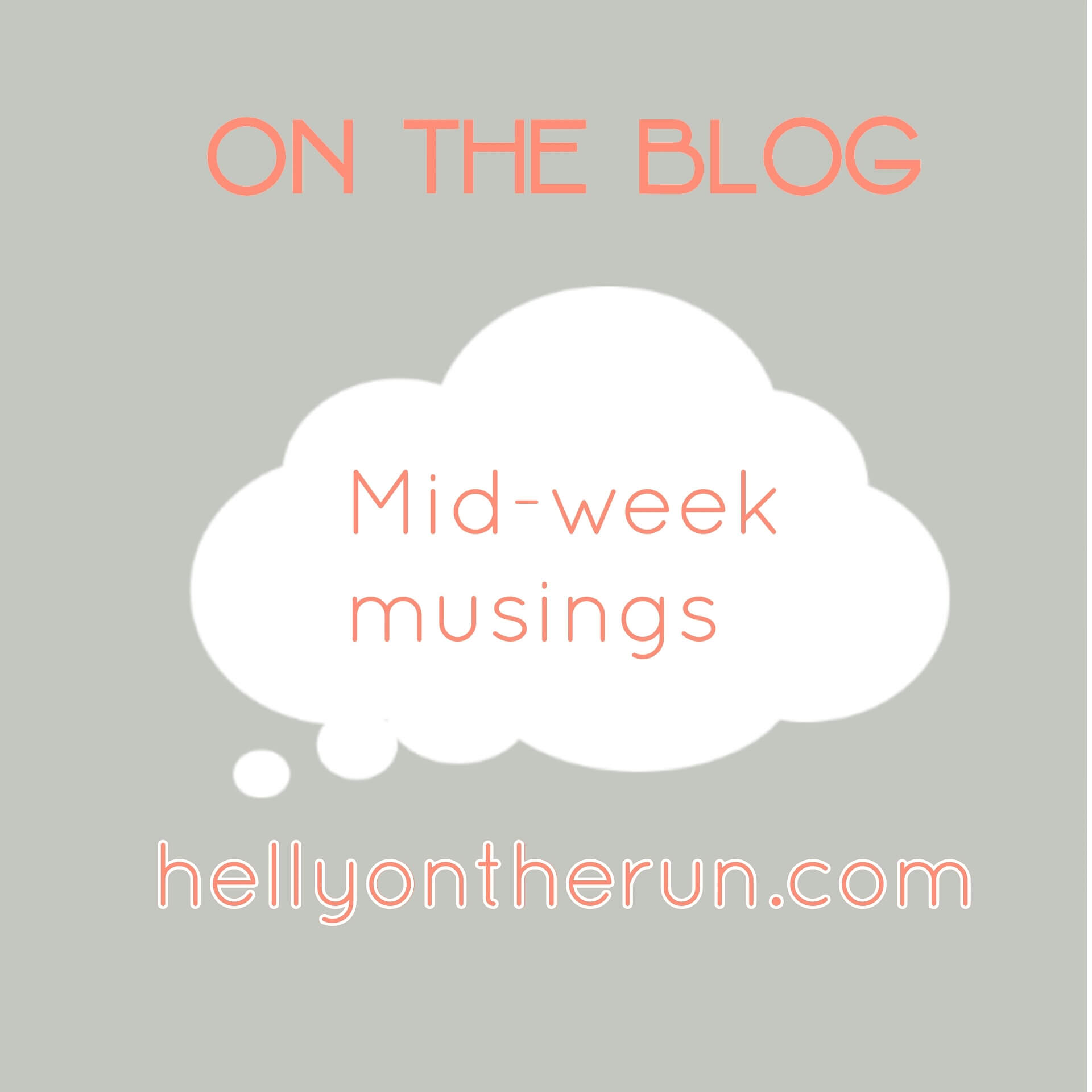 I posted this link on my Facebook about this girl who is super, duper fit and even at 8 months pregnant, you can see the outlining of abs. Yes, she’s pregnant with abs. 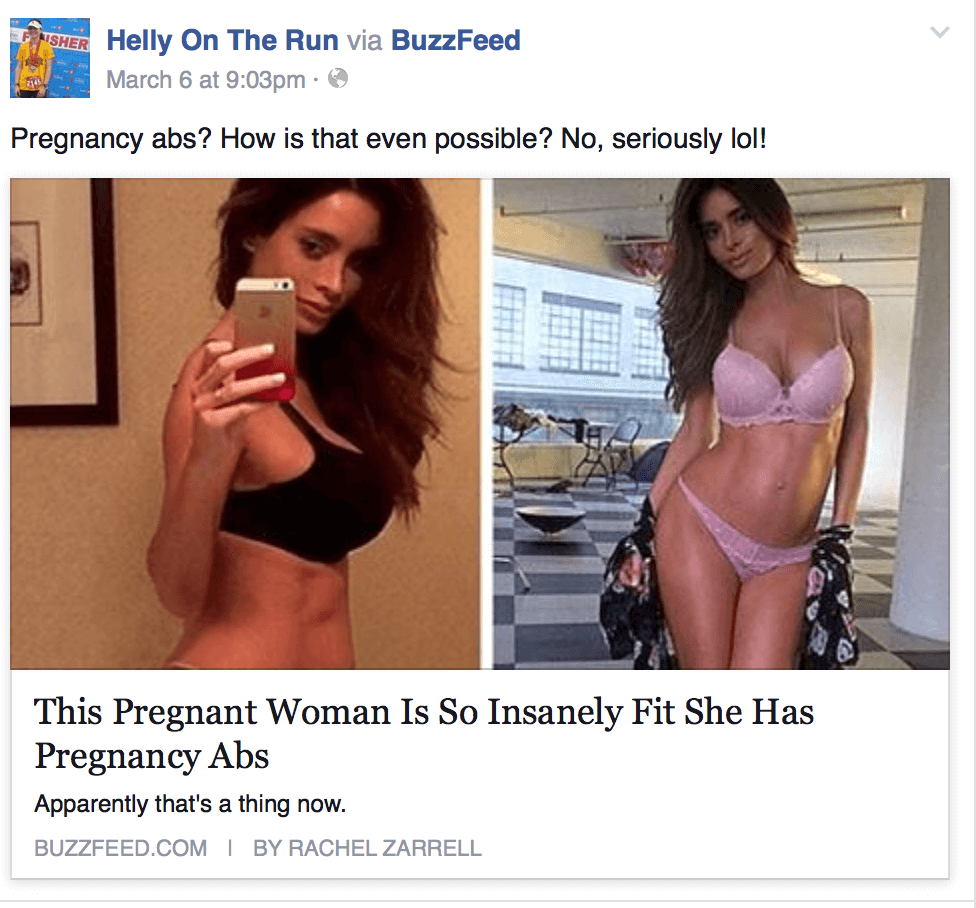 She’s a model so it’s in her job description to be fit and from other news sources I read, she continued (continues?) to work out during her pregnancy (which I did as well but alas, did not have pregnancy abs). For some reason though, this girl didn’t turn me off like Super Abs mom did. This model wasn’t throwing it in our face how it’s perfectly possible to be pregnant with abs (she posted pics of her hot bod even before pregnancy lol) or telling us how we have “no excuse” not to have abs–pregnant or not. The model claims to enjoy working out and eating clean but still occasionally chowing down a burger. For that reason alone, I give her two thumbs up!

Leave it to Arizona to come up with a 1,200 calorie creation.

So the Arizona Diamondbacks debuted a new treat that consists of a churro inside a chocolate glazed donut and topped with frozen yogurt and whipped cream. Your choice of caramel or chocolate syrup (or both).

I like churros, and I like corn dogs, but no way could I do with all of the other stuff added to it. I’d have to run, I don’t know, like a thousand miles to burn off those calories lol!

Several people responded to my Facebook link saying they’d totally eat it but share the churro dog with friends. Yeah, if you’re gonna order it, I’d say def share it!

I guess the baseball days of popcorn, sunflower seeds, and regular ‘ol hot dogs are a thing of the past?

7 Marathons in 7 Days in 7 Continents

Remember in the first edition of Mid-Week Musings I wrote about this? It’s so funny because not a month later, a woman from our run club returned to tell us she’d done it! How I didn’t know she was even attempting it was beyond me! It’s def not something I’d forget! 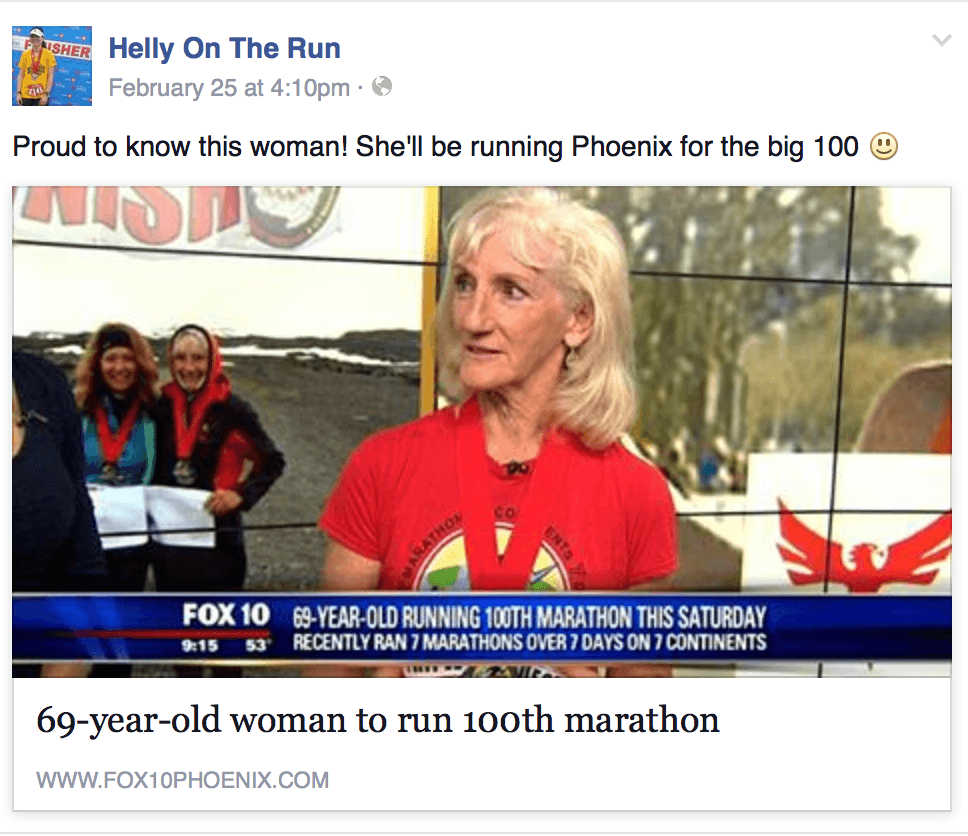 Source (PHX Marathon ended up being 101)

Anyway, Ila runs with our group every now and then (she runs more with another local run club) and she was nice enough to speak at one of our meet ups to tell us about her adventure.

She indeed ran 7 marathons in 7 days in 7 continents! She talked a lot about the things mentioned in the article I shared last time about how lack of sleep was a runner’s biggest obstacle. And she said that camping in Antarctica was definitely a memorable experience.

Could you imagine running a marathon in Antarctica?

Of course I took a pic with her. I’m not sure that what she did is something I’d ever want to do (actually, no, it’s not lol!) but I think it’s super cool she did it and think it’s very inspiring. 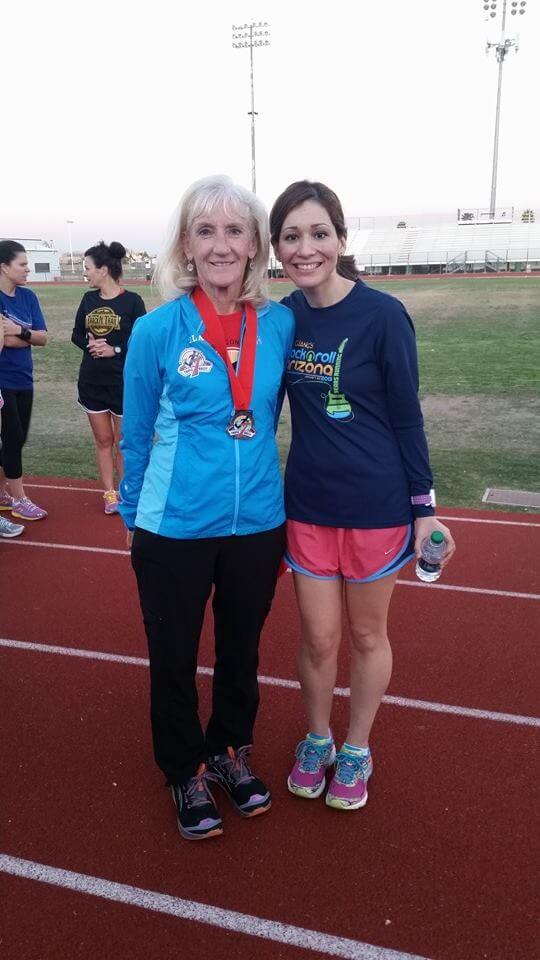 Ila and her Triple 7 Quest jacket and medal (and me 🙂 )

So, tell me what your thoughts are.

Think Pregnancy Abs are the new thing? Even possible? Is this woman a freak of nature?

Would you eat the Churro Dog? What’s the highest caloric meal you’ve eaten?

Does running a 7 marathons in 7 days in 7 continents interest you?

I was given a free race entry to the FroYo 5k but because I was still not feeling 100%, I decided to let my other half run it.

So long as I ate the yogurt.

You guys know my husband also runs. He doesn’t race very often, usually because he’s on kid duty while I’m racing, but when he does, I absolutely love cheering him on.

We arrived at the race site about an hour early as the website suggested. We had our printed ticket and waiver on hand, but saw they had a waiver station in case you forgot. I thought this was a smart organizational tidbit as I’d totally be someone who’d forget.

In fact, the entire race seemed to be very well organized.

The registration station, the swag bag pick-up, the yogurt station, everything was clearly marked and spaced appropriately so that neither was crowded. I appreciate those types of little things.

Race organizers had sent an e-mail a few days before informing us there’d been a hiccup with two items part of the swag–the drawstring bag the items would go in and the sunglasses. Both had some kind of misprinting issue. They assured runners the items would be available for pick-up a few days post race. I appreciated the e-mail and not a surprise come race day. The swag that was ready was pretty cool and my daughter is in love with the slap bracelet (we had already used the free yogurt coupon that was also inside 😀 )

Then my husband and I took a pre-race pic

and I snagged a pic with local Moms Run This Town girls (if you haven’t heard of this women’s only group, check out the website to see if there’s a chapter near you! Stateside only.) I’m a chapter leader for my city and it has been so much fun meeting moms 🙂

While we waited for it to get closer to go time, race organizers had a quick zumba/warm up session, a costume contest, pre-race stretching, and giveaway sign-ups. I thought all of this was cool and a fun way to keep people busy and not just standing around.

When it got close for the runners to start, the emcee instructed everyone to walk together to the start line which was about a half a block away (the finish line was where all the party was). As we approached the main start line, I saw that they had organized the “corrals” by what you were planning on doing: walkers, strollers, runners with strollers, runners.

I thought this was thoughtful and people were pretty good about adhering to their “station”.

Everyone lined up and I gave my husband a quick smooch and soon after, they were off!

I waited until everyone started as I was cheering on a few moms with strollers from MRTT. But then I hurried back to the finish line as I figured I had about 20 minutes til my husband would start to make his way.

The race was a good size (400 or so) but it wasn’t difficult to find a place to catch the finishers. I hoped my husband would be towards the first of the finishers and soon enough, I began to see people making their way. I saw the first place guy turn the corner. He was going and I cheered him on to first place. About 30 seconds later, the second place guy came around, and then another 30 seconds, the third. I didn’t really pay attention to him because not a few seconds after I saw the third place guy make his way, I saw my husband! He was doing so well and I began to cheer my little lungs out!

He finished the race 4th overall and with a brand spanking new PR– 21:07!

Just to be clear, my husband didn’t just roll out of bed and run lol! People ask me that all the time–does he even train? How does he run so fast and not run? He does train but just not as often as I do. He had done about 10 days of mini training for this 5k as I had thought I’d be okay to do it until my marathon failure. I tell him that if he was to really, really train, he could have some amazing times and races. I’m looking forward to giving him his turn now that I’m done with my marathon training.

My husband used to run track in high school (I ran cross country). So we’ve learned a lot from each other continuously teaching one another. He’s given me a lot of speed work knowledge and I’ve given him advice on endurance and pacing (he was a little excited at the start of this race!). It’s one of the many ways we complement each other ❤

After the race, I headed over to the yogurt tent to get my yogurt. The race was generous with its toppings (you can choose however many you wanted) but I still went with strawberry and only gummies.

My husband snapped a pic of me mid bite and then we were on our way. FroYo 5k DONE!

–Have you ran a food related race before? (The Hot Chocolate race series is also a good one!)

–What food would you want to have waiting for you at the end?

I received a free entry to the FroYo 5k. All opinions expressed in the blog post are honest and my own.

It’s Friday and I’ve been digging the DC Trifecta’s topics so I’m linking up with them again for this week’s Five Favorites. Thank you Mar, Cynthia, and Courtney for hosting! 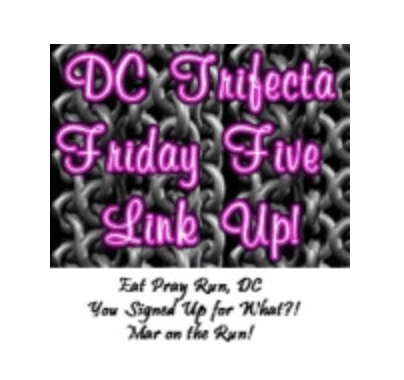 My 5 Favorites 🙂 Favorite thing about my job I’m a high school English teacher and while it’s tough something to work with squirrely, hormonal teenagers, they can actually be really fun sometimes. During out poetry unit, I get to read the likes of Frost, Wordsworth, and Shakespeare. I mean, it doesn’t get any better than that! Except it does! I have a my students create a sonnet, after reading Shakespeare’s “Shall I Compare Thee to a Summer’s Day?”, on the topic of love. Their sonnet is on something they love. One of my students decided to devote 14 lines to Taco Bell. Yes, you read that right. And it was actually pretty good! Shall I tell you of the great Taco Bell? So my favorite thing about my job is seeing students create. Most of them hate poetry, but then they start writing and see that they’re actually pretty good. And that it’s fun! It’s the best. Favorite thing about where I live OMG, I love it here. 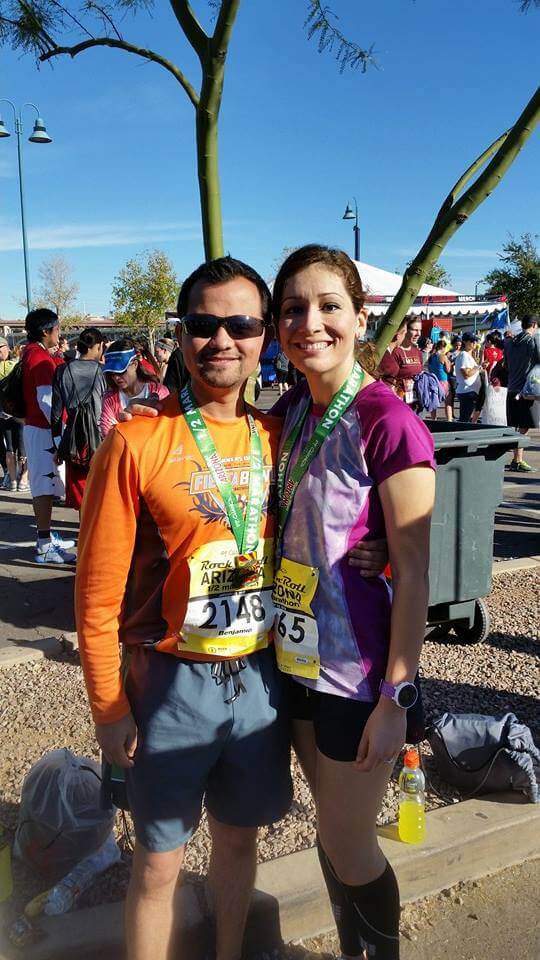 Favorite thing about being a mom Gahh!!! There’s so many things but it’s seeing my kids grow right before my eyes. Seeing that light bulb go off. Seeing them explore, absorb, learn. My daughter has been in a colors phase and recently drew her first rainbow

I couldn’t believe its beauty. She told me what each color was and then said, “My rainbow!!” and then, “For you mommy!” MELT. My son has recently discovered a love of reading and is constantly asking me to “Book! Book!” (which means read, of course 🙂 ) I love it.

Favorite thing about running YOU No, seriously. When I first started writing and keeping this blog, I wasn’t sure how long I’d last. But then I started “meeting” people and it’s really become a place for me to “hang out” with my friends. You all have been through a lot with me and have comforted me at my lows and celebrated with me in my highs. I’ve always loved running but it’s the running community that really makes this sport special. What are some of your favorite things? About your job? Where you live? Running? Family?