Let me tell you something, that. was. brutal.

I’ll start at the beginning.

We didn’t do much on Saturday so I wasn’t exhausted by the day thankfully. I was planning on leaving my house early as I didn’t get my bib the two days prior so I was out the door by 5 p.m. Bib pick-up started at 6 and the race location was almost an hour away–yes, an hour!! Game time was 7:30 so I wanted to make sure I got there with plenty of time.

I drove the 45+ minutes to get to the middle of nowhere aka: McDowell Mountain Park. I had never been there before so I had no clue what to expect. I also hadn’t looked at the course map or elevation chart before (<–um yeah, that would’ve been smart). 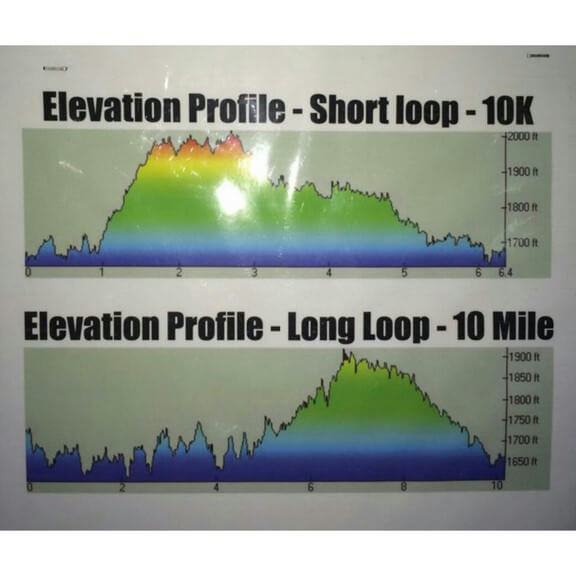 After glancing at the elevation chart(wha??!!), I picked up my bib and shirt (love!) and then headed over to my running group’s tent. There were about 40 of us that had signed up for the 10k and 27k. (Btw, there’s been much talk amongst my blogging friends on how cool running groups are. Mine is pretty amazing and will write soon on how I found them.) As we all chatted, we said how nice it was that it had gotten below 100 degrees. It actually felt pretty good out lol! Go time was right before sunset: 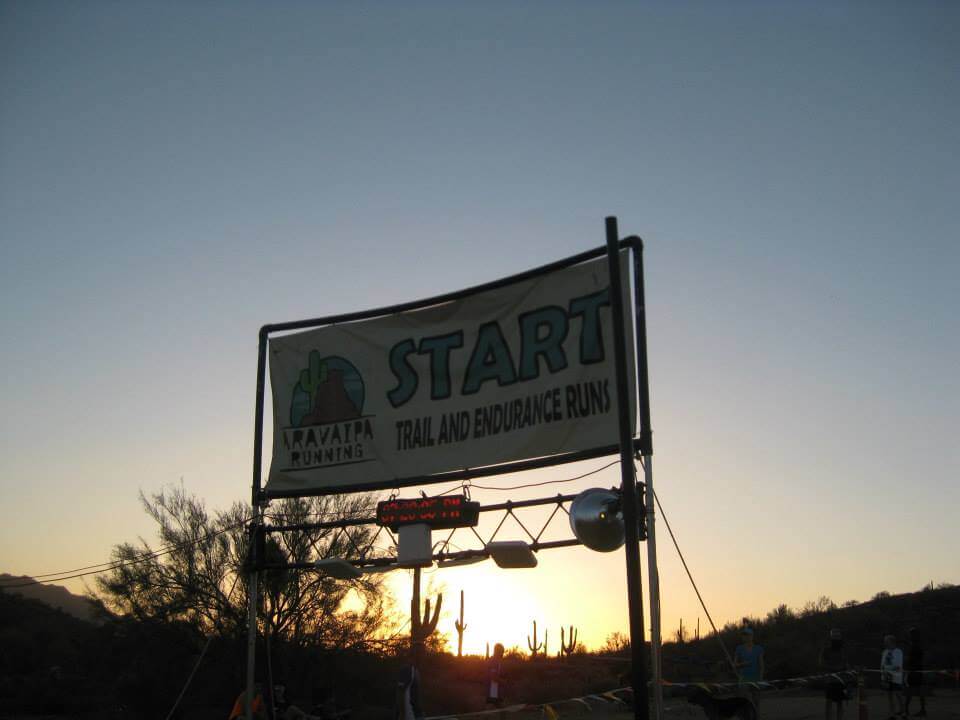 I started the race having absolutely no idea what to expect. I had never done a trail race and I had never raced at night. I figured I’d just go and see how it went.

I began with three teammates who are pretty fast. I knew I wasn’t going to stay with them long at all but it was nice to be around familiar faces at the start. After the first mile beeped though, I knew I was going too fast: 9:48. With my personal experience trail running, my easy comfort zone is way slower than that so I immediately slowed down.

I was looking around taking the scenery in. It was pretty cool to be out there in the desert watching the sun set and hearing nature. I think I got caught up with all of it because what I was hoping wouldn’t happen happened a lot earlier than expected. I flew into the air and almost fell flat on my face! I had tripped over a rock, hard, but was able to catch my balance mid air to escape disaster. Then, not just a few minutes later, I slipped and tweaked my ankle! Luckily, it wasn’t anything serious–but this was barely mile 2!! 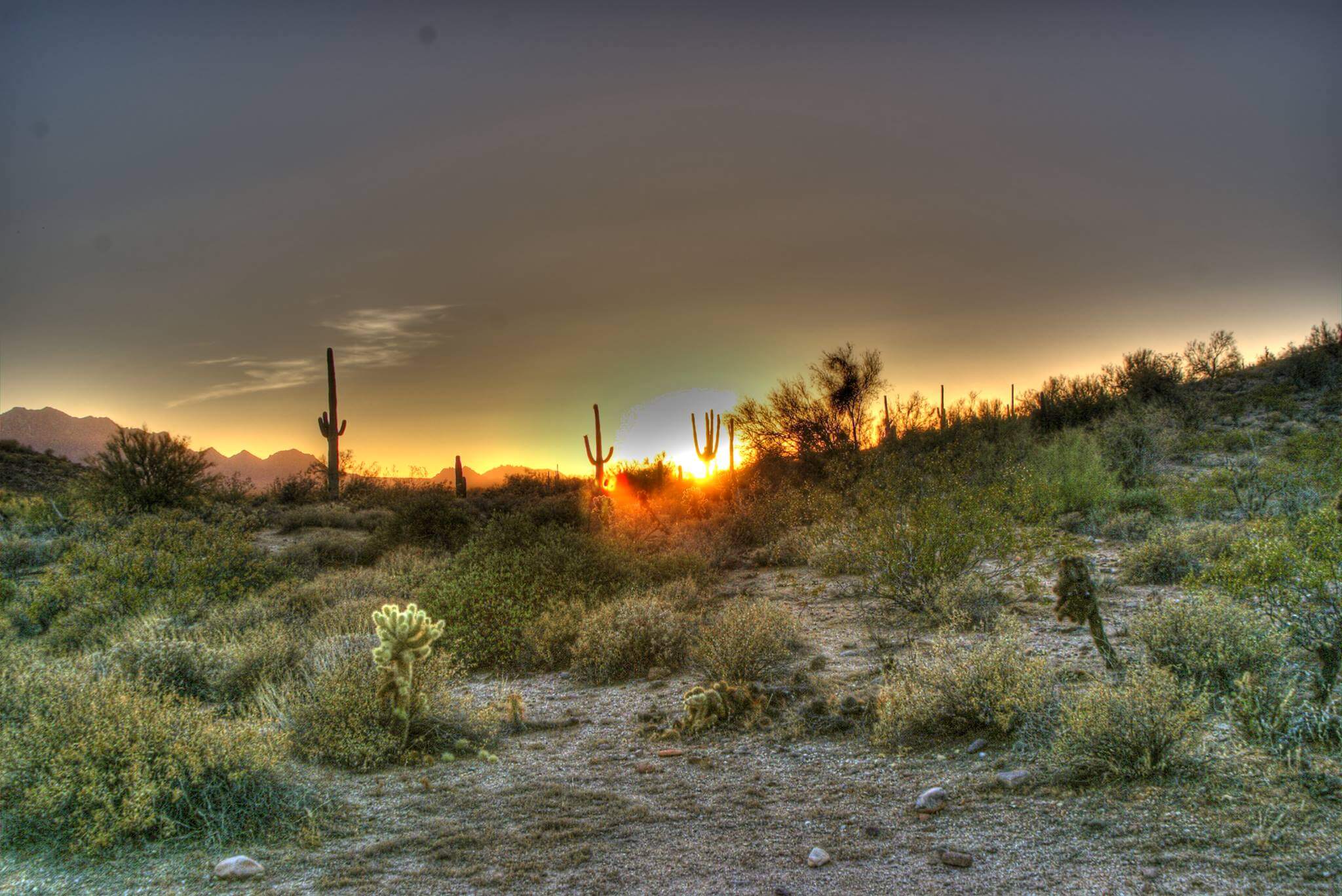 Wouldn’t this distract you too??
Photo Cred: B. S (AZTNT)

I told myself to get it together; I still had 14 miles to go.

I slowed down considerably and was battling the up, down, up, down portion of the course. It finally settled into just up and I took my time as I climbed the hills.

A little after mile 5 was the first water station. I had heard from my running group that the stations were well stocked–as in, they had an assortment of candy, chips, watermelon, soda, water, gatorade. It was pretty cool! One of the volunteers even refilled my hydration pack for me!

I gobbled a watermelon slice, took a salt tablet, and got going.

Finally, I was at the downhill part of the first loop and it was nice because the trail was finally clear. No more jumping rocks 🙂 I settled in and cruised the next couple of miles. By this time, it was dark and my head lamp was on. It did a good job of lighting the path and it also helped that I had other runners around me. Like the guy in front running barefoot.

My watch beeped mile 8 and I was so glad to know that I was halfway done. I absolutely love trail running but it’s definitely a different type of running. A lot more concentration is involved–i.e. not tripping, twisting your ankle, getting lost–which i don’t mind but I learned that’s doubled when you’re trail running at night. I was already so exhausted!

We had to turn off the trail to start the second loop and this was SO confusing. I, along with several others, had missed it and had to turn back. We had to get on a trail that took us to the start line where we would get on a the 10k trail. It meant that for about a mile, those in front were running back and those still going were on the same trail. Not cool and this would be the only black spot I’d have on the race.

Plus, having to pass the start/finish line made me want to stop. Knowing I still had 6 miles left was tough. But, it was nice to hear the cheers from everyone.

The 10k loop was absolutely awful. From the very beginning you were climbing a mountain. The trail had gotten rocky again; I didn’t mind walking but I did wish I knew how long I had to the top– it seemed never ending. I started Lebronning (cramping) around mile 11 and I never fully recovered. My legs were so tight and I was fighting some serious pain.

It was around this time too that the crowd had really dissipated. I was alone for a long time with the exception of one girl who I’d pass and who’d catch up–we went like this for a while until I passed her and didn’t see her again.

It was very dark out. The moon provided some light but out there in the mountains it was difficult to navigate. Several times I had to stop and look around to make sure I was on the right path. I’d taken an extra hand flashlight (thank goodness) and that helped provide me with extra light to figure out where I was going.

Everything was hurting. My legs continued to cramp off and on and my feet hurt so bad. I was concentrating so hard on the trail but even then I found myself sailing forward again! I was able to catch myself for the second time and avoid any battle wounds.

I did a lot of jog and then walk, jog and then walk until I saw mile 15 and then I just told myself to try my hardest to keep running. Not seeing the end anywhere near was tough but when I was at halfway through the mile I finally heard life. I was close! I picked up it up (ja!! I was limping at this point) and tried to finish strong. With whatever strength I had, I lifted my arms up in celebration as I crossed the finish line 3 hours and 19 minutes later–I was finally done! This was a great race put on my awesome people. If you’re ever in Arizona, definitely check out Aravaipa Running. I had so much fun although I do think I was ambitious in attempting the 27k as my first trail race (at night). Two days later, I’m still really sore and with marathon training 10 days away, it was poor planning on my part.

But all in all, it was a great experience and something I can cross off my list–and I love doing that 🙂

–Have you tripped during a race?

–What race exhausted you the most?