And it feels so good to be able to type that.

People have been asking me how I feel and I’ve been saying Fine, Good, Happy (that I finished) but if I’m to be completely honest, and I’m always honest here, I’m angry.

I’m angry that my body just didn’t want to cooperate. My mind and my heart were there, willing to fight, but my legs weren’t.

I stuck to my plan of starting with the 4:25 pace group (about a 10:05/mile) thinking this would be the smartest way to go. My ultimate goal was a sub 4:30 and I wasn’t going to get risky by trying to attempt anything faster than that. My long runs had all been around the 4:25 pace and I felt this was “safest”.

It’s impossible to get comfortable the first mile or so in a race so big and that’s understandable. My watch had gone wonky after passing the first tunnel and mile two told me I’d run a 7 something mile (ja!) way before I reached mile two. I saw that my watch would not be a good go-to for assessing mile splits and there was no way I would be attempting any math. I ended up just turning it off (and then turning it back on at mile 6 figuring I could do math now that I would have an even 20 miles to count from). In retrospect, I should’ve left it on from the beginning to at least have the running time. You live and you learn.

At mile 4 though, my legs began tightening and by mile 8 that turned into full on cramping. I begin cursing and told myself there was no way I was walking now, so early.

At mile 14 I watched the 4:25 pace group go and I was so angry because I should’ve been there with them, running.

But the cramps had become debilitating and they were everywhere. My quads, my hamstrings, my calves, my shins, the bottoms of my feet, my toes. I’m not kidding when I say my entire legs were cramping. 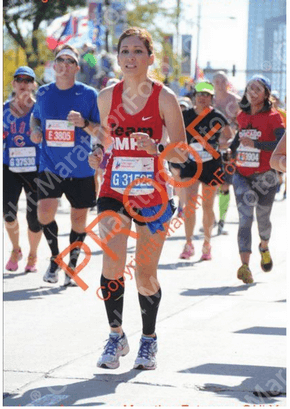 I had done everything just as I’d trained. Fueled every 5 miles, salt tabs at miles 4, 11, and 17, water at every station.

I walked for a bit at mile 14 and told myself to shake it out and keep going. I would only walk when the cramps were unbearable.

From then on, it was me running from cramp to cramp. When they became excruciating, when I could feel the balls of crampage against my skin (they left me bruises), I would walk–not for too long, and then keep going.

Not a single tear was shed.

Because it wasn’t sadness that I was feeling. It was anger. I was angry I wasn’t running the race I trained for. I was angry I couldn’t race how I’d like for all those who were cheering me on. I was angry that I wanted to so badly run and my legs wouldn’t let me.

It was this anger that kept me going. It was this anger that kept this race from being a total disaster–because even though I didn’t get the time I wanted, it could’ve been much, much worse. I’m not reflecting on this race as a loss or a let down; in fact, this was a race where I proved my mental strength has grown. I finished in 4:45:08, less than a minute from my marathon PR.

Any other time, I think, I would’ve cried, pulled over to the side, walked a lot more, maybe even given up because of how awful I felt and how upset I was at was happening to me.

But the whole time I kept thinking how this race wasn’t about me, it was about my buddy Graisyn who I Run 4, whose family stay at a Ronald McDonald House when he goes to hospitals. This race was about the people who donated, who helped me get to Chicago in the first place–that without them, I wouldn’t have been able to even get to the start line. This race was about my husband, who was running his very first marathon.

This race wasn’t about me at all.

And the anger I felt inside wasn’t going to let those people down.

So I kept going.

It hurt. A lot. My legs were battling me, testing all my strength. I saw the 4:30 pace group pass me around mile 18. I didn’t cry. 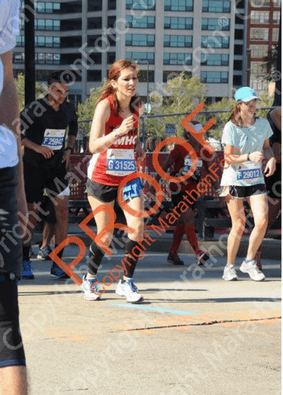 Mile 20 came and I ran through Pilsen, Chicago’s Latin community, and they all helped me push through the next two miles. I felt a deep sense of comfort being around people like me, whose language I understood, whose cheers I felt were so heartfelt–“Animo!” My legs were trying to stop me from enjoying this neighborhood, but I didn’t let them.

The last 4 miles were awful. I passed through Chinatown and soon after saw mile 24. Two miles left. I knew my husband would be waiting for me and that kept me going. Mile 25 seemed like eternity. I wanted to run the entire last mile, but couldn’t. My legs won that time. I turned a corner and saw a sign that said, 400m left! There was no way I would walk across the finish line. No way.

Limping, dragging my legs (by this point they were shaking), I hobbled across. 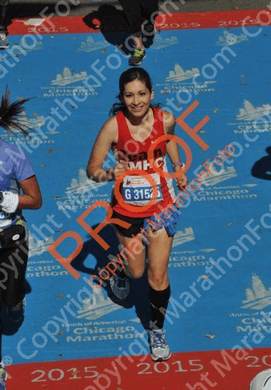 Thank you all SO much for your support throughout this entire training. Wow. I’m completely overwhelmed by your love–it’s part of what keeps me going. And I’m going to keep on going 😀 I’ll be sharing more Chicago marathon memories with you in the next couple of days; I just really wanted to get my race thoughts down first.

–How ’bout them race photos, eh? Ever had the camera catch you in pain?