It’s not that I underestimated R2R2R, but I’m just not entirely sure you can ever be fully prepared for something like that.

We left Saturday morning by bus to the Grand Canyon. I was doing this with my running group (many readers asked if I had gone with a group) and it was so much fun experiencing it with people you’ve been training with for months. There were a lot of veterans, with our two leaders having done it 10 times, and quite a few of us rookies. I think 12? There were 56 total.

We arrived at a touristy spot of the Canyon where we took some photo ops. Here’s one of mine: 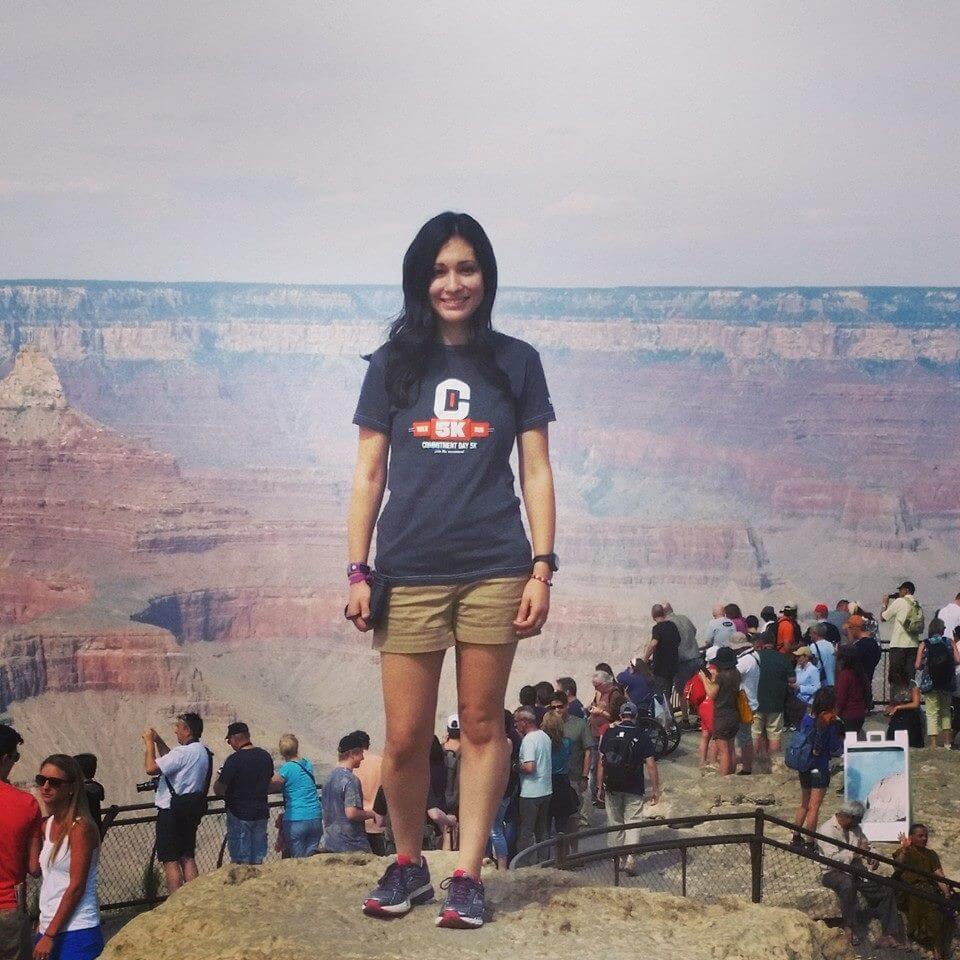 This was the first time I was able to see the vastness of the canyon and what I was in for. Some of the veterans began pointing out certain spots and I just kinda nodded in disbelief that I was actually going to attempt this.

We arrived at our lodge at the South Rim and unpacked. We took a group photo, were given some last minute instructions (and our R2R2R shirts!), and then headed off to the cafeteria for dinner. 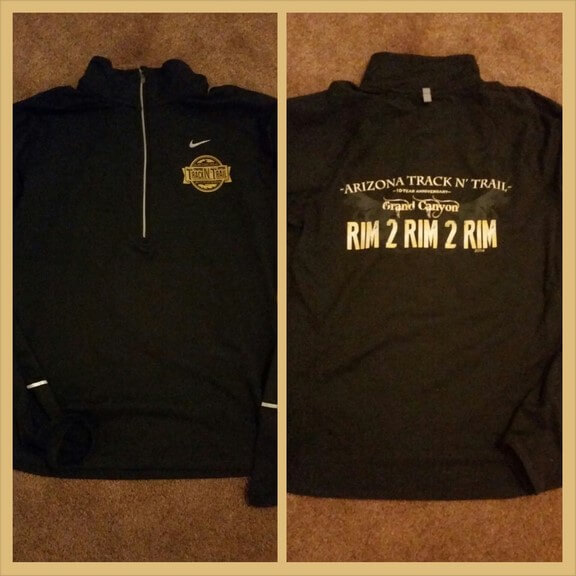 After dinner we headed back to our rooms. I wanted to make sure I had everything ready for the 4:00 wake-up call and 5 a.m. departure. I knew what I needed to have packed but wasn’t sure the long list of items would fit. Thankfully, I was able to comfortably squeeze things in. (I’m obsessed with my Ultimate Direction hydration pack by the way–I plan on doing a review very soon.)

The next morning, I awoke before my alarm. I was so excited for what was to come and not really knowing what to expect was exhilarating. We piled up into the bus and headed for the drop off spot where we then walked to the trail that would take us down the canyon.

I made sure to use the restroom at the top, many of us did. It was here that people broke off into groups and some went solo. I wasn’t sure who I wanted to stick with but I knew that I wanted to be near someone and not go down alone. It worked out that a buddy of mine, Angel, who also likes to take pictures (I took a billion the first day), was going the same pace as me. As we hiked down, we also caught up to one of my favorites, Jill, and the three of us begin our trek. We paced back and forth with three other AZTNT members and we all laughed at how 6 first-timers were going down together. 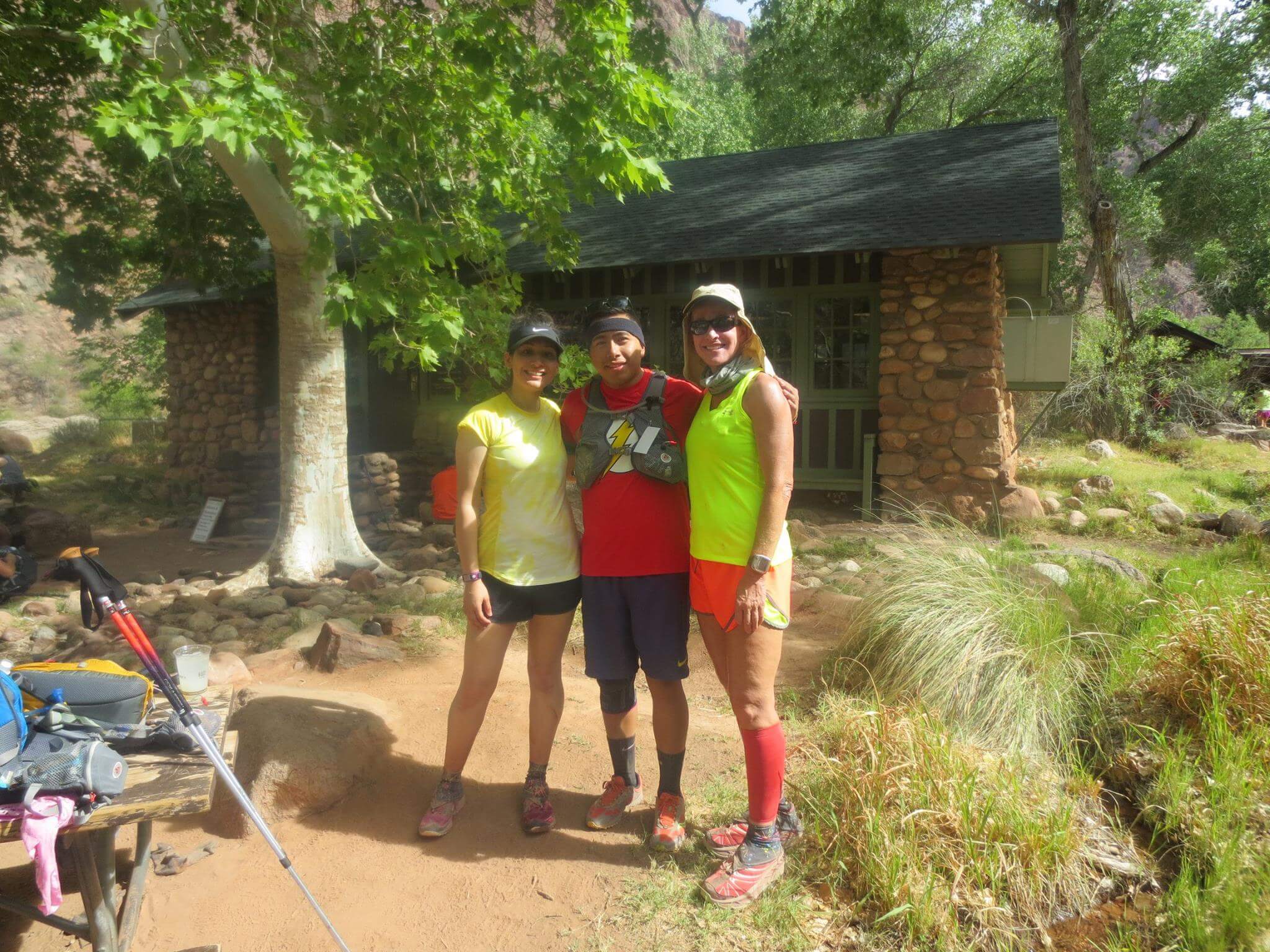 Me, Angel, and Jill

From the very beginning, I was met with views that were absolutely unbelievable. I kept saying to Jill and Angel that it looked fake. There was no way beauty like this can exist in real life. That I was walking amongst it, becoming a part of it. 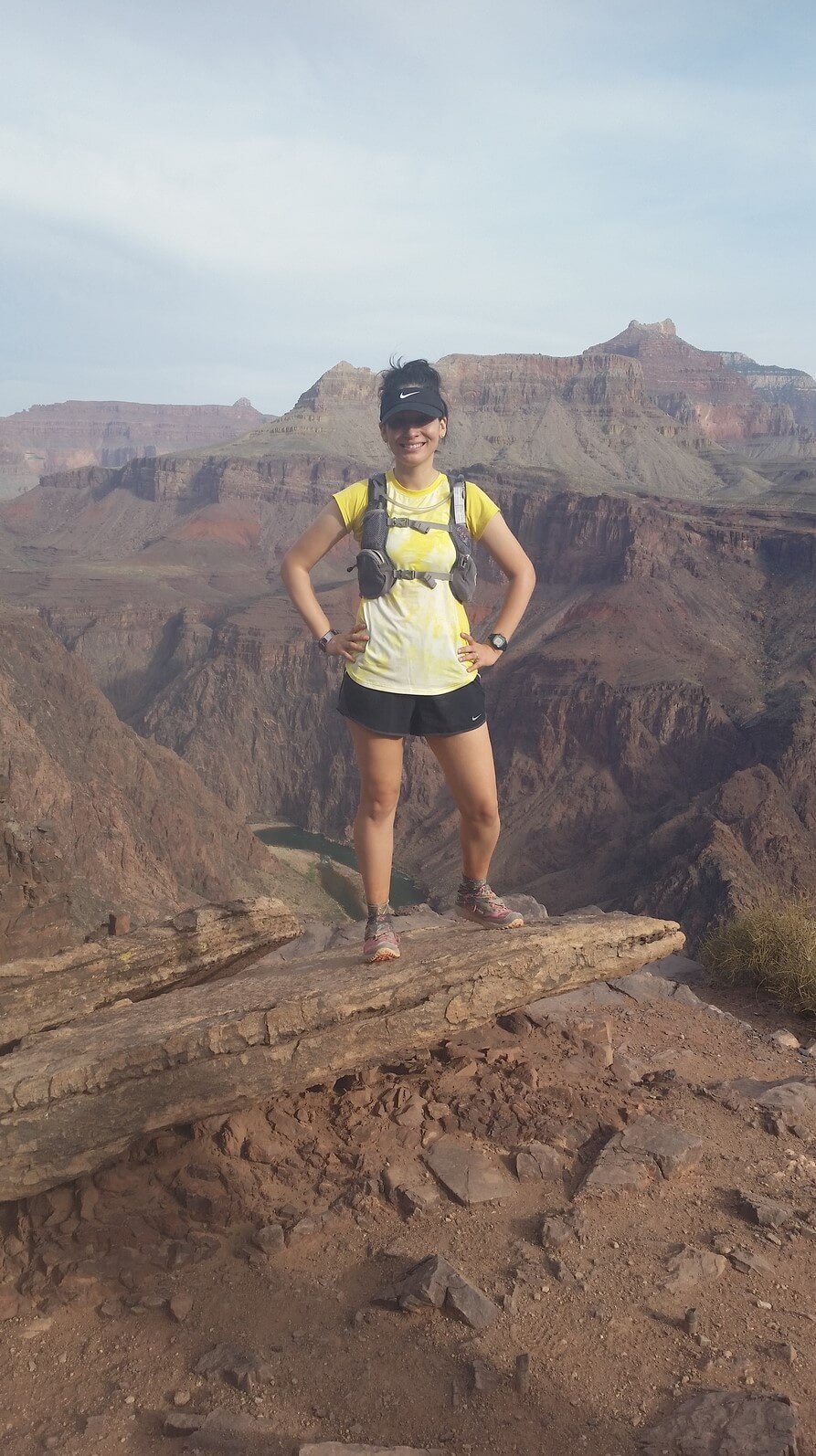 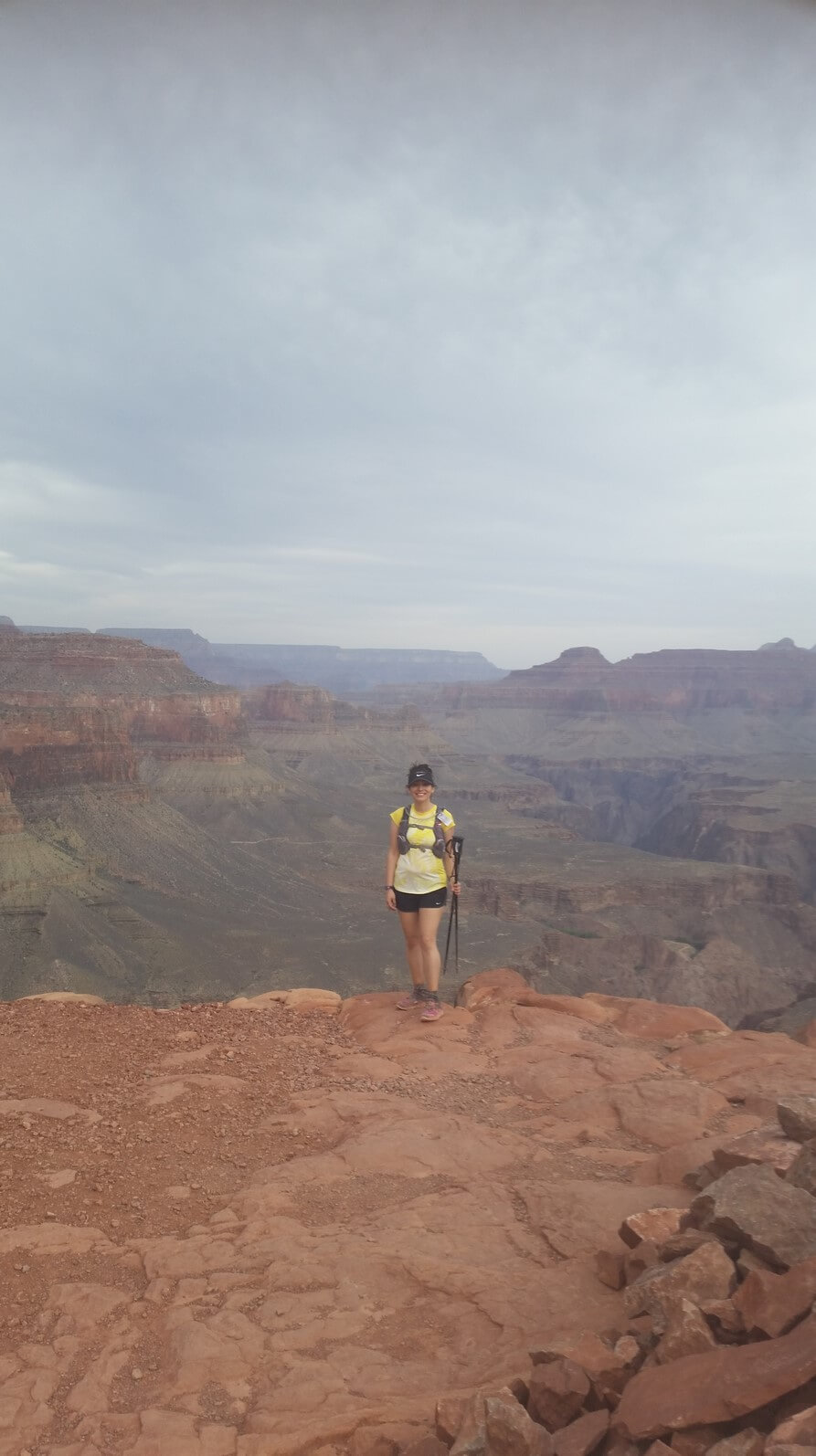 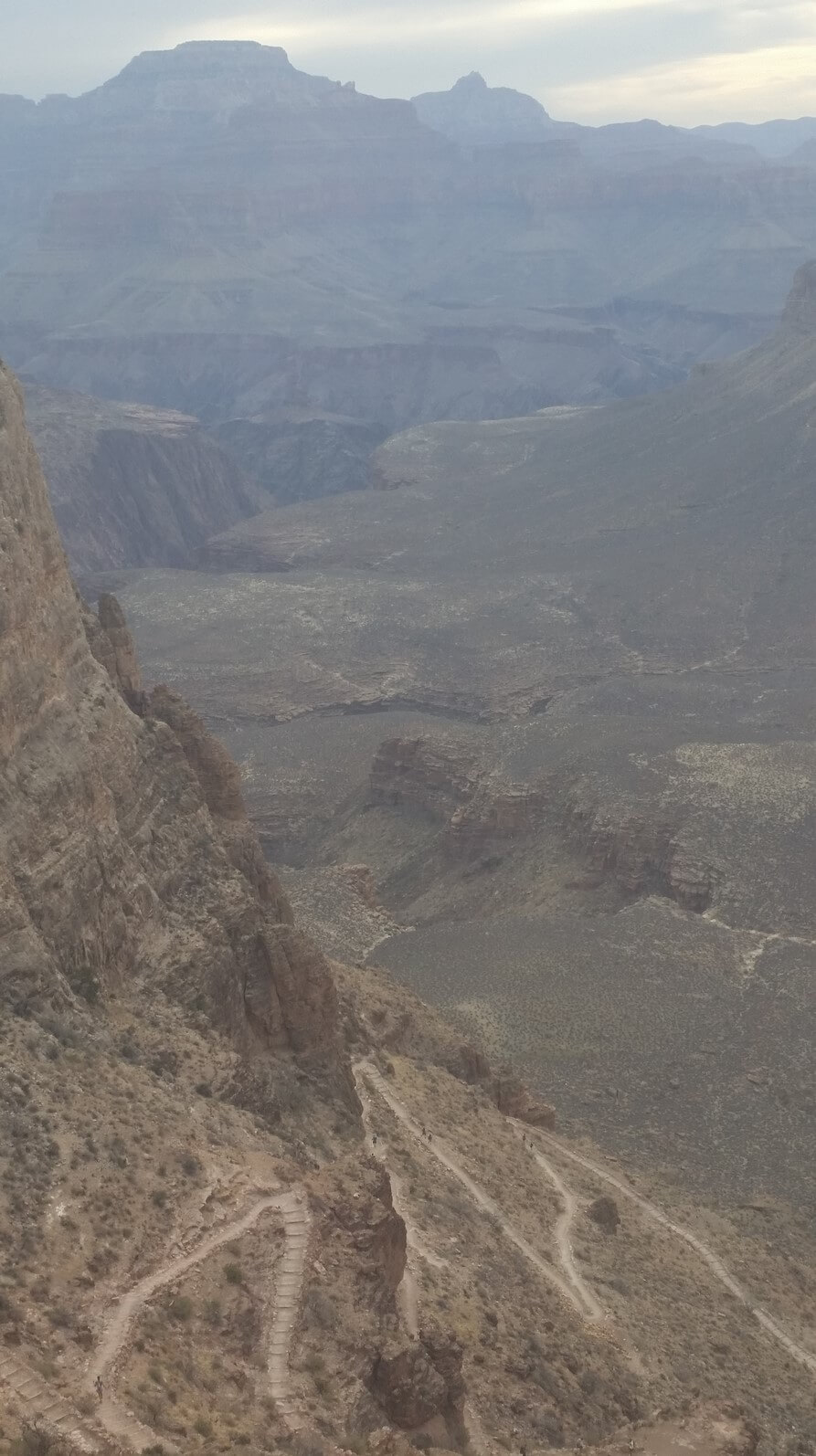 I wasn’t feeling fatigued or hadn’t really noticed the elevation change as we went down. I think I was just caught up with my surroundings to really feel anything. The more we we got closer to the bottom, the more I couldn’t believe how far we’d come and how far we had left. There was just so much to see for miles and miles and miles. 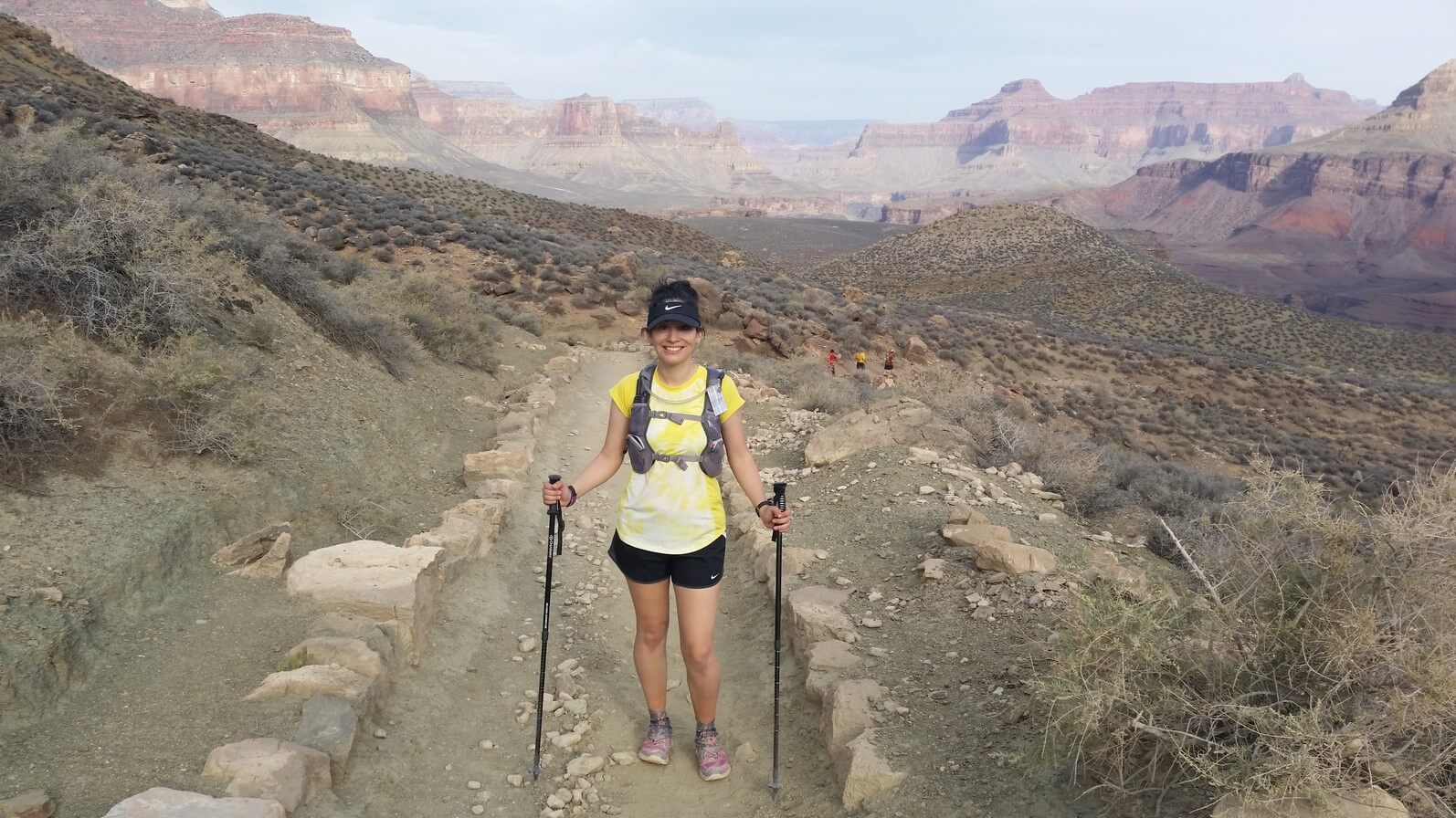 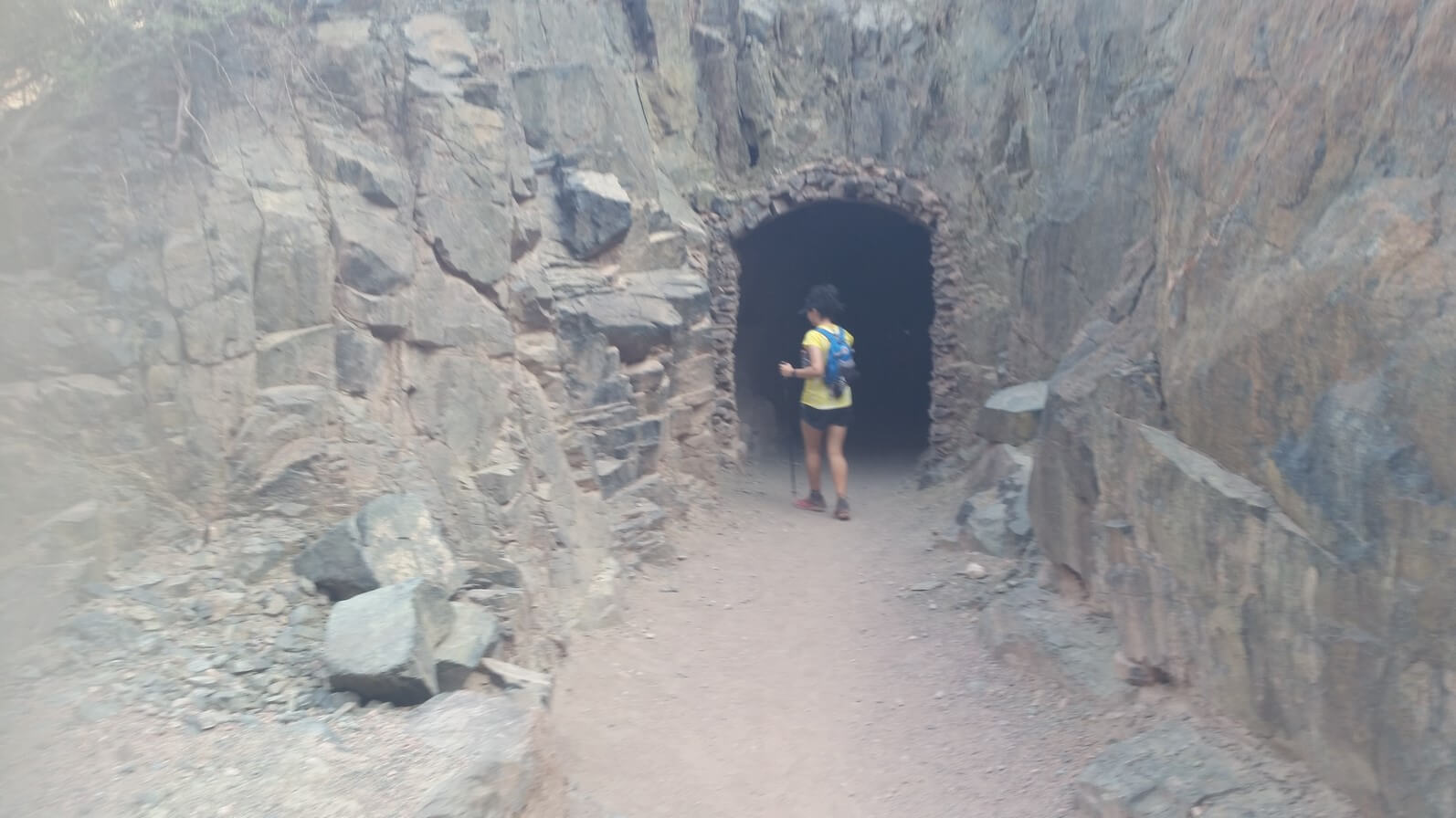 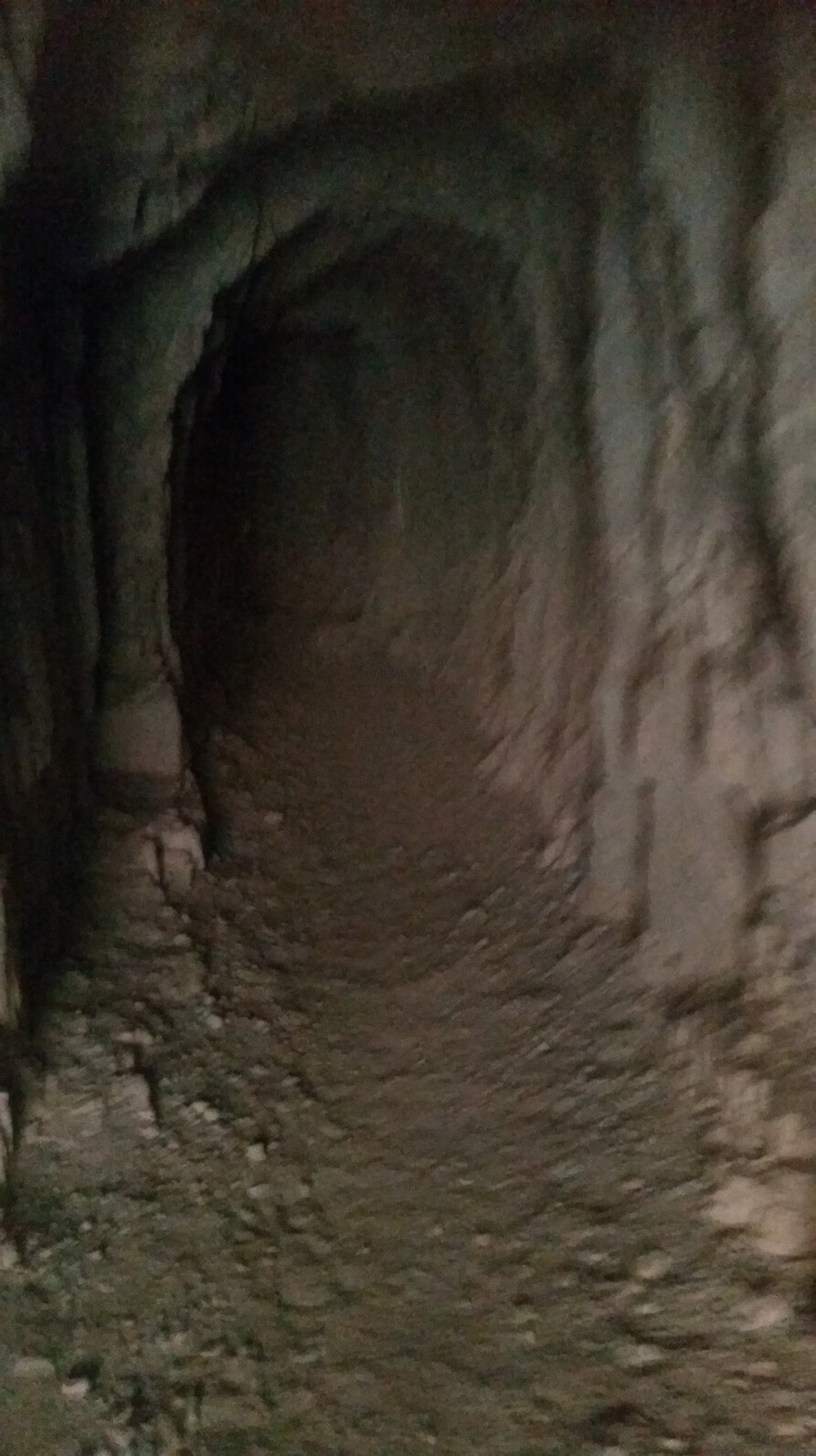 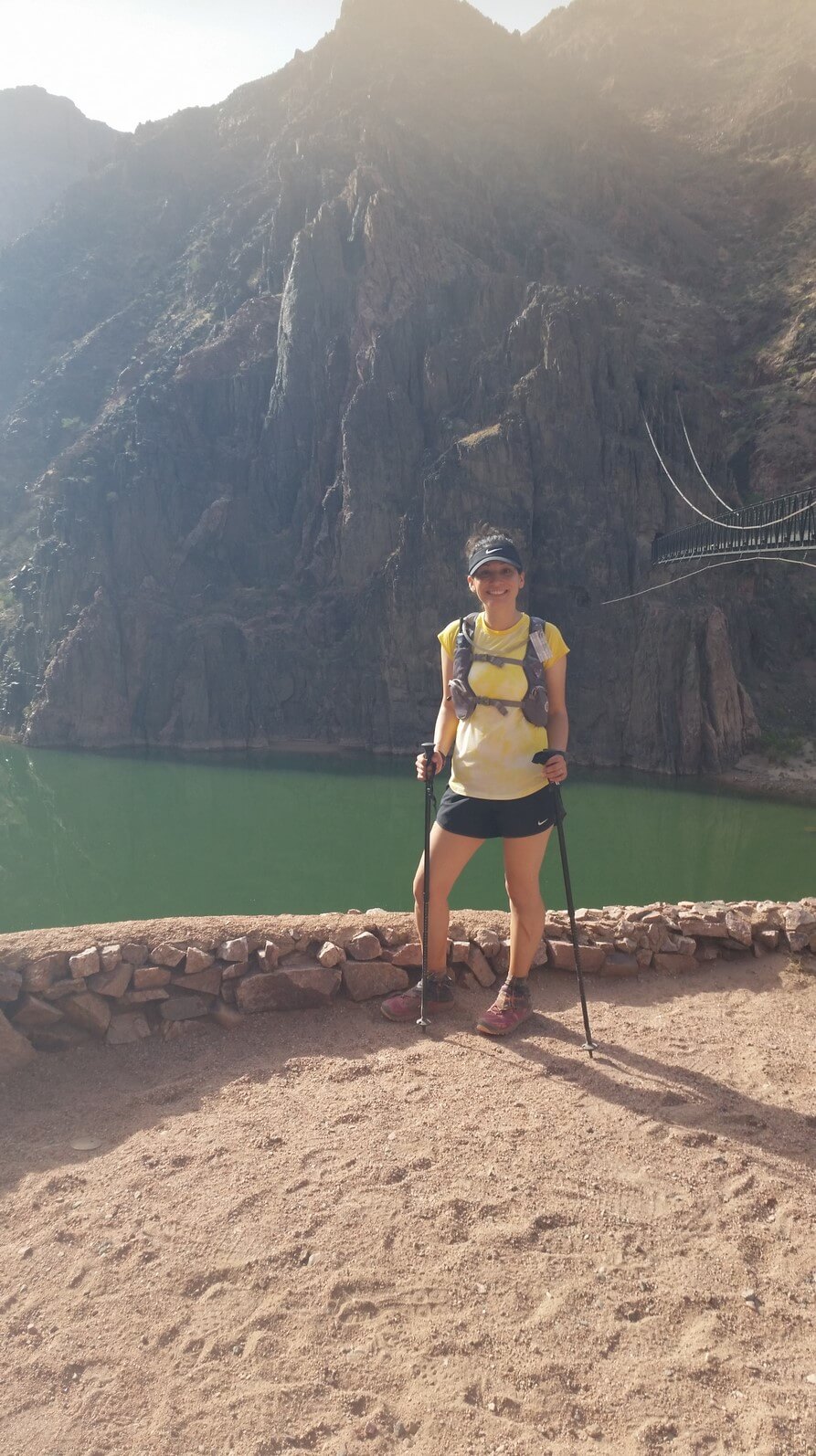 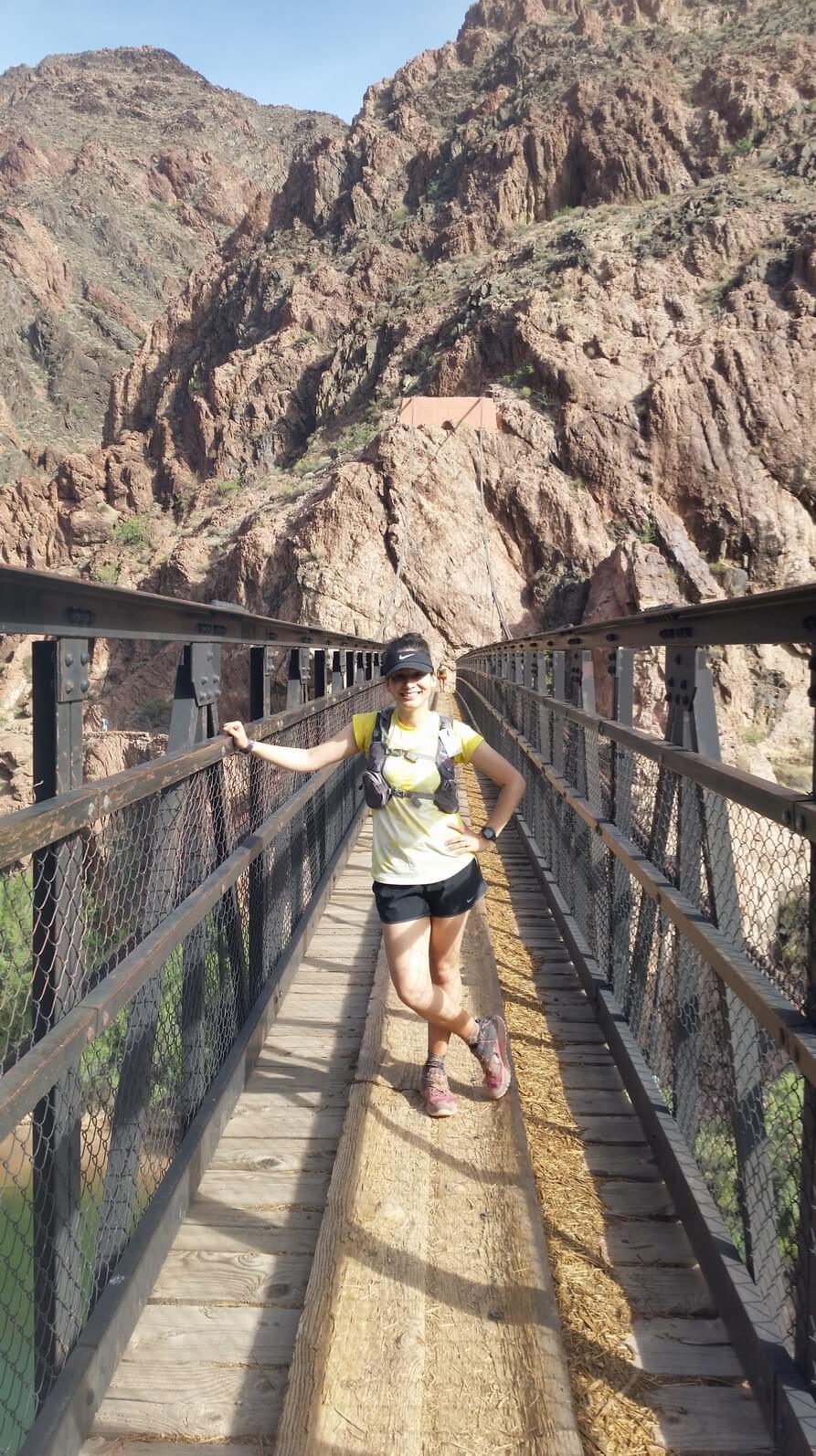 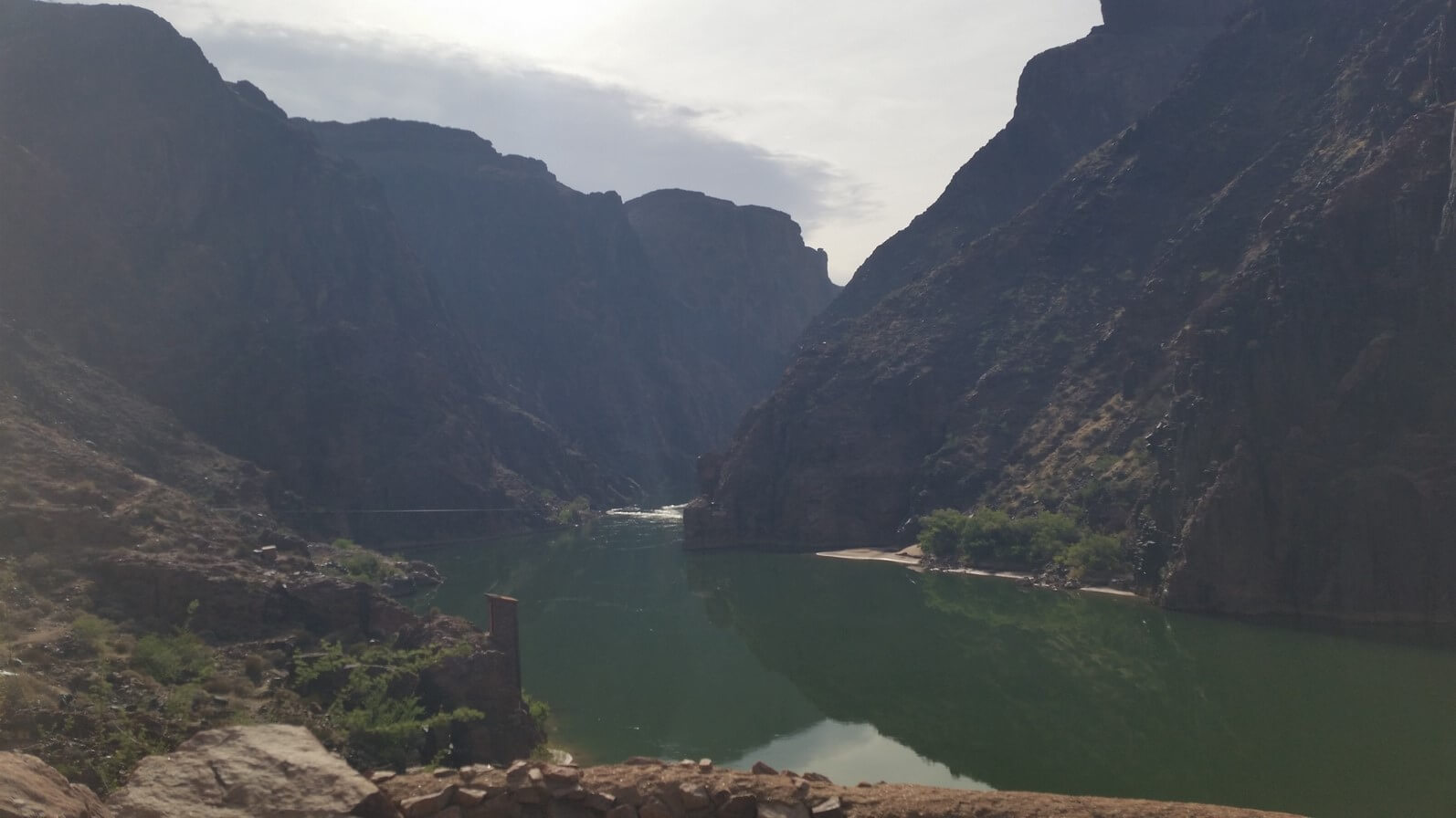 At one point along the trail, we were met by a ranger who asked us if we had sufficient fuel and water. They were backed up on air evacuations from people needing medical attention. She suggested that any creek we found along the way, we immerse ourselves in it to cool us off. We took her up on that at several spots, taking off our shirts and hats and dipping the in the water.

Around 7 miles in, we stopped at Phantom Ranch which was the biggest stop as there were actual things you could purchase there. The little store had drinks, snacks, tables to eat, even a post mail bag. I had filled out a post card for my husband and kids and put it in the bag only to realize later I had forgotten to write our address 😦 major fail. 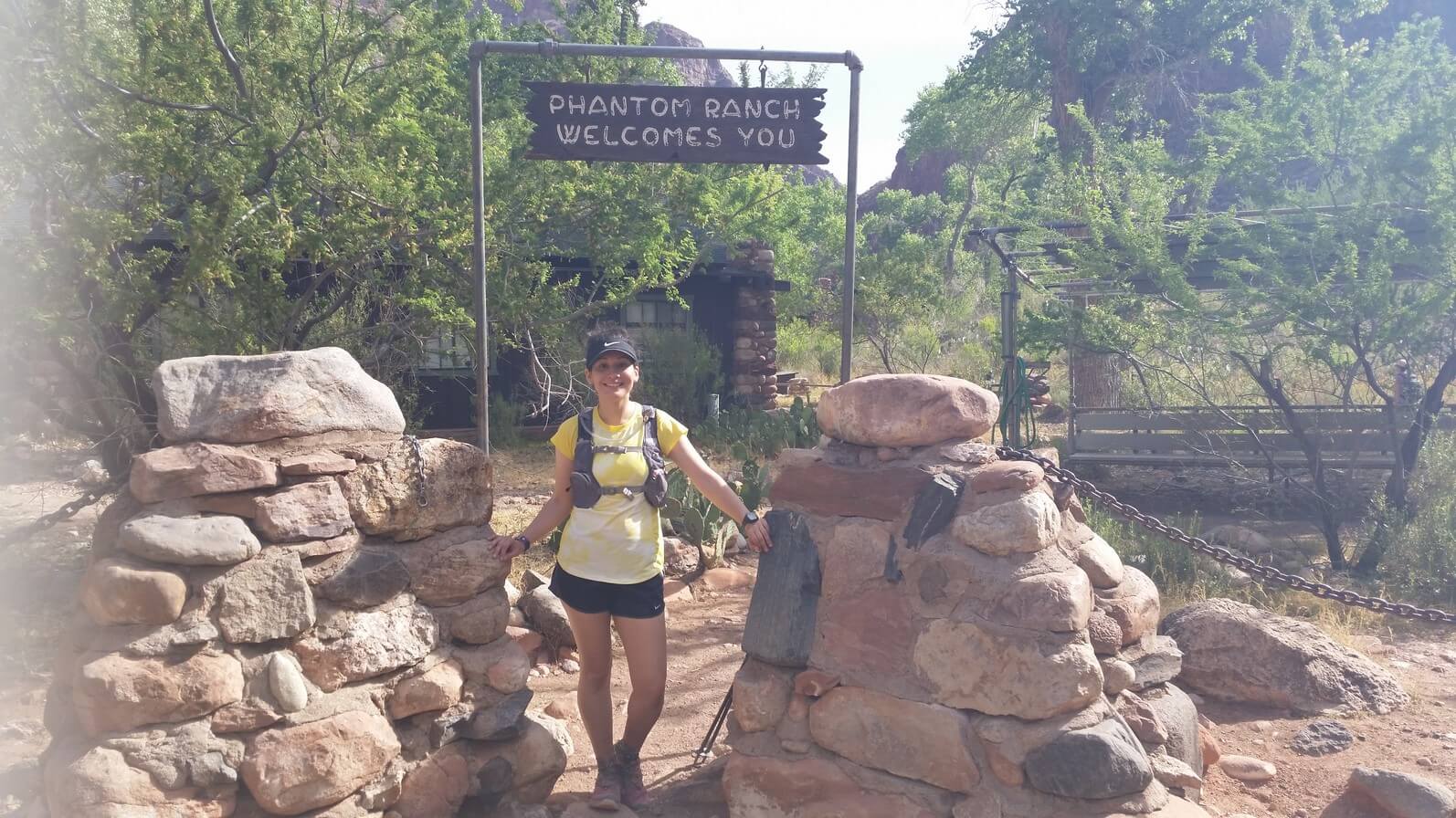 Everyone kept gushing over the lemonade they sold there so I had to buy one and yep, it tasted delicious. Nothing against the Tailwind Nutrition I was drinking, but I welcomed the tartness of the lemonade and gulped every last drop of it. Some people asked me what I had packed to eat. People packed different things but I went with tortillas, nuts, a cereal bar, pretzel sticks, an orange, a Honey Stinger waffle crisp thing, some gummy fruit snacks, and beef jerky. I didn’t eat all of it in one setting but snacked as we went and at each stop.

We filled up our water and continued on our way. Our group decided to take a detour to see Ribbon Falls. The waterfall was less than a mile away from the trail so we figured it wouldn’t take much out of our time and we had heard it was a must see spot. It was. 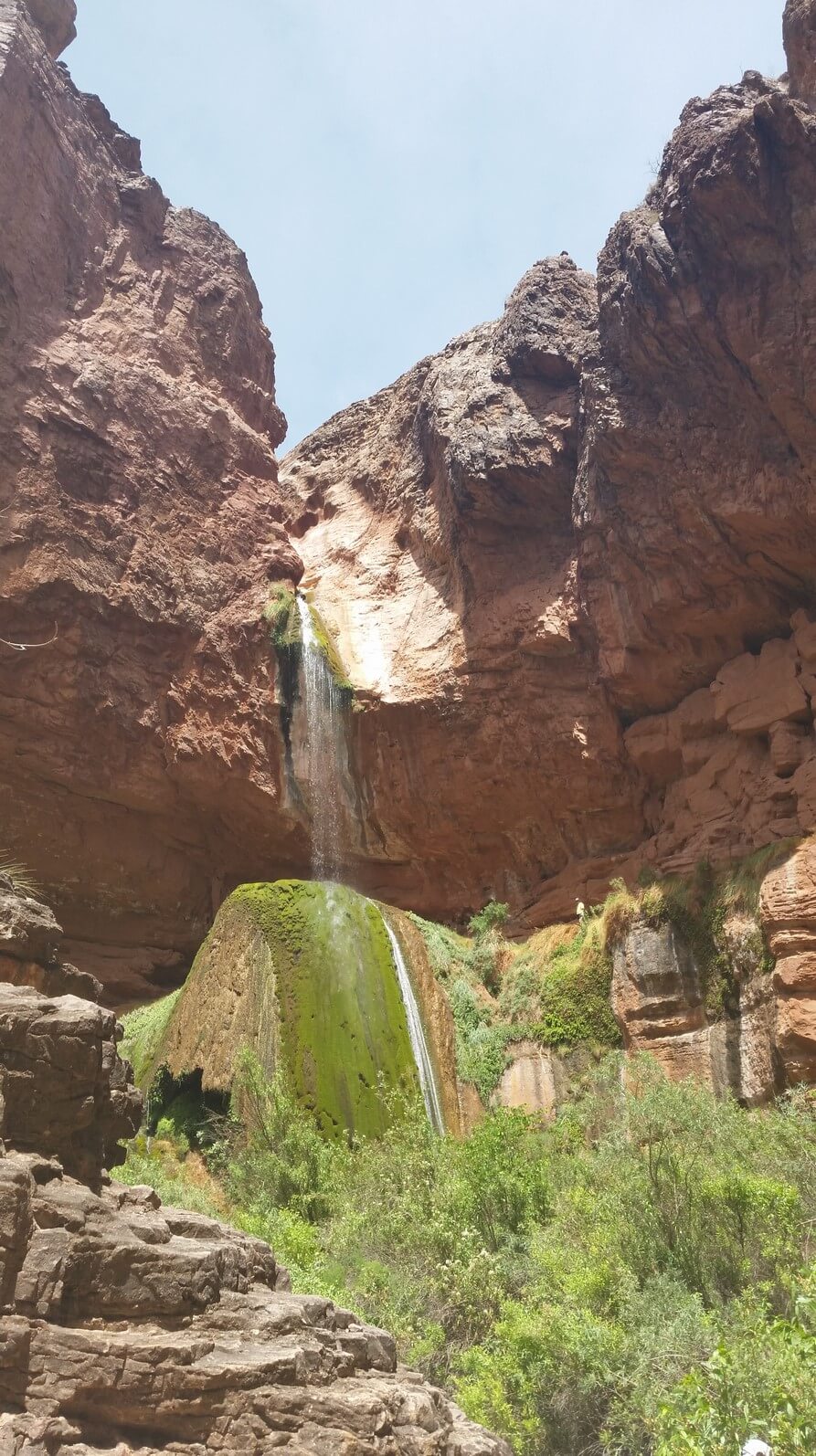 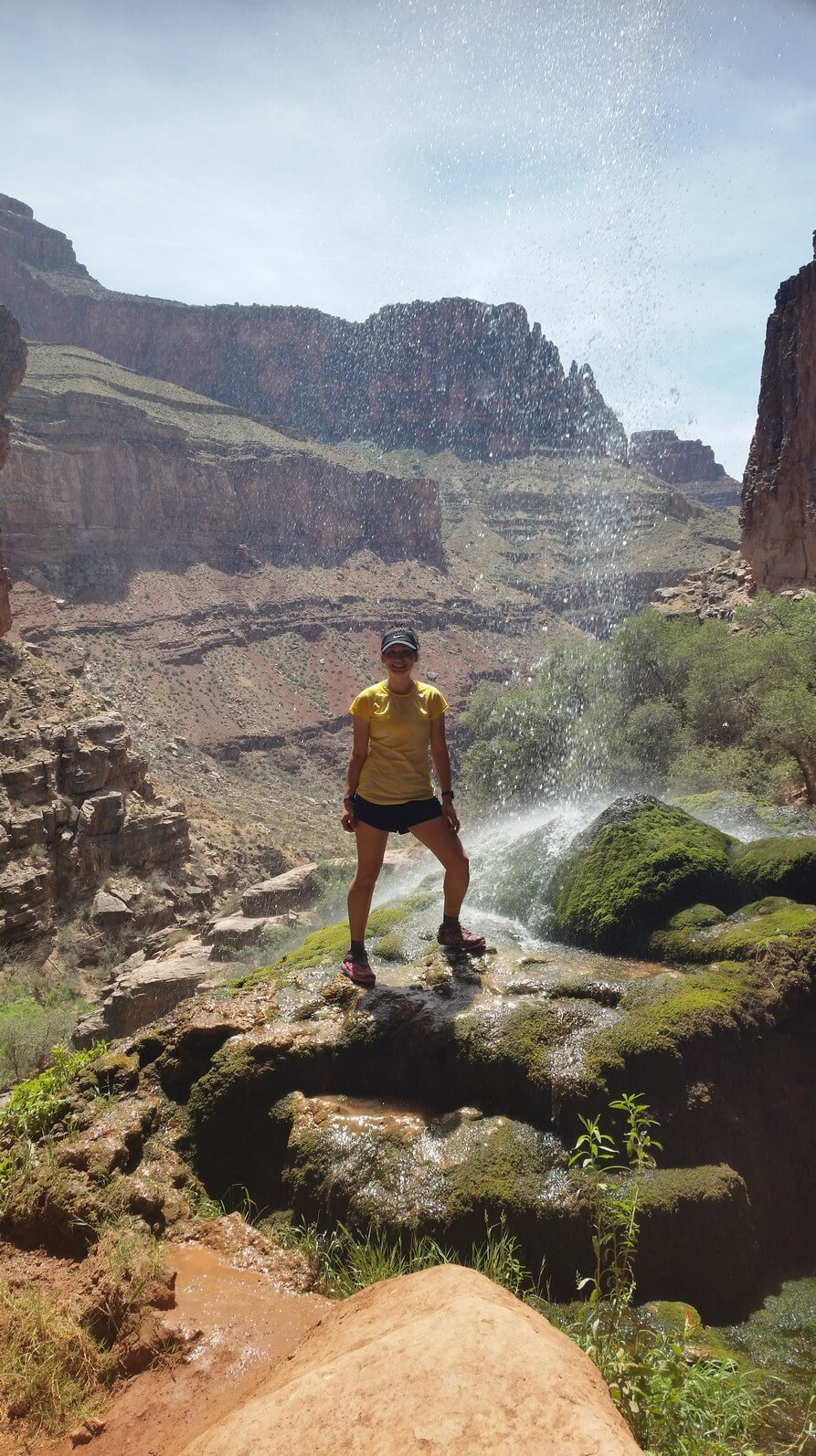 We left Ribbon Falls and remembered that once we reached “Aiken’s Place” that that was when the marathon really began. You know how people say the last 6.2 is when the race really starts? Well that’s what this was like. This was where we started going back up.

There wasn’t a whole lot of picture taking going up. Not only was I really feeling it at this point, the wind was blowing so hard it was actually causing you to sway. Making sure you were paying attention to where you were going took precedence over any photo ops you thought about taking. No matter how pretty the view.

We were climbing up a rather significantly narrow spot when we really felt the gusts. I just put my head down and pulled my cap closer to my face and kept going, making sure I stayed as close to the inside of the path as I could. The drops were pretty intense. For someone not afraid of heights, they made me nervous.

We took our time and as we were inching away, I felt, and heard, a whoooosh!!! And before I knew it, my hat was in the air! Instinct made me reach out for it but luckily I had the wherewithal to draw back and just let it go. I kept moving, my head down, trying not to get dirt in my contacts. The last thing I wanted was to be blinded on a cliff at the Grand Canyon.

Once we made it past the danger zone, it seemed we all breathed a collective sigh of relief. We knew we were getting closer but even being close in mileage didn’t mean we were close in time. Each steep mile was about 30-40 minutes. Four miles meant 2 hours. So close, yet so far.

And by that time, I was ready to be done. I was dirty. I was exhausted. And most of all, I was hurting. My quads hurt from the downhill and my hips and glutes ached with each step going up. My shoulders were sore from carrying my pack. I was just a mess.

Conversation had ceased and quietly, we continued the climb.

As somewhat of a reward, we reached a spot that let us see how far we’d come. How much we’d accomplished. 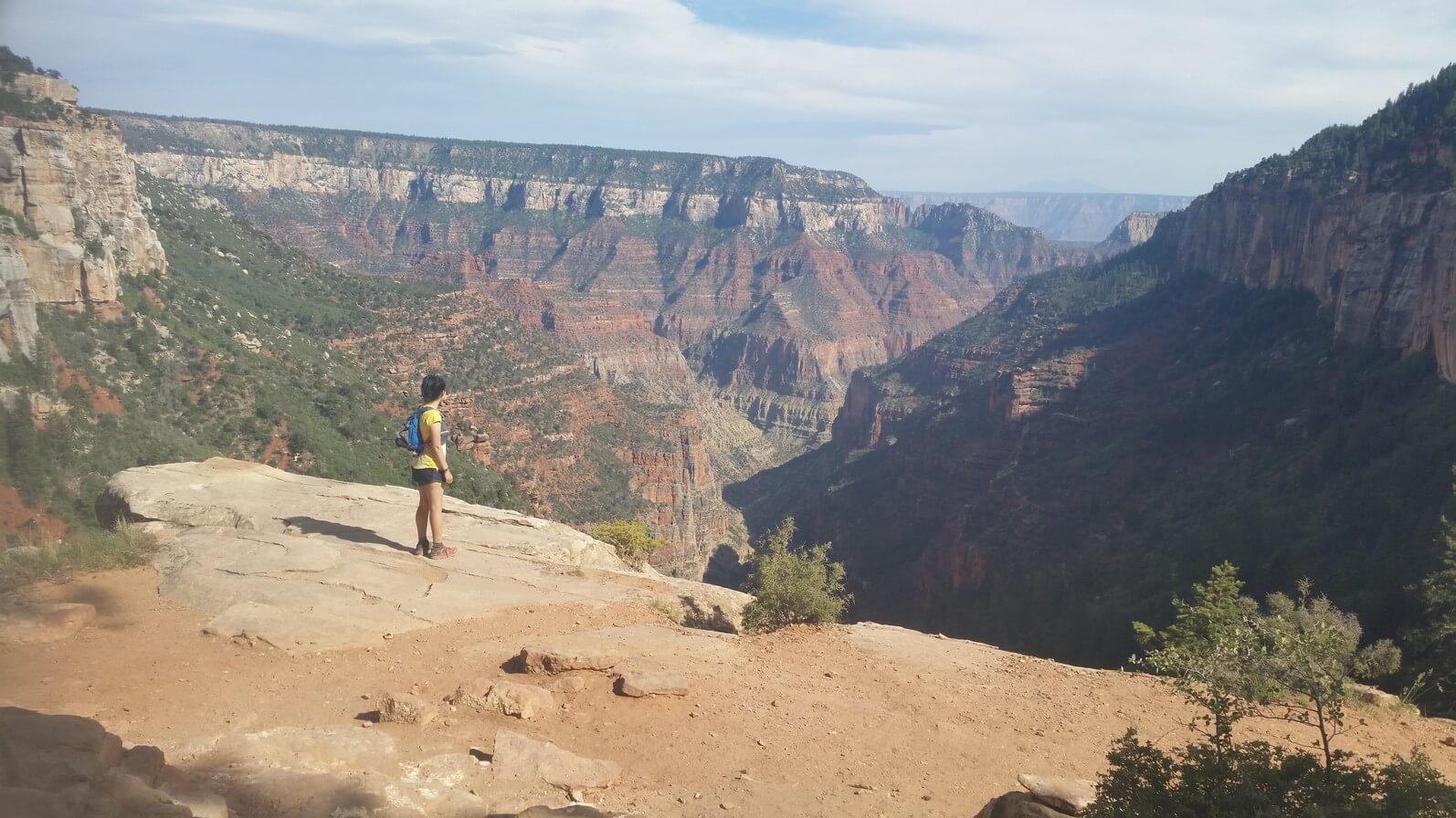 This was the last picture taken on Day 1.

At this point, I still had about a mile and half to reach the top. Our group began to distance ourselves as some had found energy to finish strong, and some, like me, consumed with fatigue, could only shuffle along the trail.

I carried a radio with me and I could hear names being called as they reached the top. I heard Jill and Angel’s name and then I saw one of our group’s leaders who then said into his radio, “AZTNT North Rim, Angelica is on her way.” When I heard this, when I saw him say those words into the radio, my eyes welled up and I could start to feel my body tremble with emotion. I was on my way. Finally.

That last mile and a half were harder than any race I’ve ever done. My body was trying its hardest to convince me to stay right where I was. I knew I had to keep going but I also knew it was around 45 minutes til the end. To think that I could run a 5k faster than what it took me to climb that last mile and a half. That thought didn’t help me at all. But when I heard my name, and knew that I was this time really almost there–it was the extra push I needed.

Almost 11 hours after I’d started and 22.5 miles later, I finally climbed up those last steps. I was met with cheers and applause from my running group and their happiness at seeing me finish put an instant smile on my face. I knew they knew exactly how I felt.

Except any happiness I had about being done was erased with the thought of having to do it all over again the next day. Would I be able to make it? No matter how badly I wanted to do it, would my body let me?

I knew deep down there was no way I was going to let myself miss this opportunity.

Day 2 of my Rim 2 Rim 2 Rim journey will continue tomorrow. Thank you so much for reading and being a part of this special moment in my life!